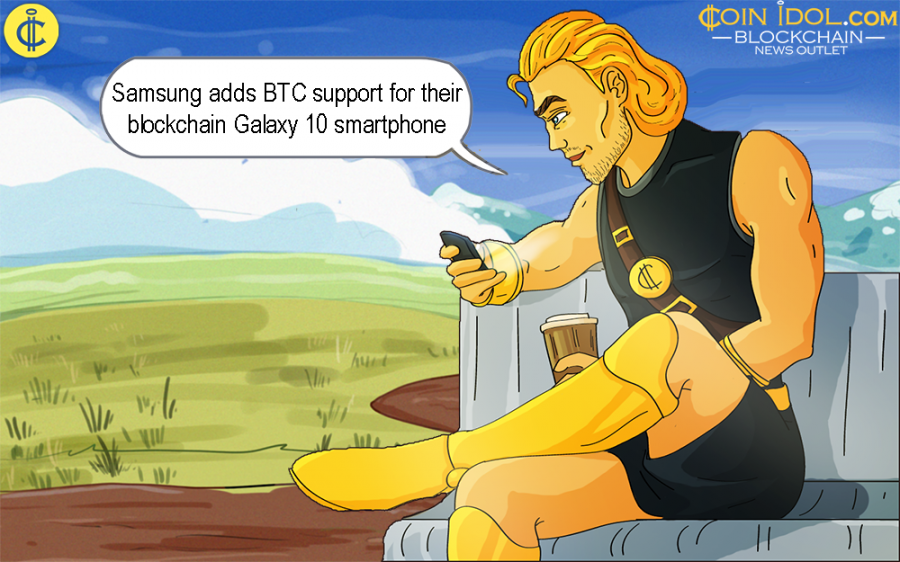 South Korean global electronics conglomerate Samsung adds Bitcoin (BTC) support for their blockchain Galaxy 10 smartphone. The Galaxy phone which supports cryptocurrency was officially launched back in March. Since then, the digital currency community has been seen increasingly purchasing the handset so as they can start trading and using the supported cryptocurrency through the Blockchain Keystore App installed in the phone.

At the time of its launch, the Samsung Blockchain Wallet of the smartphone was only supporting the world’s second leading altcoin by market cap Ethereum and ERC-20 compatible tokens. Meaning that the original digital asset Bitcoin was not supported. However, the logo of Bitcoin was displayed in the pre-release advert pictures, meaning that the technology giant had future plans for it.

Now, from the latest reports, Samsung has revealed that it has also started to support six fresh decentralized applications (dapps) on its new blockchain Galaxy S10 handset following its earlier support of 4 dapps – they are now 10 dapps being supported. In fact, X-Wallet dapp by Pundi X is the one supporting Bitcoin plus other tokens including Pundi X NEM (NPXSXEM), Ether (ETH), Pundi X (NPXS), NEM (XEM) and Binance Coin (BNB), in the new Galaxy S10 blockchain phone.

Some of the important dapps that have been successfully added to the Galaxy S10 cryptocurrency phone include MyCrypto Heroes, Berry Peek, Syrup Table, The Hunters and Misetoktok.

This initiative will see users of Samsung Galaxy S10 get access to the new features of every decentralized application directly via the blockchain-based wallet built in the handset. Furthermore, these newly added dapps will first be utilized by the users who only reside in South Korea and the service will later spread to other countries in the near future.

Of course, this is such a significant triumph for blockchain and digital asset sector, and if other technology bulls copy what Samsung, IBM, Lenovo, Sirin Labs, Wings Mobile, Huawei, Microsoft, LG, HTC, Facebook etc.are doing in this field, then the adoption of Bitcoin and other major currencies will grow significantly in the entire world. The market prices of tokens will also skyrocket further due to their increased adoption.