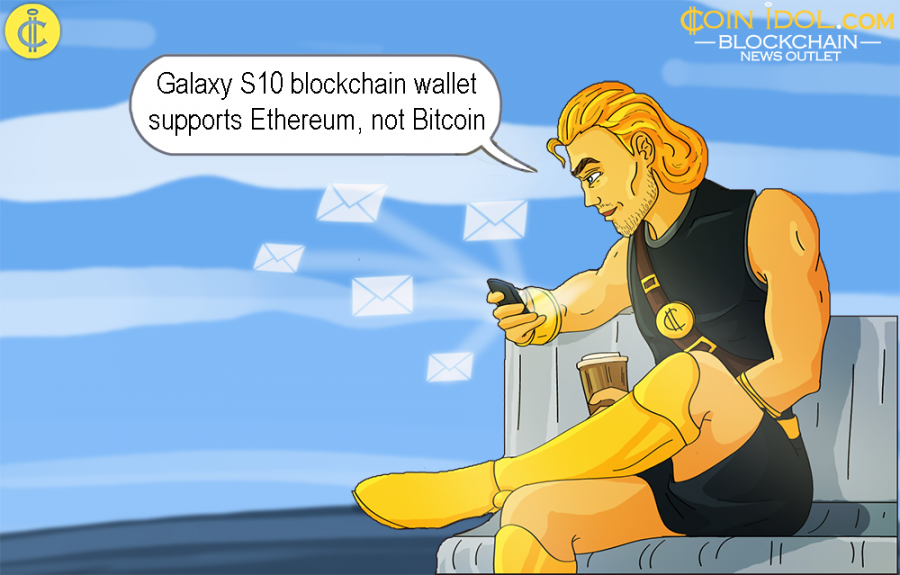 The electronics bull, Samsung has officially declared that the blockchain and cryptocurrency wallet for its Galaxy S10 phone is at this time compatible only with Ethereum (ETH) and Ethereum-derived ERC20 coins. Bitcoin (BTC) and other major cryptocurrencies are not yet supported, regardless of the BTC logo surfacing on previous pre-release presentation pictures.

- Samsung now priming their phones with Blockchain tutorials. The wallet integration on the Galaxy S10 has been confirmed... even after they denied it. Trying to keep Apple on their toes? pic.twitter.com/wAd7EaPzKw

A user can only download the app from S10 smartphones found on Samsung Galaxy Store. The company revealed that it is considering to extend the service to several devices and tokens sooner or later.

This event comes few weeks after the leading electronic conglomerate confirmed that it would provide private crypto private key storage on the S10 device, as reported by Coinidol. Later on, the company uncovered the first particulars of the storage solution - Blockchain Keystore – that seems to possess three key features viz. payments to merchants, crypto storage & transfers, and digital signatures.

“Galaxy S10 is built with defense-grade Samsung Knox, as well as a secure storage backed by hardware, which houses your private keys for blockchain-enabled mobile services.”

The wallet will be exploited alongside Blockchain Keystore and is created to abridge the transactions exercise for beginners to the nascent technology.

The South Korean-based company has given no suggestion as to why it selected to support only ETH out of the forest of coins, and it has also not made any promise or timeline for incorporating BTC or other digital currencies in the time yet to come.

In Jan, 2019,Galaxy S10 demonstrated an off hole-punch display and crypto wallet which at the time supported ETH, as reported by Coinidol.

Tags
Samsung Wallet Blockchain Galaxy Bitcoin Ethereum Cryptocurrency Phone Electronics Storage
Most Popular
Aug 10, 2022 at 10:50
Price
Weekly Cryptocurrency Market Analysis: Altcoins Retest and Challenge Overhead Resistance Levels
Aug 10, 2022 at 09:48
Price
Cardano Declines as It Struggles to Hold above $0.50
Aug 09, 2022 at 12:40
Price
Litecoin Fluctuates in a Tight Range as it Faces Rejection at $64
Aug 09, 2022 at 11:39
News
Around $2 Billion was Stolen in Cross-Chain Bridge Hacks in 2022; Half of the Funds Went to North Koreans
Aug 09, 2022 at 09:51
Price
Ripple Consolidates Above $0.37 as It Challenges the $0.39 Overhead Resistance
More