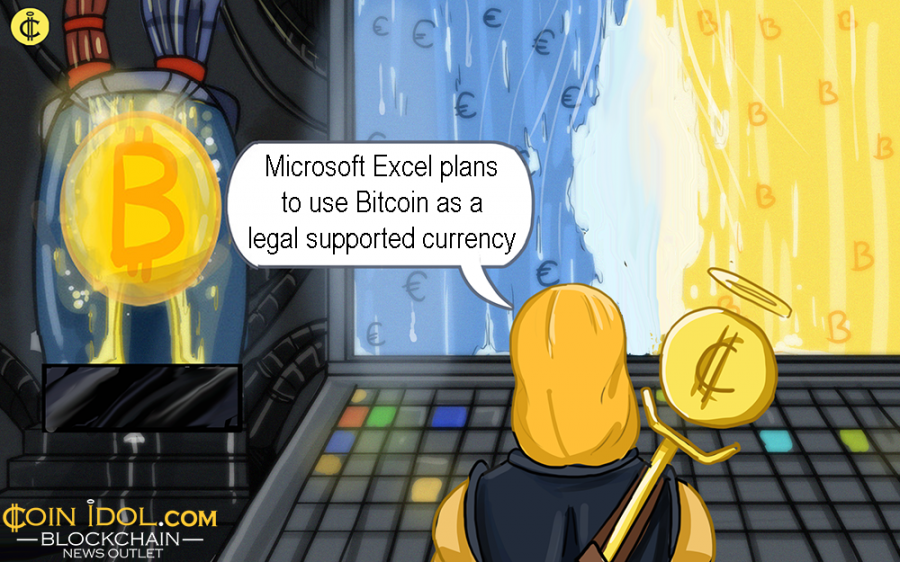 Sooner or later, Microsoft Corporation, a Washington-based multinational technology firm, that develops, produces, licenses, supports and sells PC software, consumer electronics, personal PCs, and other correlated services, will make some changes so that people can use the Bitcoin symbol in Excel spreadsheets when recording information. The technology giant is aware that Bitcoin’s reputation is rapidly growing globally compared to other currencies. However, the company decided to first feature just one leading cryptocurrency by market capitalization, and which is Bitcoin in this case.

Generally, Microsoft Excel, a spreadsheet designed particularly for Windows, iOS, macOs and Android, plans to use Bitcoin as a legal supported currency, according to a Redditor identified as "thepowerx.” There is a post on one of social media platforms displaying a spreadsheet program apparently captured by someone.

But it seems there is limited details regarding the novel currency preference in Excel. There is no person fully informed of the matter who can tell the public when exactly this crypto feature will be integrated into the Excel program, such that the users can start preparing themselves to use the feature. To add on, the validity of the screenshot posted on Twitter is also still uncertain and questionable, and the respondents on social media seem not to be posting any updates, suggestions and ideas concerning the genuineness of the screenshot.

However, Microsoft has been participating in a racing game for cryptocurrency and blockchain technology for so long. For instance, last year, the technology bull revealed its plans to use blockchain in its decentralized IDs App via Microsoft Authenticator App. Furthermore, late last month, the company partnered with IBM and Lenovo to explore the potential of blockchain and other disruptive technologies including Bitcoin.

The company previously launched a project that will enable different companies to flourish in this new epoch of secure multi-party computation by providing open, scalable platforms, and services which will be used to boost the processes they share with other companies.

Azure Blockchain Service is a effusively-managed blockchain service ,which abridges the establishment, management, and supremacy of consortium blockchain systems so various companies can properly concentrate on workflow rationality plus the application creation. Currently, this initiative is being utilized by Starbucks Corporation, an USA based firm and coffeehouse chain founded in 1971 with its operation in more than 30 thousand locations globally, to track coffee. Microsoft is technically working with JPMorgan to make Quorum the first ledger ever supported in the Azure Blockchain Service.