The Application Areas of Blockchain in Italy Besides Bitcoin & Cryptocurrency Without centralized management, in fact, the blockchain and distributed ledger technology (DLT) allows you to send any data in a secure manner, drastically cutting the chain of intermediaries, and thus allowing a secure data exchange between two people and that's it, without having to use third-party media such as an e-mail provider, or an external Cloud Computing service. So let's see which are the main among the new application areas of the Blockchain in Italy and in the world.

The Important Role of Finance and the Growth of "Non Finance" 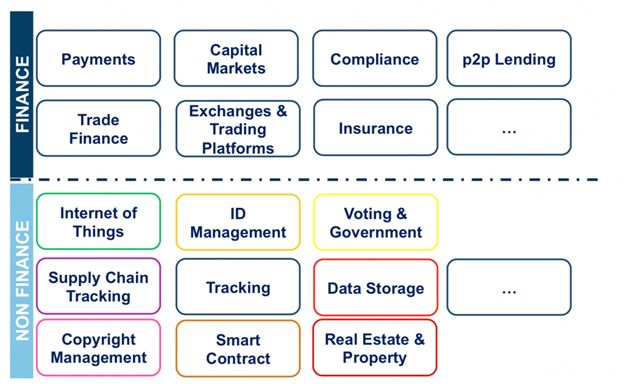 When it comes to the sector of Finance and economics, its where blockchain investors concentrate most for doing any business. They first make a feasibility study and see whether it will be a viable venture. As a matter of fact, since there are no intermediaries to conduct digital transactions, the distributed ledger tech would lower down the costs of the banks' commissions, enabling savings, speed and dependability of undertakings. Blockchain technology helps to increase work efficiency of financial institutions.

Furthermore, according to a survey conducted by Ernst Young, there is a potential use for blockchain technology in the insurance field. In some ways the DLT can enable insurance firms to access to safe, decentralized, transparent transactions, that offers a great engine for combating scams, provide effective governance, and good for storing data.

Also with regard to digital payments, there are great opportunities for blockchain. Obviously there are still many problems that need to be addressed, such as the processing time of a transaction, which is still very slow considering the needs of a market and a world that is going faster and faster.

Because of its reliability and transparency, the tech in question has been widely used to improve the supply chain of Agrifood. A lot of firms now want to trace their containers in transit using the Blockchain. The technology has been used to preserve the food for babies to improve its safety and this has helped to reduce counterfeits in the market.

The tech enables a lot of Italian firms to find new forms of efficiency and competitiveness. Even in manufacturing the Blockchain can be an outstanding associate. Because of DLT, it is now possible to exploit the decentralized logic of the blockchain to create tools which can positively support production, logistics and transport,  as well as supply chain. Furthermore, it is possible to store data in a secure manner, hence creating safety and reliability for the whole stages of the production and supply chain.

The technology furthermore enables solutions for the processing industries, for the management of both the internal and external product logistics and for the handling of supply chain relationships.

Even in the Internet of Things, DLT finds great utility: thanks to its ease of data exchange, in fact, the blockchain technology could be used to facilitate communication between connected IoT objects, in addition to making data exchange safer and faster. The blockchain is then used as a platform for solutions that aim to manage the identity of things. Thanks to the correct identification of this identity, it is possible to create supply chain certification solutions based also on the data coming from IoT and to work on supply chain certification. One of the most significant examples is that of the food supply chain.

As for blockchain and Healthcare, managing patients' medical data through a shared system would allow doctors to share information about patients in a safe and fast way, and therefore it would greatly help medicine and healthcare to improve the service provided to patients, with the possibility of having the entire medical record of a patient under control, and therefore knowing in advance the history of a patient, in order to administer better and faster treatments.

Blockchain for e-voting or electronic voting

Electronic voting has long been the subject of experimentation, but the issue of security has always been unresolved. There are numerous threats and risks related to electronic voting and can be coded in 4 points: Manipulation of public opinion with actions aimed at influencing trends; Identity infringement; System intrusions and data manipulation; and Sabotage actions on voting shares.

The blockchain seems to be an interesting model to use in stores and in Retail: with the blockchain in fact the current payment methods in the store could be extended to Bitcoin, thus allowing customers much faster payments, as well as cheaper. By guaranteeing faster and cheaper payments, a better service can be offered to the customer, which could therefore give a competitive advantage to the stores that decide first to enable these new technologies in their stores.

Copyright management has always been one of the most controversial and complex issues in the record industry. A market that has experienced a real digital transformation before and more than others.

The exchange of musical pieces or their diffusion on a large scale, in the absence of a correct remuneration for the authors and for those who, as arrangers and musicians, contributed to the realization of the musical product, has made discussions and has seen attempts of every kind. Thanks to the blockchain, it is now possible to automate the remuneration, in part, of the chain of authors and contributors to music frogs, to each person's purchase choices.

The "smart grid" brings the concept of "intelligent network" into electricity. People need intelligent management of production and consumption. The Smart Grids use an analytics and exchange platform to manage consumption and production as precisely as possible and, of course, to minimize waste.

The banks have known for some time how to transform the "threat" that came from blockchain (Bitcoin has promised and maintained the possibility of managing transactions and payments without banks) into a great opportunity. An emblematic example comes from the Central Banks and therefore from the main institutions of the banking world which, as the World Economic Forum WEF report clearly stated, actively working on projects that can benefit from the blockchain. The report indicates 10 major priorities but the real key point, the one on which it is important to focus attention, concerns the creation and support of a Central Bank Digital Currency, or CBDC.

13) The Blockchain for the Unbanked

It is a bit 'ugly' to say, or rather to write, but it is a reality and a great opportunity both on a social and on a business level: giving a bank to those who do not have a bank, or to those who do not have access to banking and financial services. We are talking about unbanked, 31% of the world population which in absolute terms means 1.7 billion people. The good example is that of Libra, a cryptocurrency to be launched in 2020 by Facebook.