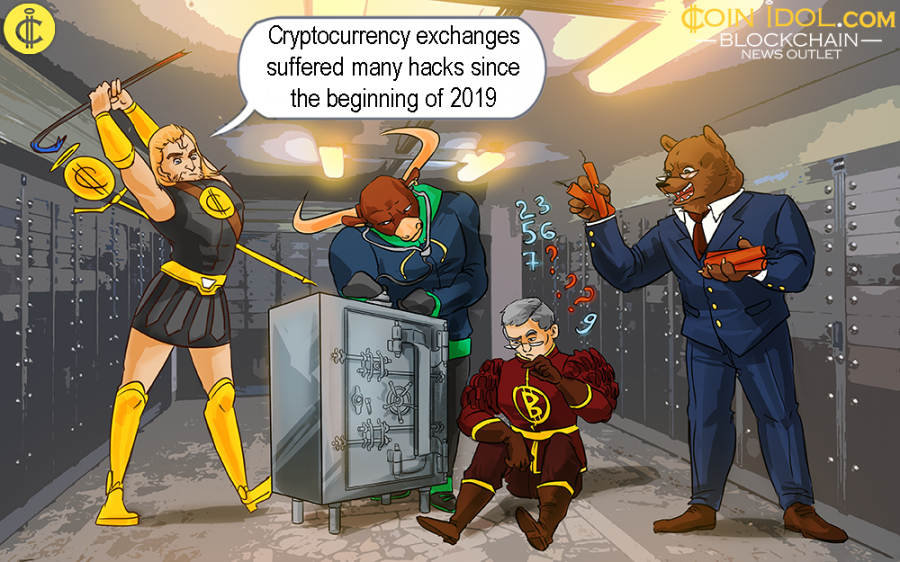 As blockchain, cryptocurrency and distributed ledger technology (DLT) adoption is gaining pace, various kinds of criminals and fraudsters also look into it as means of their illegal activity. Thieves have gained over $356 million from cryptocurrency exchange platforms and users solely in the first quarter of Q1 2019.

The year started with the infamous Cryptopia hack. Hackers and thieves gained around $18 million from the New Zealand (NZ)-based Cryptopia on January 14. In March attackers also gained access to the hot storages of Singapore-based DragonEx and CoinBene and ran away with a combined total of over $46 million worth of ERC20, Ethereum (ETH)-based tokens.

However, CoinBene refuted the allegations claiming that it was never hacked adding that the users’ funds are very safe and secure. But an investigation was done on the hot wallets of CoinBene and found out that around $105 million in digital currency was sent to various platforms such as EtherDelta between March 25 to 28 (period of the hack).

Still in March, Bithumb, a Korean-based giant, faced a severe loss of over $13 million worth of EOS and $6 million worth of Ripple (XRP) to unknown thieves (hackers). Few days after the loss, the exchange revealed that this came as an “accident involving company insiders.”

The Italian giant exchange BitGrail was also attacked and lost over $170 million worth of Nano. The customers of this exchange complained in the courts of law. In February, the bankruptcy court in Italy then ordered the founder of the hacked crypto exchange Francesco Firano, to immediately reimburse all investors/users who became victims.

Last month, the NY Attorney General’s Office uncovered the so-called fraud that involves a loss of over $850 million by iFinex, a company which is behind Tether and Bitfinex exchange. The exchange was then sued for the fraud that happened using Tether funds.

Users suffered major losses of around $195 million when the CEO of QuadrigaCX, a Canada-based cryptocurrency exchange, Gerald Cotten died from India suddenly with the private keys for the cold storage of all exchange’s assets.

Also another Korean crypto exchange Coinbin lost more than $26 million due to internal embezzlement, and this event made the exchange to run into bankruptcy.

Italy lost a lot of money to cybercrime and sextortion. The country lost 10 billion euros in digital currency through online fraud, money laundering, and other industrial undercover operations, according to the Global Risk Report 2019.

In addition, because of the weak blockchain regulations and weak cybersecurity, the country registered a lot of scam and sextortion cases in Q1 of 2019, in fact, 600 euros in Bitcoin – the largest cryptoasset by market capitalization – was lost by sextortion victims in the country. The fraudsters normally threaten that they have special pictures, videos with pornographic contents of the victims, and they take advantage of them to ask for money via Bitcoin.

The UN Security Council also made some comments on the notorious North Korea group of hackers called Lazarus which is being accused of being behind more than five attacks of the blockchain and crypto-related companies.