5 Major Reasons for not Trusting Your Crypto on any Exchange 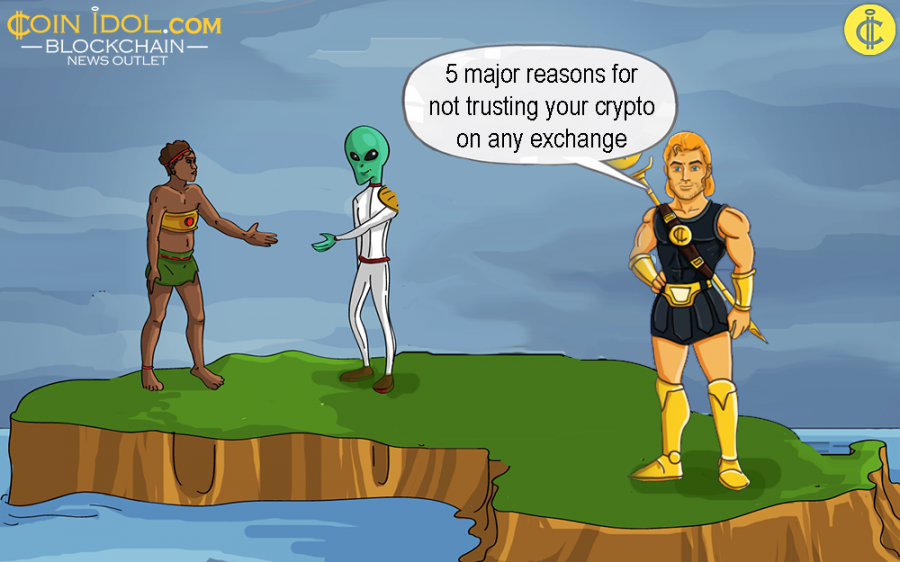 A lot of people with different backgrounds enter the crypto industry without the full knowledge to differentiate between an exchange and a wallet, and some don’t know the importance of private keys and how to use them.

During November 2017, in the hype that saw Bitcoin (BTC) surge beyond $10,000 level, everyone started buying crypto as much as they could, sharing around Coinbase referral links, they mainly wanted to get in instead of learning and researching about the safety of cryptocurrency. They didn’t know how to store their BTC secure.

Because of that, many forgot their private keys and their funds (BTC) are still idle in their exchanges’ accounts like Coinbase – since most crypto exchanges are centralized, they can’t allow you to access your funds on their respective websites unless you have the correct username and password. A user should be the only one holding the private keys in order to gain true device independence.

If a certain company suddenly closes or disappears, your invested funds will automatically disappear with it. So, here are 5 major reasons why it is not wise to leave your tokens in any exchange.

It can be Hacked Anytime

The recent examples are Coincheck from Japan which lost over $532 million from a hack, Cryptopia in New Zealand which lost over $16 million (more than 9.3% or their total holdings), and DragonEx from Singapore which also lost huge funds though still unknown.

Customers of these hacked crypto companies continue to make a lot of loss because of the haircuts they receive. Some attacked exchanges don’t even reimburse their users.

The Owner can Die & Go with Password to his/her Grave

For instance, the owner of Canadian-based QuadrigaCX Gerald Cotten died of illness from one of the hospitals in India. He was the only person who knew the password for the cold storage of the company. After his death, several attempts to recover the users’ funds but every effort refused to workout. Actually, a lot of internet users thought that Cotten faked his own death until the death certificate was obtained from the hospital and shown it to them, though so many things don’t actually add up.

The Exchange may Delist You

This is a common practice especially when exchanges find it unprofitable to keep certain tokens, due to a deficiency in trading volume.

The Company Might Ask you to Give all Your Personal Particulars

The good example is what Poloniex did in 2018. It froze all users’ accounts minus any notice and made them fulfill the Know-Your-Customer KYC) requisites by genuinely verifying their identity and correctly registering all their particulars.

All those users who were not prepared or who did not recognize the changes ended up losing their money. Remember, there was no warning and grace period to enable users to withdraw or sell their coins.

To tell the naked truth, no crypto company is 100% safe. Exchanges should only be used for exchange – that is the only purpose they were meant for. But in case you want to leave some of your crypto on a particular exchange, make sure you leave a certain amount that you can manage/afford to lose. As the proverb goes “Never put all your eggs in one basket,” the same should be done to your coins.