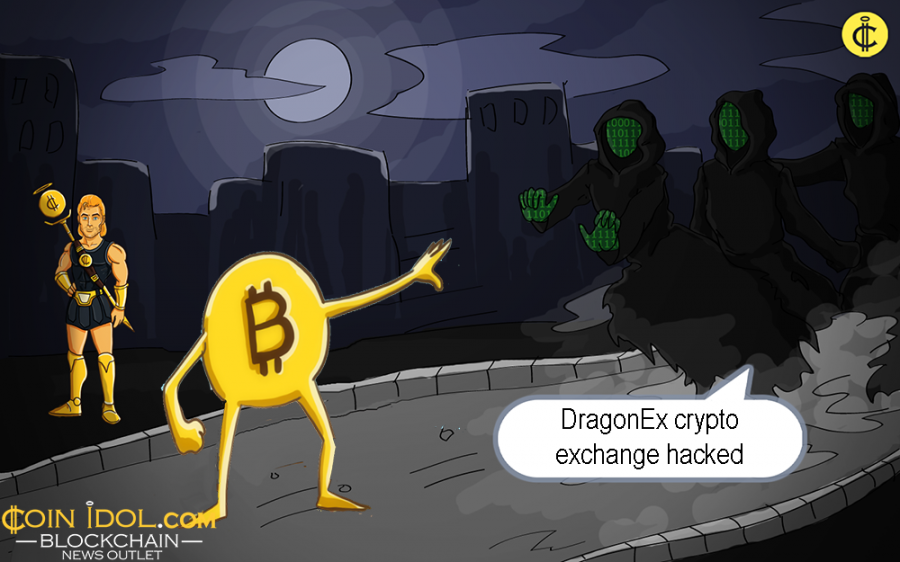 Giant Singapore-based crypto exchange DragonEx announced on Tuesday March 26, that its platform has been attacked by anonymous hackers who escaped with a weighty amount of user funds. The overall amount of stolen funds is not yet known.

DragonEx is the 32nd biggest exchange globally by 24-hour (daily) trade volumes, trading more than $181 million in the past 24 hours.

Using its Telegram account, the exchange revealed that it was unsuspectedly hacked on Sunday March 24, and after the event, the company immediately alerted various authorities such as Judicial admins, police, etc. in countries including Thailand, Hong Kong, Estonia and Singapore. The team from DragonEx disclosed:

“Several Judicial administrations were informed about this cybercrime case including Estonia, Thailand, Singapore, Hong Kong etc. and we’re assisting policemen to do investigation. All platform services will be closed and the accurate assets loss recovery situation will be announced in a week.  For the loss caused to our users, DragonEx will take the responsibility no matter what.”

The administrator of DragonEx’s Telegram account Joanne Long, revealed that the team has successfully identified the stolen funds. The team also discovered that the stolen funds were wired to know Your Customer (KYC)-enabled exchanges such as Bittrex, as Joanne said.

Earlier on Tuesday, the Singaporean hacked exchange shared the wallet addresses alleged to have the stolen funds. 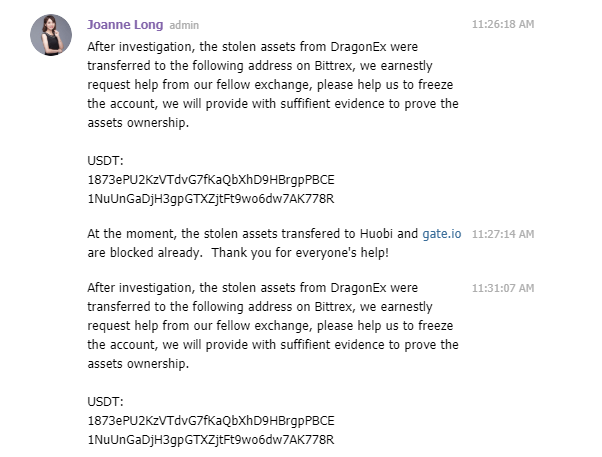 Due to the increasing cases of hackers attacking crypto exchanges, several exchanges are considering to start storing their funds to robust cold storage systems.

Cold Storage Could be a Major Solution

There is a clear evidence that those exchanges who keep their funds in cold storage have never been hacked in any way since their inception. The good examples are Coinbase, Gemini, Binance, Kraken, etc. Cold storage is an offline crypto wallet which can’t be accessed or compromised by attackers.

The hacked DragonEx has confirmed to the users, that it is considering and committed in recovering their stolen funds and is prioritizing on compensation process.

DragonEx is not the first exchange to be hacked, in January this year, the unsuspecting New Zealand (NZ)-based crypto exchange Cryptopia was hacked twice in a period of two weeks. The exchange lost around 9.4% of their total holdings.

Update: We have resumed trading on 40 trade pairs that we have quantified as secure. We will continue to expand this list as we clear more coins.
— Cryptopia Exchange (@Cryptopia_NZ) March 19, 2019

After several investigations by different authorities, Cryptopia was given a go-ahead to continue with their cryptocurrencies trading activities. The exchange is now operating normally, but it seems that most of users faced a 15% haircut for Bitcoin (BTC) and Ethereum (ETH) has 100% haircut.