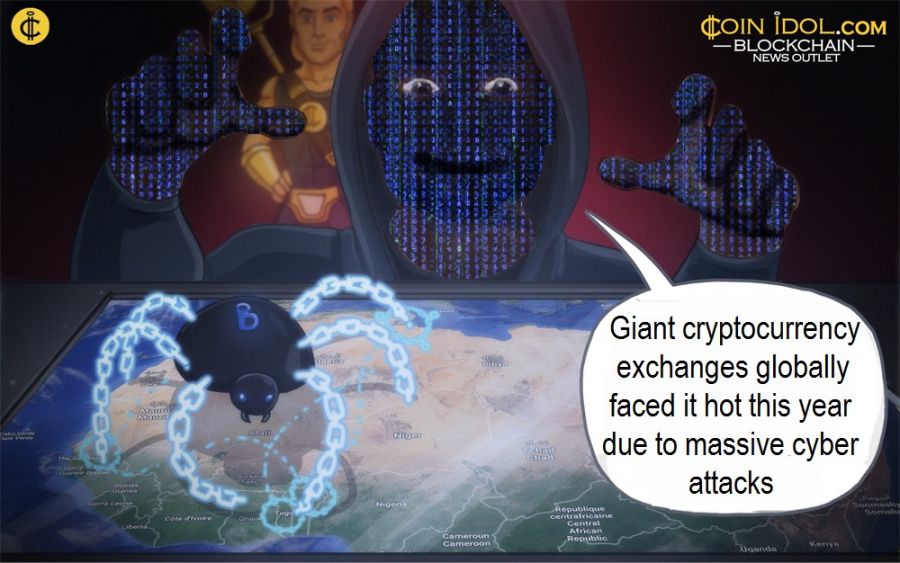 A couple of giant cryptocurrency exchanges globally faced it hot this year especially after experiencing repetitive attacks from unknown hackers. Due to these attacks, both the investors and exchanges lost billions and billions of their money. This year saw quite a few weighty hacking episodes, we have brought you some of the major breaches of 2019.

Yes, cryptocurrencies are decentralized hence highly secure since the underlying technology behind them is blockchain and DLT, however, most of the companies holding them are still centralized and because of that, they have become a major target by cyber attackers.

The first exchange to be hacked was the New Zealand (NZ)-based Cryptopia, that was hacked twice in January. The exchange lost more than $2.5 million in Ether, $1.2 Mln worth of CENNZ tokens. As coinidol.com, world blockchain news outlet, have been reporting, Cryptopia was forced to close by the police, demanded refunds by users, dragged to the courts of law, liquidators employed to make assessments, and the investigations and other processes are still ongoing.

The largest hacked cryptocurrency firm was Binance - the biggest exchange in the globe based on trading volume – that happened in May, 2019, leading to the loss of over 7000 Bitcoin (approx. $50.232 million). The hack was due to a mixture of malware and phishing attacks. Thanks to the big size of Binance, that allowed it to recover some money and reimburse its users. The exchange was able to bounce back and as we talk right now, it still tops other digital currency exchanges in terms of trading volumes.

The user-friendly attack was that of the South Korea based exchange Bithumb, that was hacked in May this year and saw the firm losing more than $20 million. The attack is somehow different compared to how others were hacked – the hack was attributed to an insider – and this triggered massive debate in the industry especially on the trust in centralized platforms. Luckily enough, its only Bithumb as a company that lost all the money stolen was from its own reserves, this means that no single client lost his/her money stored/deposited/invested on the exchange.

Another popular wallet breach is from GateHub that happened in June during the time when the cryptocurrency bull run was climaxing. More than $10 Mln in Ripple was illegally whipped by unknown thieves. The hackers managed to gain fund’s access through compromising the API of the wallet.

The most mysterious attack is that of CoinBene that stretches way back to March, 2019. The exchange realized it late that the hot wallet was slowly becoming empty. This raised concerns among the users and analyst. No one knows the exact amount of funds that was stolen. CoinBene had to come out and address the users, and it assured them that nothing happened – that it was business as usual – claiming that it was just a maintenance issue that paralyzed the day-to-day operations of the exchange.