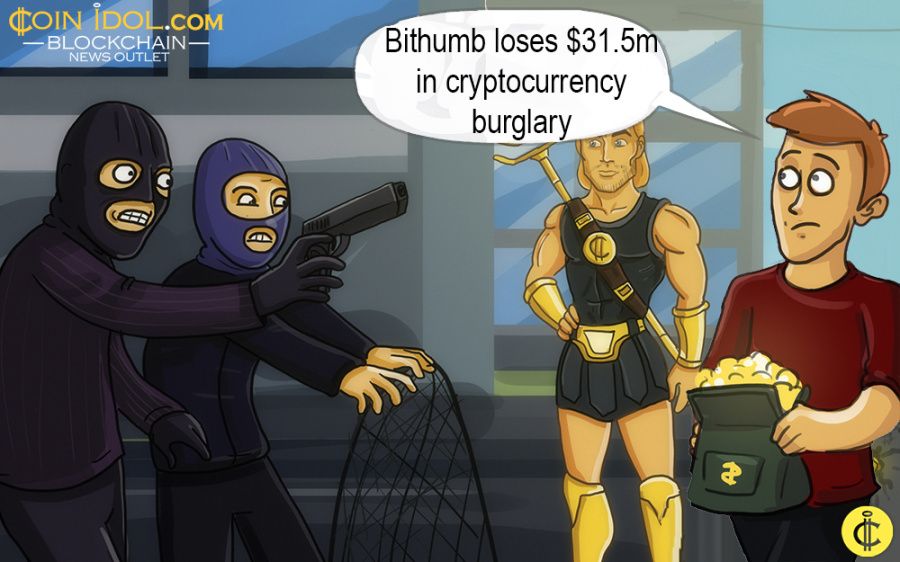 Bithumb, a South Korean cryptocurrency exchange revealed that hackers stole $31.5 worth of virtual coins, the second local crypto platform targeted within one week as cyber thieves showed the huge negative outcomes of selling and purchasing the digital asset. Bithumb trades over 37 different coins.

Bithumb notified the public that it had paused all crypto dealings after discovering that some of their cryptocurrencies valued 35 billion won ($31.5) were grabbed in a period between late Tuesday and early morning Tuesday this week.

Weakness in the Cryptocurrency Regulatory Guidelines

The exchange claims to have kept all the customer's assets in "safe cold wallet" that work on exchanges that are not exactly connected to the internet and the assured all its customers that they will be fully compensated.

The loss of these cryptocurrencies exposes the weaknesses that exist in the global cryptocurrency market regulations and the cyber insecurity, and this has motivated global policymakers to caution crypto investors to be more vigilant when trading digital currencies since there is inadequate regulatory oversight.

What do Blockchain and Cyber Experts Think of this Loss

A senior professor at Korea University Blockchain Research Institute,  In Ho, noted that the grabbed coins were probably from the more unsafe 'hot wallets.' Bithumb did not come out to disclose whether the stolen coins were kept in its cold wallets or hot wallets.

The Blockchain professor said that since coins stored in the cold wallets are never connected to the internet, it's impossible for any kind of hackers to steal them, except if they physically break in.

Mun Chong-hyun, Chief Analyst at ESTsecurity indicated that hackers around the globe are highly targeting these digital assets.

Chong-hyun further noted that no security regulations or measures can completely assure the safety of virtual coins claiming that it is reserved anonymously and in a vaguely secured system which exposes them to be a number one target.

Nate Flanders, the co-founder and CEO of Mandala, digital asset exchange, that also has experience in online marketing and software development stated to Coinidol:

“Increasing regulatory standards in the space should not impact the frequency or severity of cyber attacks. If anything it should become a mitigating factor, forcing organizations to develop compliance standard to combat a threat and protect their customers. In the case of Bithumb, I don't think regulation is why the hack occurred, but they deserve some appreciation from the market participants for reimbursing the affected users! Mitigation of threats and attacks in the cyberspace will be a constant battle. Organizations who are proactive in educating their teams, and developing an internal cybersecurity program will be able to recover and withstand cyber threats, making the industry stronger.”

This is not the first time the Korean crypto exchange is hacked, on the 11th June, Coinrail claimed it was hacked. This happened after a big theft at Japan's crypto exchange Coincheck of over a half billion dollars worth of digital of digital currency.

South Korea prohibited the application of anonymous bank accounts for virtual coin buying and selling to halt cryptocurrencies being applied in supporting terrorism,  money laundering and many crimes but the government claims that it was not done intentionally to close down local crypto exchanges.

Tags
Bithumb Cryptocurrency Hack Platform Trading Blockchain Exchange Regulation
Most Popular
Apr 12, 2021 at 13:04
News
Ripple Is a Step Away From Outperforming Binance Coin by Market Cap
Apr 12, 2021 at 12:11
News
Ethereum Slumps Below $2,150, Unable To Sustain Above $2,200 Resistance Level
Apr 12, 2021 at 10:38
News
Bitcoin Breaks above $60,000 Support, Struggles to Resume Upside Momentum
Apr 12, 2021 at 08:15
PR
MyCryptoParadise Opens the Door to Trading Like a Professional With the Best Crypto Signals Being Offered Today
Apr 11, 2021 at 11:11
News
Female President of Tanzania Expected to Mitigate the Climate for Cryptocurrency in the Country
More