Could Nexit Influence Bitcoin Price As Brexit Did? 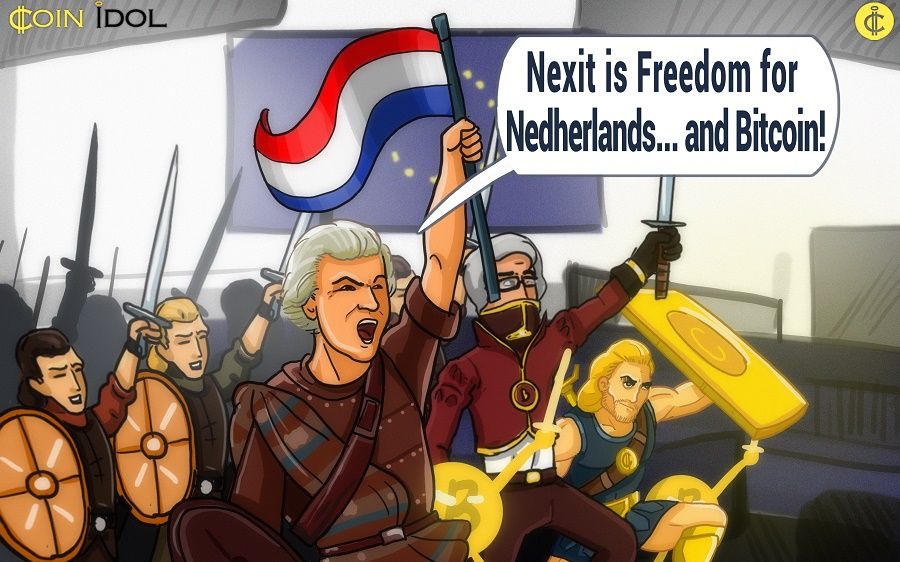 Netherlands exit from the European Union – Nexit – may start another wave of Bitcoin price growth, same as Brexit did in June 2016.

Soon after the announcement of Brexit results, some other countries like France, Italy and Netherlands, expressed their interest in holding similar UK-style referendums.

On August 19, Geert Wilders, the Head of the Freedom party in Netherlands, confirmed its plans to hold a referendum in the country. Previously he has stated that a Nexit referendum is one of the issues in the Dutch general election campaign next March.

The UK Brexit referendum in June 2016 was the time the BTC price rose most rapidly. But Brexit results also enhanced the new wave of financial crisis in the world. Any other referendum to exit EU might have the same or an even bigger influence on the risky asset’s price, same as on other cryptocurrencies.

“The markets are forecasting more uncertainty ahead and Bitcoin and Gold are the winners in these turbulent times. We expect further turbulence as the United Kingdom explores its separation as well as further exits from the EU," commented Simon Dixon, CEO of BnkToTheFuture.com and Fund Manager at Bitcoin Capital to CoinIdol.com soon after the publication of Brexit results.

However, to date, to make a Dutch referendum possible, Netherland’s Freedom party must win the elections first. Mark Rutte, the prime minister of Netherlands stands against the referendum.

Bas Wisselink, co-founder at NXT Foundation commented to CoinIdol.com that Nexit is hardly possible at the moment:

"Nexit is hardly possible under Dutch law. We have no binding referendum, and issuing one would need a majority in two chambers which is very, very unlikely. Wilders has a large group behind him, but far from a majority.
The situation in Britain is hardly comparable with the Netherlands anyway. We have a completely different political setup."

George Gor, former Editor-in-Chief of CoinTelegraph and CEO of world news outlet CoinIdol.com, who has 20 years of experience in brand development and reputation management commented:

"Bitcoin is a very influenced money. Any public announcement can change the price of Bitcoin, because most of those, who own Bitcoin, are traders, and they are waiting for the chance to buy or sell. Bitcoin is not a usual means of payment, that is used to buy bread or water for everyday use. It's more a means of earning for a great amount of people. That's why an event such as Nexit can change the BTC price greatly, if the announcement of the Dutch Party for Freedom (Partij voor de Vrijheid) initiative will be continued by next steps. Every step will be a gunshot, where the target is the Bitcoin price. It will grow."

Tags
Bitcoin price Bitcoin Brexit Price Netherlands June Coinidol EU
Most Popular
May 16, 2021 at 11:30
News
3 Reasons Why Payment Service Platforms Switch to Blockchain, Facilitating the Adoption of the Tech
May 16, 2021 at 10:35
News
Chainlink Rally Stalls at High of $52 as Altcoin Retraces for More Upside Momentum
May 16, 2021 at 09:29
News
Uniswap Range-bound Between $36 and $44, Attempts to Breach Recent High
May 15, 2021 at 12:40
News
Low Orbit Crypto Cannon LOCC Lottery Draft Occurs Every Hour | Stake Once to Enter All Upcoming Drafts
May 15, 2021 at 11:20
News
Dogecoin Resumes Fresh Uptrend as Buyers Recoup Above $0.40 Support
More