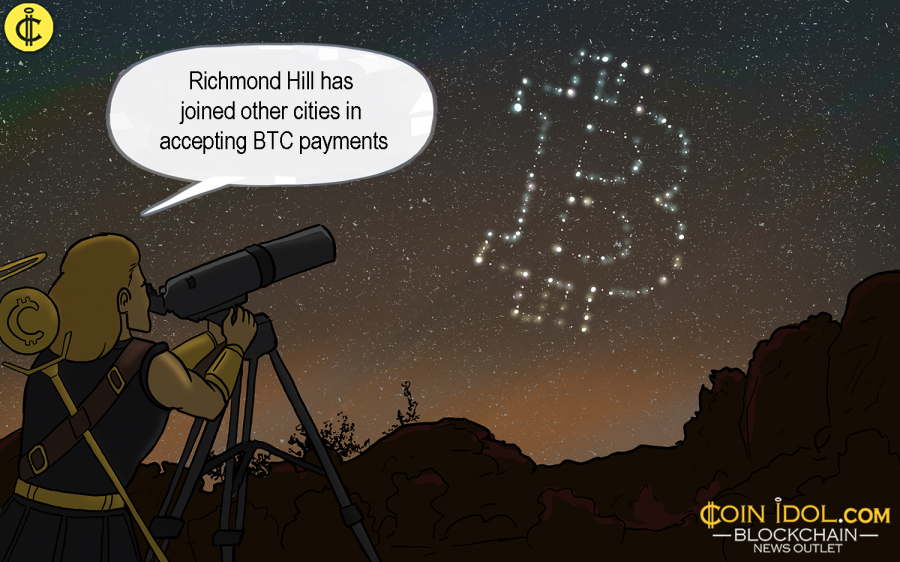 A city with over 200,000 people located in the south-central York Region, Ontario, Canada, Richmond Hill has joined other cities including Innisfil in accepting Bitcoin (BTC) payments from its residents. Now, all residents residing in these cities will be able to pay every kind of property taxes using cryptocurrencies especially Bitcoin, the globe’s top digital asset by market cap.

As we earlier reported, the city’s government passed a resolution giving businesses and populaces of Richmond Hill the new payment alternative and as we talk right now, the process of making the project come to fruition is underway.

The responsible city authorities are working with a giant cryptocurrency platform Coinberry to change residents’ digital asset payments into the traditional currency (Canadian dollars) and also go ahead to collect and take the money to the financial body of the city, according to the Assistant Mayor Joe di Paola. This particular agreed structure means that the city will not face any major cost and risk.

Blockchain is on the Wheel

Of course, Richmond Hill will not be the first major town in Canada or the world at large to accept payments in the form of cryptocurrencies, in May, the Town of Innisfil also declared its intentions of allowing its more than 40,000 residents to use Bitcoin when settling property taxes.

At the time of announcement over two residents used it successfully to pay the taxes while following the required procedures. We also have many other States in the US that are accepting Bitcoin as an alternative means of tax payment, the good example is Ohio (Buckeye State), it started offering this innovative service last year and its residents are seeing the advantages of using this alternative.  Other States including California, Wyoming, Utah, Berkeley City, Maryland, Colorado, etc., are all exploring the potential of blockchain, the underlying technology behind cryptocurrency.

Going forward with such initiatives, this method of tax payments will also become very popular. What the Richmond Hill City now needs, is to make enough advertisements for the businesses and residents to know that this option exists and is allowed by the city authorities. No doubt, the system contains low risks and no costs are incurred. The system also saves time for both residents paying taxes and authorities collecting taxes.