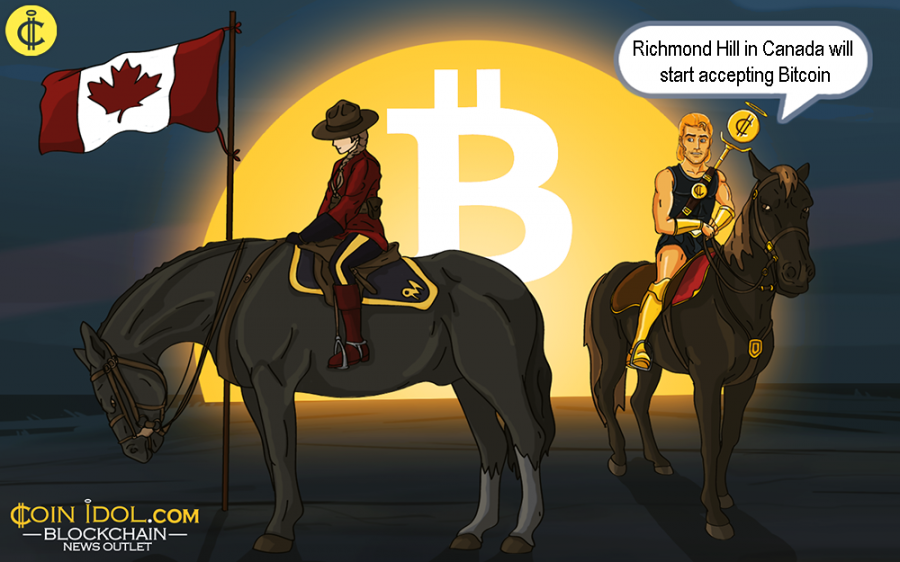 The City of Richmond Hill in Canada, will start accepting the world’s leading virtual currency by market capitalization Bitcoin as a means of payment for property taxes from inhabitants and businesses, The Block reports.

The authority has officially rolled out this program in company with Coinberry, a giant digital asset trading and payment frontier. When the deal is successively sealed, over 250k residents will be in a position to see Bitcoin (BTC) as a payment alternative on the city’s official website.

Currently, the City of Richmond Hill has appeared in records as the second city in Canada to legally accept digital asset for tax payments. The first to do that was Innisfil in Ontario. Innisfil declared its move of allowing cryptocurrency back in March this year.

Coinberry is in serious negotiations with the responsible officials from the City of Richmond Hill authority, on matters concerning offering effective cryptocurrency payment processing solution, beginning with city residents as well as businesses to settle their property taxes with virtual currencies such as Bitcoin, Ether, Ripple and other accepted altcoins.

Last week, the city council conducted a poll on whether to accept (or disallow) tax payments using Bitcoin or other forms of cryptocurrency. The majority voters decided that cryptocurrency should be supported to thrive by letting it to be used in tax-related operations, hence, giving the council a go-ahead to partner with a recognized bull trading system operator.

The Assistant Mayor Joe Di Paola is optimistic about the effort to enable virtual currency to be used by the local inhabitants and businesses in paying property taxes, claiming that it will even increase the demand for virtual asset payment alternative in the near future, most particularly among millennials.

We have seen other similar decisions being taken by different states in the US. The recent one is that of Ohio (Buckeye State) – the state announced last year that it was more than ready to accept BTC for paying tax bills. As we talk now, the Ohio residents are busy enjoying this smooth digital payment service.