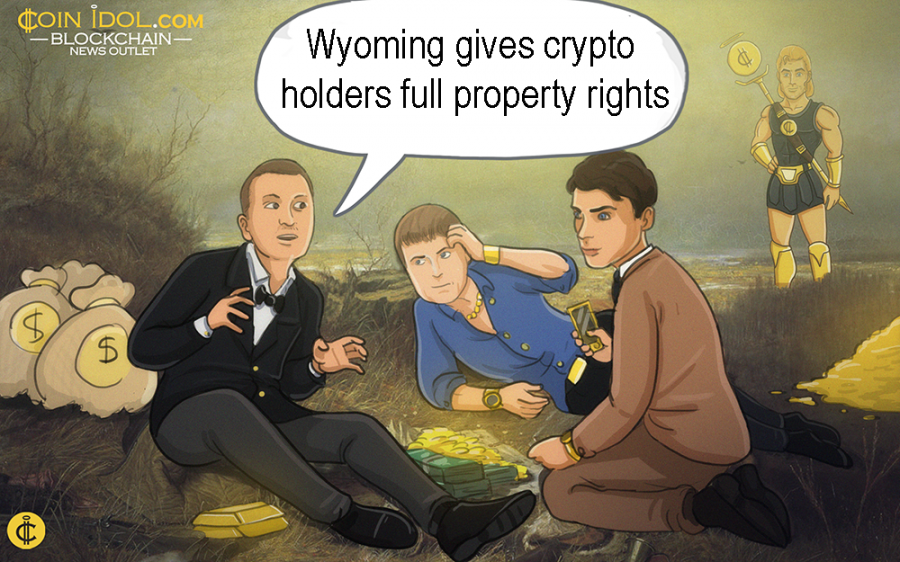 Wyoming (WY) is now the first U.S. state to give authority and direct property rights to all digital currency owners by passing second & third Senate appraisals of Bill SF0125. After that, the bill will head to WY Governor Mark Gordon and its thought it could turn into law very soon – probably next week.

The legislation enables all crypto advocates who are residents of Wyoming to hold cryptoassets such as Bitcoin, Ethereum, Ripple and others, with legal protection by acknowledging and recognizing them through legal rights. Bill SF0125 was legally passed by the Senate.

Also, in mid-January, WY lawmakers tabled a bill which would assist corporations to give certificate cryptos rather than stock certificates with the help of blockchain, as Coinidol reported.

House Bill 0185 “Corporate Stock-Certificate Tokens” suggested a rectification to enable the issuance of tokenized stock-certificate instead of paper-based certificates.

Ex-Wall Street veteran who also serves as a member of the Wyoming Blockchain Coalition, Caitlin Long, shared the news and her sentiment via Twitter: 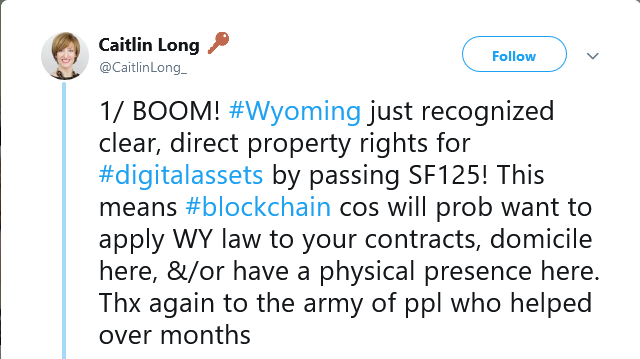 Institutional Investors are Safer in WY than NY

Wyoming - a state in the western U.S; mountainous in the west & north with the Great Plains in the east, has now become the first state in the U.S. to do this, and its anticipated that the effort could yield increasing interest from several businesses, institutions and clients as Caitlin revealed:

“This means DLT firms will (probably) want to apply Wyoming law to your contracts, domicile here, (and/or) have a physical presence here.”

State legislators in the U.S have authority over property rights implying that there are diverse jurisdictions in various sectors across the country. This makes it discouraging and difficult for digital currency business to embark, especially when other considerations such as – the securities laws & antagonistic pursuant of its violations, are combined.

“Have fun watching the transfer of capital away from NY (and) into WY in the coming years, (especially) as securities are increasingly issued on blockchains,” Long said.

The transfer has already started as “We’re moving to WY next to Colorado in the U.S,” said Cardano creator, Charles Hoskinson.