Why CCN Is Dead and Cost Zero and Coindesk Is an Immortal Billionaire? 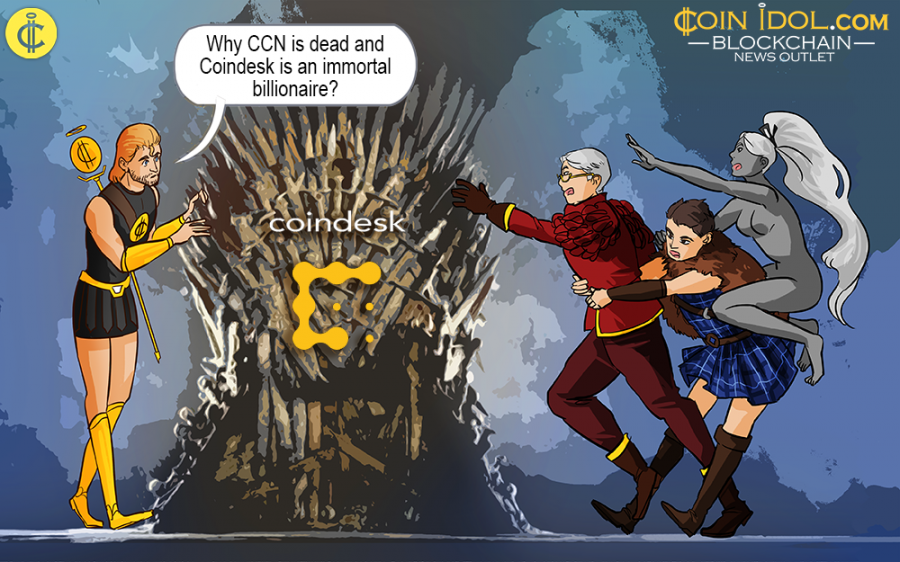 CCN is another project on the cryptocurrency market that is dead because of the wrong business model. That's the opinion of co-creator of the business model for CoinTelegraph and the founder of Coinidol, George Gor. In an interview he explains what they did wrong.

There are only a few media market professionals who manage to work directly with Vitalik Buterin, the founder of Ethereum, Charlie Lee, the founder of Litecoin, and other leaders of the world crypto community for more than 5 years. One of them is George Gor, who is known for having participated in the creation of the CoinTelegraph business model since its foundation and has created a team spanning 20 countries of the world. Since 2016, the core of this team works on the project "Coinidol". This is a short review of how to survive in the cryptocurrency related media market and not repeat the fate of the bankrupt CCN (CryptoCurrencyNews) but rather compete with giants like CoinDesk. 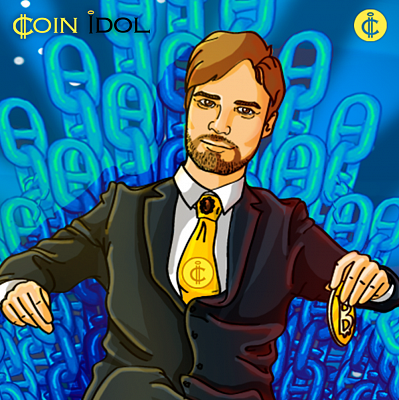 What are the reasons for the bankruptcy of CCN and a dozen other crypto medias?

In 2018, the cryptocurrency market lost 80% of its volume. While before that Bitcoin managed to rise in value to a level of $20,000 USD, it then collapsed, first to the level of $8,000, then to $5,000, and then it dropped even lower to $3,000 for 1 coin. Mining has become less profitable. Amateur investors have left the market, leaving scammers without new victims. At that time scammers flooded the ICO market by almost 80%.

Only lone professionals and institutional investors remained in the market. These are people who can’t be dragged into scam projects that easily. ICOs were replaced by new tools for attracting crypto finance — first Security Token Offerings (STO), followed by the Initial Exchange Offerings (IEO). Following the exodus of scammers from the market, amateur magazines and blogs began to leave the media market as well.

Such blogs sent out offers to sell their websites to the email addresses of all the leading market players. The team of Coinidol received these kind of emails as well. And we analyzed their business models with interest, trying to work out the expediency of investing in various crypto media in German, Spanish and even Chinese markets. But we found no benefits to investing even a thousand USD in the purchase of their domain names or any team member.

During the audit, it turned out that the projects had no readership, and no concept. Their only source of income were the scammers who scattered money to the right and left, since even a single naive and deceived investor, obtained as a result of advertising in such a one-day media, can pay back all the expenses of scammer-advertisers and create a profit from thin air for such unfortunate media. In such a market there was no need to create a business model and maintain the profitability of the media. No need to consider the difference between debit and credit when having such super profits.

It all ended overnight. And many of the most hyper-profitable media projects began to consume their savings from profits gained long ago to support a staff of too many people and operating activities that did not bring new profits, but only absorbed old revenues.

Who are the leaders of the cryptocurrency media market that will always stay afloat? And why?

Only Coindesk. Why does CoinDesk stay afloat in this situation and come out on top in a crisis situation, ahead of temporary upstarts? CoinDesk is not just a market veteran, but a project with serious institutional investors who see the crypto market as one of the stones for building the future of financial technology. They are not interested in the average readers. The CoinDesk editorial team is not interested in clickbait headlines. They get first-hand information from market leaders, ignoring the small and medium segment. They place such trifles as 100% advertising only in the "press releases" section,. They are all 100% official. This is the only crypto player project that has a partnership with non-crypto segment advertisers. Only this media outlet is read by representatives of the banking blockchain of the R3 association. Why? Because CoinDesk is a bridge between two worlds: the world of politicians, bankers, and institutional investors on the one hand, and the world of crypto geeks, crypto amateurs, and single traders on the other. Only CoinDesk speaks a language understandable to both sides, giving dry facts and clear arguments without water, conjecture from internet trolls or the opinions of unknown third-rate third-party companies. 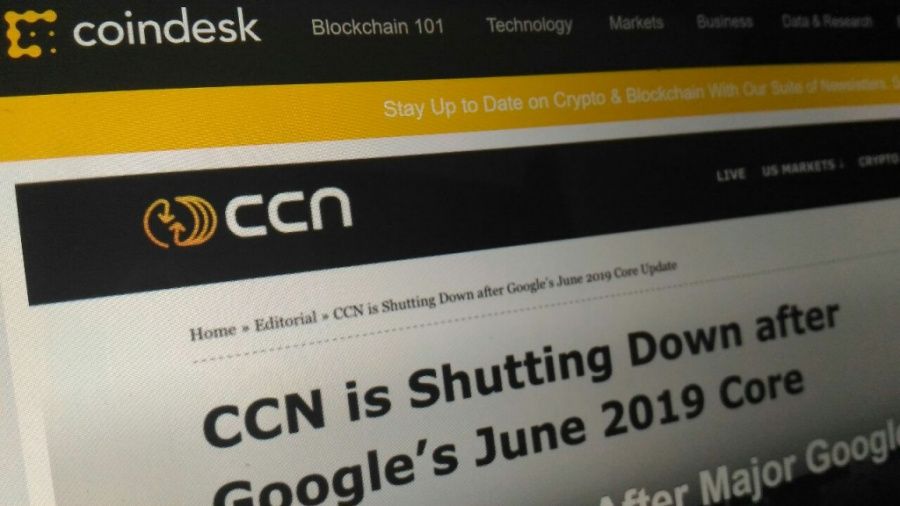 What did other less successful media outlets do, the hundreds of which closed like CCN?

The answer is simple: nothing. They simply reprinted information from CoinDesk and from each other, in parallel, inflating the expenditure for the maintenance of a team that grows without a reason. And this did not bring benefits to projects in the form of profit, but only increased the visibility of their presence in the market. A huge amount of money was invested in the purchase of links on the top keywords, which increased the texts ranking in Google even when they actually had zero informational value and were just clickbait.

You would ask me: and what about you? Do you claim that you run Coinidol better? Can you compare Coinidol with half a million readers to CoinDesk with 8 millions readers? The answer is: no and yes.

I will explain. The concept of Coinidol is that we cover the most important events on the world market by receiving information from world press services and large local publications, which gives us the opportunity to highlight the most important news and squeeze out the most important ideas in our texts every day. And as a result, every news item ends up on news.google.com and the other news aggregators of the world. We support, as partners, and cover major world conferences and events in the field of cryptocurrency and blockchain. We have agreements for mutual promotion with other world news magazines to share our traffic. We are not trying to beat CoinDesk on their field. Our business model is built in such a way that we are working with small forces for an audience of the small to medium-sized crypto market participants. Although we still receive exclusive comments from Vitalik Buterin, the founder of Etherium, Charlie Lee, the founder of Litecoin, and the leaders of Bitcoin Foundation. But we rarely ask them about anything.

The main character, the hero of the concept of our website, is drawn on each picture following the news on coinidol.com. He is looking for a fair monetary system and an ideal token, that is why he is called Coin Idol. Therefore, we try to highlight the news of cryptocurrencies with the top positions according to their market volume, and we welcome advertisers who are launching new coins and tokens on the market.

Creating a large staff of highly qualified correspondents, like CoinDesk, so that they can dig deep for months and take direct comments from Christine Lagarde and Donald Trump's press service, is expensive and does not pay off for us. Since our media is not part of a diversified holding company that aims to pay back investments through indirect profits from third-party projects that are simultaneously promoted through the same media. We are only a small, like the once famous Sparta, decentralized team of strong professionals in their field, scattered across ten countries around the world. We delegate everything that can be delegated. We do not inflate the numbers of the team. Therefore, all these years, despite all the rises and falls of the market, we remain afloat and in the black.

We clearly separate editorial and promotional material. Each piece of advertising material on the site is necessarily marked with a "disclaimer" so that the reader knows that this is paid text and this information must be observed mindfully and repeatedly checked before you trust it. Honest advertisers are quite happy with this approach, as they are confident in their arguments and facts. And they just need a good stage to get them across. And Coinidol is such a stage, gathering up to 1/2 million readers per month.

If suddenly we find out that our advertiser is a scam, we send the funds received from him to charity. If we do not have exact facts but our readers are suspicious that the advertised project might be unfair, then we add the “nota bene” beneath the "disclaimer" and we provide a link to the source of warning information about the project that the reader should know about. That is how we screen out scammers and gain partners for the years.

Since the founding of the project in June 2016, we have found partnerships with all the leading advertising agencies in the world that work with the cryptoсurrency market. And they trust in the quality of our work.

We will continue to follow this narrow path along with our hero Coin Idol, who will definitely find his "Ideal Coin".

And we are happy to expand our team with those who can bring benefits to the project and at the same time we dismiss those who spend the funds raised for nothing.

Tags
CoinDesk Business Market Coinidol Cryptocurrency Interview Media News Information
Most Popular
May 13, 2021 at 15:37
News
Binance Coin Drops to Previous Range-Bound Zone, Unable to Sustain Above $700 High
May 13, 2021 at 14:57
News
Bitcoin Plunges below $50K Support Level as Bears Threaten to Short to $44K Low
May 13, 2021 at 14:03
News
The e-Commerce market is Vulnerable to Fraud and Merchants Are Unprepared to Prevent it
May 13, 2021 at 11:05
News
Giant Telecom Companies Turn to Blockchain to Speed up Technological Progress
May 12, 2021 at 15:03
News
Cardano Consolidates Below Recent High as Bulls Attempt to Breach $1.80 Resistance
More