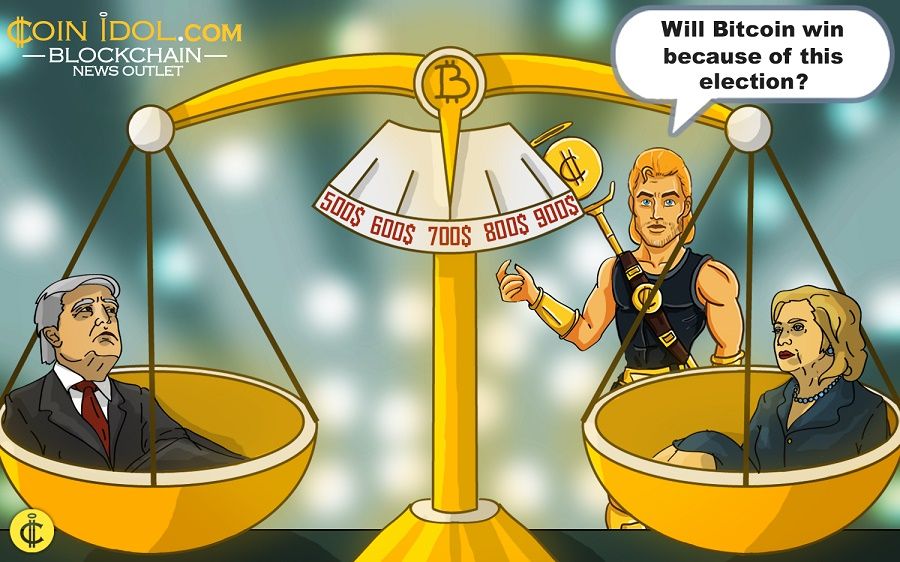 Donald Trump becomes the president-elect of the United States and the Bitcoin price reacts immediately. CoinIdol.com conducted a survey and asked Bitcoin and Blockchain experts about possible price changes.

While most politicians suggested victory would go to the Democratic candidate, Hillary Clinton, the results of the election on November 8 turned to favor the Republican candidate – Donald Trump to become the next president of the US. Experts forecast that the chance of a Clinton win was 71.4%  vs 28.6% for Trump.

For Bitcoin users, these elections were not just a question of politics and social life but also a choice between ‘no’ (in the case of Clinton winning the election) for the strengthening of the cryptocurrency’s position or ‘yes’ (if Trump wins).

The results of the election led to strong volatility on world markets. All European and Asian major indices decreased by about 2%.

In the meantime, the price of Bitcoin rose by 4% and reached $740. Note, just a day before the election, Bitcoin’s price was fluctuating between $704 and $712 per BTC.

Bitcoin and Blockchain experts had their own predictions about the possible short-term future of the Bitcoin price.

Christian Saucier, CTO of Ubitquity commented to CoinIdol.com a day before the election:

“I don't expect the election to have any meaningful impact on the price of BTC. However, the campaign itself as well as the very polarized political climate within the Unites States makes me BTC bullish over the next 6-12 months.  The political and economic outlook for 2017 is clouded in uncertainty.  I believe more wealth will flow into BTC as a store of value in the coming months.”

“It is possible that the new president will be in a position to apply new regulations to cryptocurrencies in the United States. So far there seems to be a consensus that Blockchain is a good thing for finance and that Bitcoin can not be stopped.
The new president in the States will definitely be addressing matters related to cryptos and the landscape in the US will be shaped by it. I think that this will not disrupt global innovation in Blockchain technology and that the price of Bitcoin will remain relatively stable and the currency will continue to be useful for trading around the globe.”

“As for what the election will do to the stock market, I explain that right here about 6 days ago, I also called the bounce in prices leading into the election day which was a perfect call.”

“China has been painted as having more reason to get in new money, or hype news. Commonly people will say capital constraints (moving money out of the country), hedging currency volatility. I think what one would be looking for is pain on the markets in the United States to drive some "logical" new interest.”

Donald Trump’s presidency is considered to lead to certain consequences for the US economy because of his promises to reduce corporate taxes and to support the restrictions of capital controls.