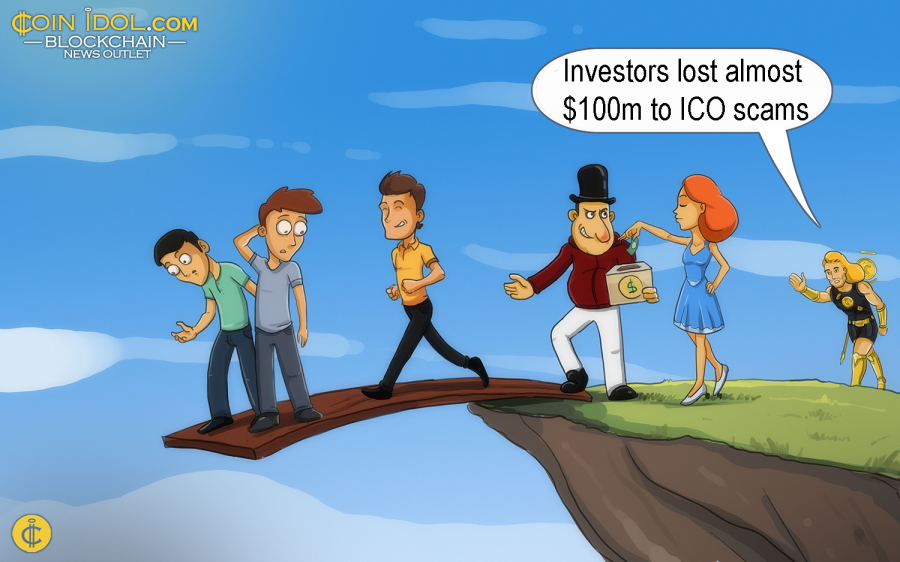 Recently, several Initial Coin Offerings (ICOs) have excited the investors to a larger extent and there is no denying that some of these cryptocurrency-based fundraisers have also hurt the majority of them.

Currently, it is appraised that investors have lost almost $100 million to ICO exit scams as first reported by Diar, a Blockchain intelligence company on Monday, August 13 this year.

Cryptocurrencies Go Down the Drain

The Chinese regulators have since forbidden all ICOs and Cryptos, nevertheless, some rogue ICO organizers have planned a witty means of bypassing the embargo.

According to the report by Diar, the most weighty ICO exit scam still has been arranged by China-based Shenzhen Puyin Blockchain Group.

The fraudulent distribution ledger technology startup supposedly generated a large $60 million from its 3 ICOs which include ACChain, BioLifeChain and Putin.

Diar further noted the case of NVO ICO that highly claimed that it was developing a decentralised crypto exchange and secure wallet. However, there are reports stating "this project is no longer generating enough sales volume and has been from lots of exchanges and https://coinmarketcap.com/." There is also a conflict between the cofounders.

There are now over 1,600 Cryptos on the market. However, over 1,000 cryptocurrency-assets are "dead projects," without strong plans for the time ahead of us and their prices are influenced largely by speculation.

If digital assets remain estimable and valuable and go on to gain much adoption, ICO exit scams plus other cryptocurrency-linked frauds are likely not to come to an end.

Even though the governments are formulating proper guidelines for ICO projects to follow, in a bid to control the activities of fraudsters, investors also require to ascertain the situation properly in cryptocurrency-based investment schemes.

There is Still Hope

Most scam ICOs are depicted by red flags like plagiarized, error-ridden white papers, they promise investors fat returns within a very short period of time, lack an active GitHub repository and other signs.

Even with the recent Bitcoin price decline and the altcoin market downward trend, there is quite a small number of projects that began as ICOs and have stayed standing healthily since the time of their launch.

The Ethereum crowdsale, an online event where participants can purchase tokens in a cryptocurrency, was arranged between July and August 2014, and from that time the project has been unsuccessful.

Of recent, Finance, the global's giant Crypto exchange was made through an ICO last year and quick forward to this year.