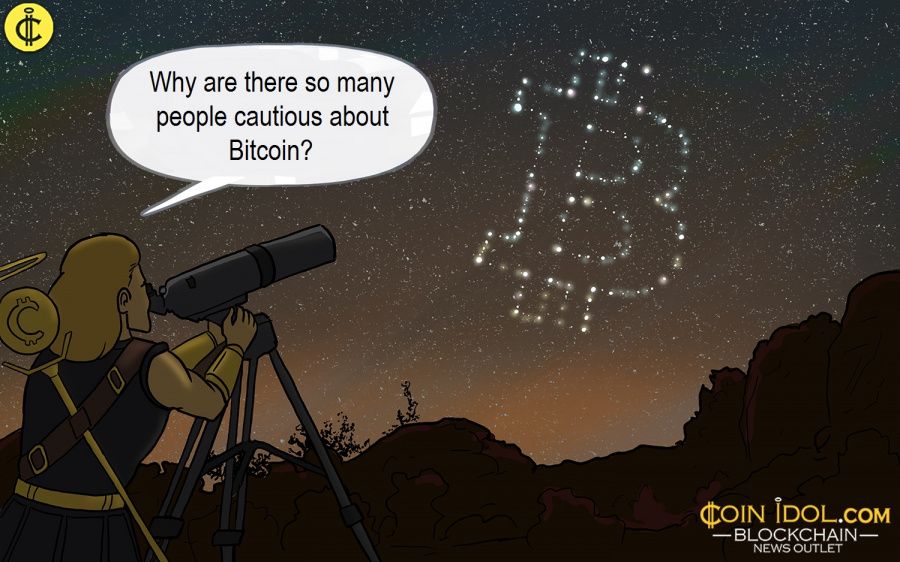 Despite the interest in bitcoin as well as other cryptocurrencies has grown rapidly, there are still lots of people that are cautious about it. While faithful adepts of the crypto industry argue that cautiousness is caused by the lack of awareness, there might also be other reasons for the lack of trust.

The reality is such that people tend to be cautious about everything that is new as it takes time for any innovation to prove its reliability and usefulness. Bitcoin is not an exception. When it was launched back in 2009, only tech nerds paid attention to this new currency. After most of them became billionaires, common folk also showed interest in it. As we see, during 10 years of existence, bitcoin has gained some trust from the wide public, though some users are still hesitant to adopt it. Why? Let’s try to figure out.

Are you afraid of bitcoin?

Lack of awareness and understanding is indeed a widespread reason for avoiding bitcoin along with other digital currencies. People tend to fear everything they can understand. Ever since the stone age, people were afraid of phenomena they couldn’t explain, worshipping them as Gods. As time passed by, humanity learned the principles of them, and the fear subsided. Surely, people have got much smarter since the stone age, so you would hardly find a person worshipping any new technology. Nevertheless, the perception of all new and unknown has changed a little, with fear being substituted with cautiousness.

It is basically the same with all innovations. As soon as people learn how they work and see they can make their lives better, fear is substituted with adoption. If we talk about bitcoin, the problem here is that a person without technical education would find it difficult to understand how it works. It is based on immutable algorithms and laws of mathematics, but not all people are mathematicians. For someone who uses a calculator for all operations more difficult than adding two and two, the mechanism of Bitcoin is something more like science fiction.

However, as time goes on, and the world turns increasingly digital, education on digital technologies becomes a must, so there will be more and more people able to understand the benefits bitcoin offers. Therefore, the level of trust in bitcoin will increase along with people’s awareness. 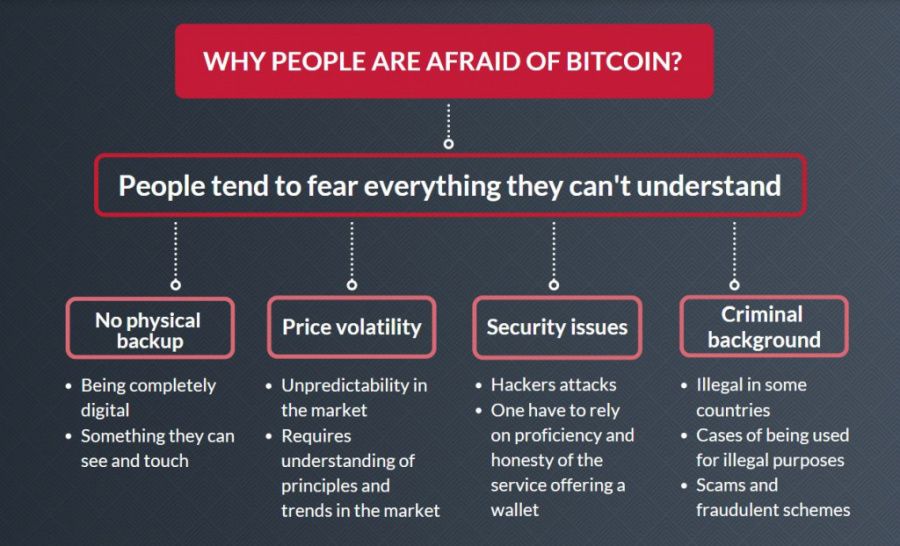 Another thing that might cause fear for bitcoin is the fact that it is not backed by any physical value, being completely digital. People tend to rely on something tangible, something they can see and touch. While all other currencies are backed by gold and are presented in the form of coins and banknotes, bitcoin can not be seen and touched, and its value is based purely on mathematics.

For this reason, many people still think bitcoin is nothing but a bubble with its value artificially pumped and dumped. Overall cautiousness was intensified by criticism from some prominent figures from finance and banking. For instance, Warren Buffet used to say bitcoin is nothing but gambling, as coinidol.com, a world blockchain news outlet, reported.

PayPal founder Bill Harris also criticised bitcoin and even called it a scam. However, rumours have it now that the payment giant is going to offer its users direct buys and sells of cryptocurrency. If the initiative will be launched successfully, it might shift the trend to bitcoin adoption. When giants from the traditional world accept bitcoin, the general public believes them. Besides, if bitcoin or any other crypto is adopted by PayPal, it might mean that the market realizes its value despite it not backed by anything tangible.

This is probably the most obvious reason Bitcoin trading was called gambling in the first place. Despite its price mostly relying on news, there is always an element of unpredictability in the market. When its price reached the record level of $20,000 in late 2017, no one expected it would collapse shortly after. Despite price correction being anticipated, there was hardly someone who would think about such a dramatic fall.

Earlier this year, bitcoin made another significant fall, when its price collapsed to $3,800 during the event called “Black Thursday”. Back then, the majority speculated that the bearish trend would be lasting due to coronavirus. However, it surprised people again when having moved to over $6,000 in something about 24 hours.

Generally, such price volatility offers traders an opportunity to earn some profit. But in order not to turn trading into gambling, a person must understand some major principles and trends in the market. Despite the element of unpredictability that is present in bitcoin, there is always room for analysis.

Alas, despite high price volatility might seem a benefit to traders, common folks are mostly scared off by it. If you do not plan on trading Bitcoin, short-term storing of value might be very risky. And this is not a feature people would trust in any currency.

There are many kinds of cryptocurrency wallets, each offering its own set of advantages. However, there is always one issue that concerns ordinary folks, making them hesitant about dealing with bitcoin. The issue is security.

When you buy a physical wallet to store physical money, there are little ways to lose your fund if you are careful and cautious enough. In other words, you yourself are responsible for the security of your wallet. In the case with bitcoin, you have to rely on proficiency and honesty of the service offering you a cryptocurrency wallet. As it is a code, this means there might be a flow and a bug, which might cost you all your savings. This is something a user can not control.

Besides, we must also mention hackers that might attack a service and steal all money that is kept on it. There have been many hacks worth thousands or even million of dollars. For instance, during a notorious hack of a New-Zealand cryptocurrency exchange Cryptopia, nearly $18 millions worth in ETH were lost to criminals, making about 9% or their entire supply.

Surely, ordinary bank accounts can also be attacked. Even if you keep your savings at home, no one would guarantee they might not be stolen. However, if we talk about cryptocurrency as a new kind of money, any vulnerability might cost it people’s trust, even if it is the same that fiat money has.

Despite the fact that bitcoin is used for illegal purposes does not influence its general reliability, people get usually scared off by it, for it makes them think the currency itself is something illegal. In fact, it is in some countries. However, in most parts of the world Bitcoin can be used relatively freely, as countries have either friendly or neutral relation to it.

Nevertheless, the fact remains the fact, Bitcoin is actually used for illegal purposes such as money laundering, terrorism financing, drug business, human trafficking etc. owing to its anonymity. Although all transactions recorded on the blockchain can be traced, it is impossible to identify parties of a transaction, unless the service they use complies with AML and KYC policy. A safe haven for criminals, isn’t it?

Besides, there is a huge amount of fraudulent schemes using Bitcoin as well as other cryptocurrencies. For instance, a scam involving fake cryptocurrency giveaway from Elon Musk harvested about $2 million from trustful users. During the past decade, solely Australia lost over $2 billion to various cryptocurrency fraudsters.

Such a background creates a kind of negative sentiment around Bitcoin, which, when combined with other factors, is able to significantly affect the level of trust in it from the general public. Sure, bitcoin is not to blame for purposes people use it with, however, many of us lack time and interest to dig into the matter thoroughly. Simply avoiding is much easier.

A shift is needed

Presently, the globe strongly adheres to physical money with physical value. The system that has been established for hundreds of years can not be broken down in a decade. However, the first half of 2020 has seen a significant surge of interest in digital technologies. As many spheres of human life switch online, people get more familiar with innovations such as cryptocurrency.

If the general trend for digitisation grows further, the level of trust in bitcoin is expected to grow and the influence of the above mentioned factors might weaken. However, the key determinant for wide adoption of bitcoin is still time. If the technology exists long enough while demonstrating reliability and advantages as compared to traditional finance, the trust in it will be built irrespective of any factors.