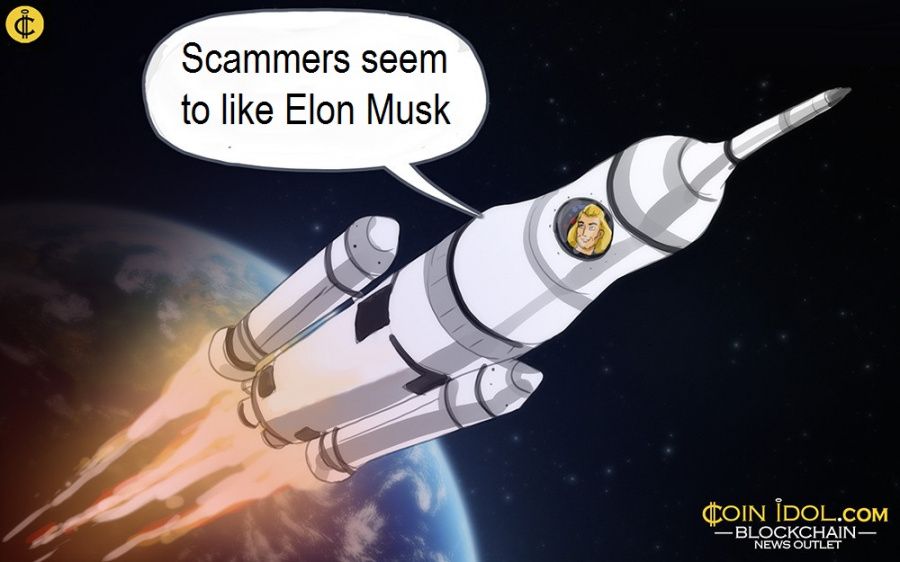 Fraudsters use social media pages of famous people to impersonate them and attract their victims by seeming reliable. Well, Elon Musk seems to be a very popular person among scammers.

To increase trust level to their schemes, fraudsters use sophisticated technologies to create bitcoin wallets using the name of Elon Musk, Tesla, SpaceX. The latest fake giveaway involves at least 66 addresses of the kind, according to Adaptive cybersecurity firm.

Besides a fake giveaway in social media, scammers uploaded a promotional video on Musk’s YouTube channel. To get access to it, hackers allegedly used a Trojan-infected email. In such a way they infect the owner’s computer with malware that allows criminals to get access to their social media. Thus, they are able to upload videos with fake endorsements of scam projects and make them seem absolutely reliable.

Ordinary users tend to follow the lives of celebrities. Therefore, all they advise seems good and reliable to ordinary people, that is why only a few would make an investigation before trusting their money to any project. Unfortunately, that is what scammers expect from people, a blind trust in the choice of celebrities.

However, the latter often have no idea they take part in any investment project or give away free cryptocurrency. Most times they realise their names were exploited only after they detect fake videos on their YouTube channels or see the news in social media. Alas, exposure does not usually stop scammers, making them choose another celebrity over and over again.

For instance, coinidol.com, a world blockchain news outlet, previously reported that scammers even dared to involve the British Royal Family to promote a fake investment project called Bitcoin Evolution. Fraudsters exploited the news about Prince Harry and Meghan Markle’s intentions to become independent from the family and posed themselves as the ones who had helped them to gain their own fortune.

Elon Musk’s name has also popped up in promoting scams and fake giveaways every now and then. Earlier this year, another investment project called Bitcoin Era exploited it along with the names of Bill Gates, an actor Daniel Craig and other famous people from various spheres for advertising.

Back in 2018 Musk’s Twitter page was misused for announcing another fake Bitcoin giveaway. Then, scammers even managed to hack Donald Trump’s Twitter page along with that of Elon Musk. Such a scheme is not new. Fraudsters hack celebrities’ social media pages and announce giveaways of a big amount of money in exchange for paying a small transaction fee. Needless to say that those who pay this fee simply contribute to scammers’ well-being without getting any money in return.

As we may see, the fact that a celebrity promotes a project doesn’t mean it is 100% legit. So those wishing to invest their money or take part in a giveaway should make a thorough investigation before paying or investing anything.

There are many internet resources that gather information about legit and scam projects, such as TrustPilot of ScamWatchers. Such services accumulate customer feedback on various kinds of projects, allowing anyone to see what experience others had with a company.

If we talk about giveaways, there are services such as Bitcoin Abuse, where scam wallet addresses are reported. Here you can check any wallet address you want to send payment to. If it was reported being involved with any illegal activity, the website will show this.

Even if such services do not show anything, there is always a chance to find any comments from social media users that might have taken part in the project before. In our modern society people tend to instantly report online everything that happens with them. So if someone has scammed them, they are very unlikely to keep silent.

Surely, it sometimes takes time, however the time spent on investigation might cost you a significant amount of money you could have otherwise lost to benefit some fraudsters.