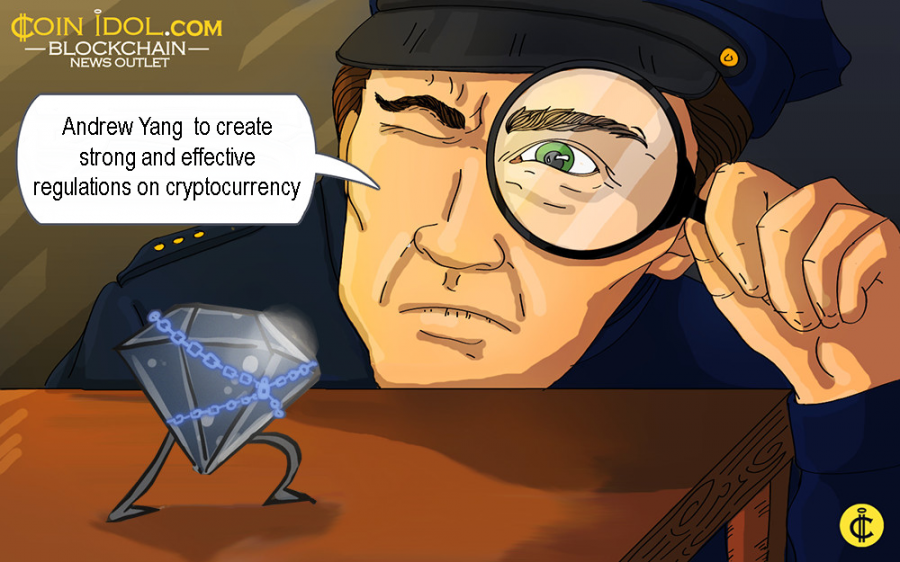 The prominent blockchain and cryptocurrency advocate Andrew Yang, who also wants to participate in the 2020 United States (U.S) presidential election on the Democratic party ticket, could win all votes from the crypto community in the nation. Andrew has now officially declared his plans to create strong and effective regulations on cryptocurrencies such as Bitcoin, Ethereum, Ripple and others, which the country presently lacks.

New Policy #22 - Digital Asset/Cryptocurrency Regulation. Investment in cryptocurrencies and digital assets has far outpaced our regulatory frameworks. Investors need to know what their treatment will be in order to properly innovate in the U.S. https://t.co/PyzRfy1t9a
— Andrew Yang (@AndrewYang) April 18, 2019

Using his official website, Andrew underlines his target of creating a clear guideline in the cryptocurrency world to enable businesses and individuals invest and carry out massive innovations in this sector minus any panic of the regulatory shift. He further said:

“Investment in cryptocurrency and digital assets has far outpaced our regulatory frameworks in the U.S. We should let investors, firms, and individuals know what the landscape and treatment will be moving forward to support innovation and development. The blockchain technology has vast potential.”

The responsible financial authorities such as the U.S Securities and Exchange Commission ( SEC), Commodity Futures Trading Commission (CFTC), etc., have also been taking some steps towards regulating this nascent industry, to level the ground for all the cryptocurrency market participants. They are trying to give regulatory clarity over several tokens and digital assets.

Andrew also labelled New York’s (NY) Bitlicense that vetoed the application by Bittrex as “Onerous.” Small businesses find it difficult to carry out their activities in NY because of the high costs of the Bitlicense, which is one of the reasons why some giant crypto exchanges like Coinbase are not operating in NY.

The presidential candidate revealed his other goals related to cryptocurrency if he is voted as the U.S president. Among other major goals include: bring legislation which will offer strong clarity in crypto market field, for instance by, legally defining a token and stating whether it is a security or not, identifying the federal agencies responsible overseeing, monitoring and regulating digital currencies, look for ways of protecting the customers in the industry, make clear tax implications particularly on holding, selling and trading bitcoin and other major cryptocurrencies, create a national framework on blockchain and crypto; and working with various sponsors of Token Taxonomy Act, Wyoming (WY) legislators to push forward the aforementioned goals, especially demonstrated after their work.

“It’s time for the federal government to create clear guidelines as to how digital currencies markets will be treated and regulated so that investment can proceed with all relevant information,” Yang said.

To show that Yang has a lot of support from the crypto community, the candidate gained fame from the internet and giant social media platforms to the extent that over 65 thousand donors from over 21 states sent him Bitcoin to facilitate his campaign and the different presidential debates he will be attending.

The United States is known to be open and friendly for cryptocurrency and blockchain-related projects. Recently, the state of West Virginia revealed it plans to use blockchain and distributed ledger technology (DLT) in the upcoming 2020 presidential election – the election in which Andrew Yang (Democrat) will be a candidate. Other states such as WY, Utah, Alaska, Connecticut, Colorado, California, Ohio, Washington DC, New Hampshire, and others, are putting their heads high to take advantage of this revolutionary technology.

Tags
Cryptocurrency Presidential candidate Blockchain Bitcoin USA Community Regulation Ethereum
Most Popular
Jan 25, 2022 at 12:24
Price
Litecoin Declines as Price Deepens in the Oversold Region
Jan 25, 2022 at 11:30
Price
Weekly Cryptocurrency Market Analysis: Altcoins in Oversold Regions as Buyers Regroup for a Price Rebound
Jan 25, 2022 at 10:32
Price
Ripple Fluctuates above $0.56 as Bears Threaten to Resume Selling Pressure
Jan 24, 2022 at 12:12
News
30 YouTube Channels Hacked; Is it Another Reason for Bloggers to Switch to Decentralized Streaming Platforms?
Jan 24, 2022 at 11:15
Price
Ethereum is in a Tight Consolidation, May Slide Below $2,300 Low
More