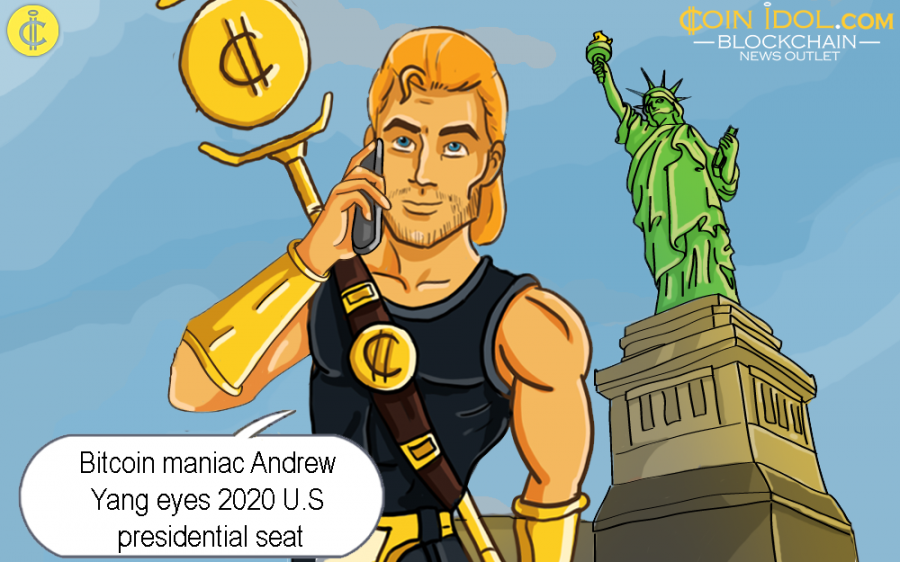 The 2020 U.S presidential candidate, a pro-bitcoin maniac and a founder of Venture for America, Andrew Yang recently made a vital breakthrough, and this has seen his campaign gain momentum. Andrew’s presidential campaign gained massive traction in the first two debates organized by Democratic National Committee.

The Democratic candidate got prominence from internet and social media has attained more than 65,000 donors from more than twenty states, enabling Andrew to qualify and participate in the first U.S presidential debate. After achieving this, Yang tweeted that:

We did it!!!! THANK YOU everyone who supported us to make it happen!!! First stop debates next stop White House!!! pic.twitter.com/i5XXkotffH
— Andrew Yang (@AndrewYangVFA) March 12, 2019

Yang advocates a $1,000 monthly global income if he turns out to be the next U.S president and that particular idea boosted him high after appearing on the Joe Rogan Experience. He also plans to apply a universal basic income of over $12,000 yearly for every adult American aged between 18 to 64.

He was praised by the Obama administration back in 2012, and he was later chosen as a “Champion of Change.” In 2015, he was also selected as a “Presidential Ambassador for Global Entrepreneurship.”

Back in 2013, Yang tweeted about cryptocurrency and started to receive huge donations in digital currencies to facilitate his campaigns, and he then recognized this move as a vital milestone for the digital currency industry. As far as donation is concerned, the crypto-enthusiast allows cryptos such as Bitcoin, Ether, and nearly all ERC20 tokens.

Blockchain to Create a Transparent Society

In 2018, Andrew orated that digital currency has the potential to make a more transparent community. Adding that a smart government would welcome this thing and also work with it, concluding that, he would do that.

During a Facebook AMA I was asked about crypto and blockchain. I think the technology has massive potential to create a more transparent society. A smart government would embrace this and work with it. I would do that. pic.twitter.com/Vn2vYvKDSg
— Andrew Yang (@AndrewYangVFA) July 5, 2018

Several protuberant crypto enthusiasts have come out to give their support using virtual currencies for the approaching presidential elections.

The presidential debates will be limited to only 20 candidates such as Cory Booker, Bernie Sanders, Kamala Harris, Elizabeth Warren and others.

The 44-year-old Andrew of Asian descent perhaps could positively change the American politics. His Bitcoin knowledge starts way back in 2013 after tweeting on the crypto collapse especially when Bitcoin plunged below $600 USD:

Several U.S. states such as Wyoming, California, Utah, Ohio and others,  have shown positive interest on the use of blockchain technology and cryptocurrency.

So, since the U.S.A is open for digital currency and financial technology, any presidential candidate who is friendly to such technologies will automatically gain massive support from the public (voters) especially those who are also in support of these developments.