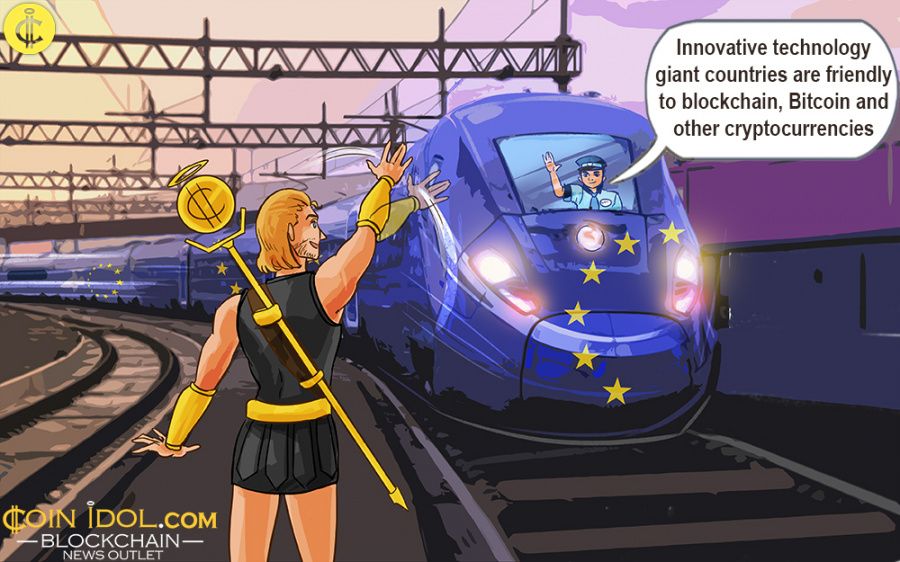 Innovative technology giant countries such as Malta, Italy, Switzerland, Denmark, and Estonia, are in the top 5 European nations which are friendly to blockchain, Bitcoin and other cryptocurrencies, and have acknowledged the importance of creating a cryptocurrency focused economy. Nevertheless, forming, registering and operating a cryptocurrency firm, how much good the ground is levelled, the crypto businesses in the continent still experience serious problems.

Currently, there are over 375 cryptocurrency companies with more than 420 founders in the European Union (EU), dealing in different areas including financial services, payments and software. Examples of the companies include Binance Labs located in Valletta, Malta; FinLab based in Frankfurt, Germany; Ledger located in Paris, France; Bitstamp and Cashaa, which are based in London, U.K; and others.

Below are the Top 10 European countries favourable for setting up a blockchain-related business, according to the findings by BlockShow Europe 2018.  The study considered 48 countries and dependencies in Europe.

Recently, the tax authorities in  Italy came out to revise some important articles concerning tax obligations as well as AML, within the crypto regulatory framework, and provided some promising signs to the industry. The authorities want to level the ground such that they can attract more and more crypto businesses in the country.

Italy is also carrying out mass sensitization about the benefits of blockchain and cryptoassets. Even, according to the recent  survey, it shows that the majority of Italians have knowledge about blockchain, Bitcoin and smart contracts. If the country maintains this pace, it will even become a  leader of crypto and distributed ledger technology in Europe, especially after Brexit. Last month, Italy joined Malta on blockchain tech and cryptoasset regulation, as the two legal experts (Egitto and Busuttil) revealed.

In a study conducted by BlockShow Europe 2018, a blockchain conference, Denmark was among the top 10 cryptocurrency-friendly EU countries and the country has the best environment for beginning a blockchain-related business.

In January this year, Skattestyrelsen, the Danish Tax Agency, started collecting data and every important info about digital currency exchanges and traders, to make sure that users are paying the correct tax amounts. At the time, the director of Skattestyrelsen in charge of personal income tax collection, Karin Bergen, noted:

“With the permission of the Skatterådet, we will for the first time gain access to the trades made through Danish exchanges. This gives us new opportunities with respect to exercising control in the sector.”

Malta: A Crypto and Blockchain Hub

The financial watchdogs in Malta, a blockchain island, finished approving 14 entities which will be the first Virtual Financial Asset (VFA) agents in the entire nation – to work as intermediaries between digital currencies firms and the Malta Financial Services Authority (MFSA) which drafted the approvals.

The agents will further offer guidance and assistance especially with legal and accounting issues to entrepreneurs in the best interests of the regulator including token issuers and service providers under the VFA Act. All approved agents will be evaluating business plans and carrying out due diligence especially under anti-money laundering (AML) regulations.

Estonia also provides the best climate for cryptocurrency trading platforms such as Binance, Coinbase, Localbitcoins and others. It charges low initial capital, and its licensing process is very quick, and the taxation policy is favorable.

Towards the end of last year, the finance ministry of Estonia made arrangements for amending the financial bill in order to reinforce the cryptoasset sector by adding new effective amendments to the regulations.

Also, many companies, financial institutions and organisations in Switzerland have been seen adopting and using Bitcoin. For instance, in 2017, the Swiss giant in online banking Swissquote declared the rollout of a Bitcoin trading service. The online banking service provider bull partnered with Bitstamp crypto exchange to provide Bitcoin trading with fiat currencies especially USD and EUR.