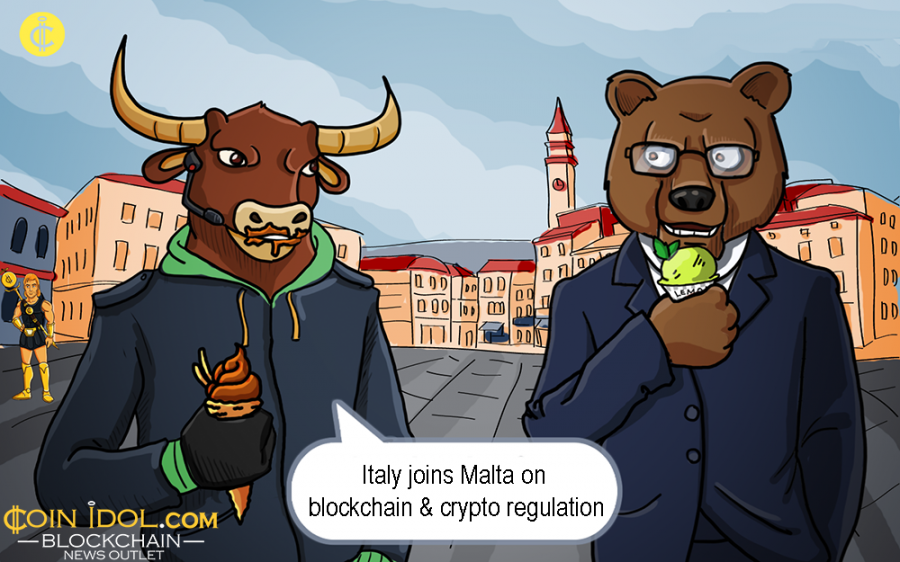 The two legal experts (L. Egitto and G. Busuttil) were recently interviewed to give light on where Italy stands on the regulation of blockchain, cryptocurrency, smart contract and other innovative technologies. Several institutions, firms, organizations, businesses and governments have been moving forward for few years especially in Europe, such as Switzerland with its Crypto Valley project (of the canton of Zug) and Republic of Malta started before any other country.

Malta has for long been undisputed and acknowledged leader of both blockchain and crypto industry in Southern Europe for ages and its move to join EU has reinforced its status as a blockchain hub. Back in July 2018, legislators approved three draft laws hence building the foundation for proper legal framework for innovations.

From that time, Valletta, the capital of Malta, has become the focal point for all firms and investors who are interested in opening up blockchain and crypto-related projects. Italy realized it later and started working on how to also improve this nascent industry. It came up with the Simplification Decree which contains many things including technology, smart contract, cryptocurrency and others.

While in an interview Luca Egitto, R&P law firm, said that the Simplification Decree became a law which introduces the definition of innovative technologies into the legal system and in case certain requirements are met, then they will be equivalent with the traditionally written contracts.

Also, is equivalent to the time stamp given by the EIDAS Regulation on electronic which has been working since the year 2014 on distributed ledger technologies which meet all the requisites to be identified by the AgID.

It would be reckless to claim that this perimeter also includes tokens, even if this is a first significant step to get the Italian legal system to speak with the community.

Several assumed use cases are based on improper assumptions or suggest the use of the technology in sectors that can work very well sans, almost as if it were a "cool" database. The big deficiency which exist is the lack of awareness on how the creation of a blockchain permissioned with possibly a few nodes strongly hierarchized is a illogicality regarding the chief advantages of the technology around which has been created interest.

Disintermediation is a vital concept and continue to dream projects in which the self-styled blockchain is nothing more than a database centrally controlled by a "certifier" does not lead to anything predominantly valuable.

The meeting "Use the blockchain in Malta: innovation through regulation" happened in Milan on Monday March 4, 2019 and in Turin on March 5. The two days aimed at examining the opportunities of the Maltese structure and the changes in Italian legislation. During the event the physiognomies of these rules, their application and the benefits they provide concerning the current Italian system were deeply examined.

Malta has become the first country in the world to create an ad hoc regulatory framework for the distributed ledger technology through the establishment of three laws that regulate digital assets and smart contract.

Gianluca Busuttil, from David Zahra and Associates Advocates law firm, also revealed that the recent increase in adoption of blockchain was linked to anti-establishment symbol that is Bitcoin.

“The application of technology on a large scale requires that we go beyond the original ideology and assign priority to utility, implementing Blockchain where it is the most suitable solution.”

The Maltese law focuses on regulating a range of initial coin offerings which issue coins that can be classified as Virtual Financial Assets (VFA), and has formed a class of licenses which will govern the provision of services related to VFAs. None of the foregoing will affect the application of existing legislation, like the MiFID that regulates investment services, or the e-money directive that will go on to oversee coins that qualify as "e-money".