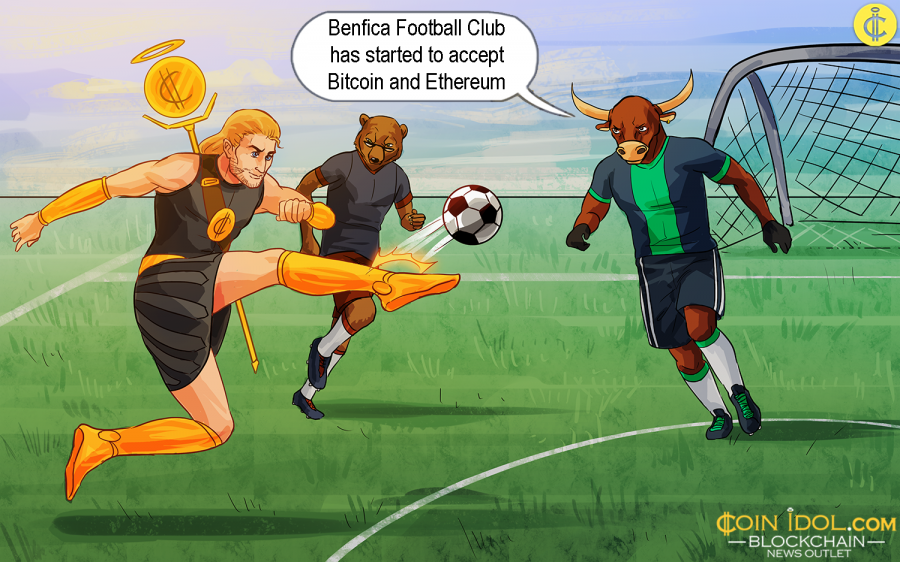 Many sports companies globally are seemingly joining the blockchain and cryptocurrency industry. Now, the European soccer giant Benfica Football Club in Portuguese Primeira Liga, has started to accept Bitcoin and Ethereum. Now, the transactional value of digital currency can be fully used around Benfica’s home playground, Estádio Sport Lisboa e Benfica. Integrating cryptocurrency with sports will bring a massive boost to the blockchain industry, in fact, it has already started to see a positive growth.

On June 5, Benfica FC declared that it now accepts the top two cryptocurrencies by market cap worldwide as means of payments, so the supporters and fans of the club can buy the match tickets, jerseys, and other merchandises using Bitcoin and Ether.

For a while, Benfica has been considering the idea of using digital currencies and the plan has been in the pipeline until recently, when it publicly announced that it’s now ready to accept crypto for regular payments.

Last month, Liverpool FC, an English football club, and winner of the 2018/19 UEFA Champions League, showed interest in using cryptocurrency when it made a partnership with TRON, a thing that was later refuted by both sides through Justin Sun and Liverpool’s spokesperson, as Coinidol reported.

Other major sports companies such as Juventus in Italy, Gibraltar semi-professional team, etc., have entered into this lucrative industry. For instance, Juventus was planning to roll out its own crypto called “ Fan Token” with the aim of establishing better relations with fans. A blockchain accelerator was also rolled out by an Israel firm to boost innovation in the sports arena and bring benefits to football team. The semi-professional club in Gibraltar was also the first sports club in the entire world to pay its players in part using cryptocurrency.

Tags
Football Bitcoin Payment Ethereum Sports Blockchain Cryptocurrency Benfica Industry Club
Most Popular
Jan 25, 2022 at 12:24
Price
Litecoin Declines as Price Deepens in the Oversold Region
Jan 25, 2022 at 11:30
Price
Weekly Cryptocurrency Market Analysis: Altcoins in Oversold Regions as Buyers Regroup for a Price Rebound
Jan 25, 2022 at 10:32
Price
Ripple Fluctuates above $0.56 as Bears Threaten to Resume Selling Pressure
Jan 24, 2022 at 12:12
News
30 YouTube Channels Hacked; Is it Another Reason for Bloggers to Switch to Decentralized Streaming Platforms?
Jan 24, 2022 at 11:15
Price
Ethereum is in a Tight Consolidation, May Slide Below $2,300 Low
More