Partnership Between TRON and Liverpool FC is Still in Turmoil 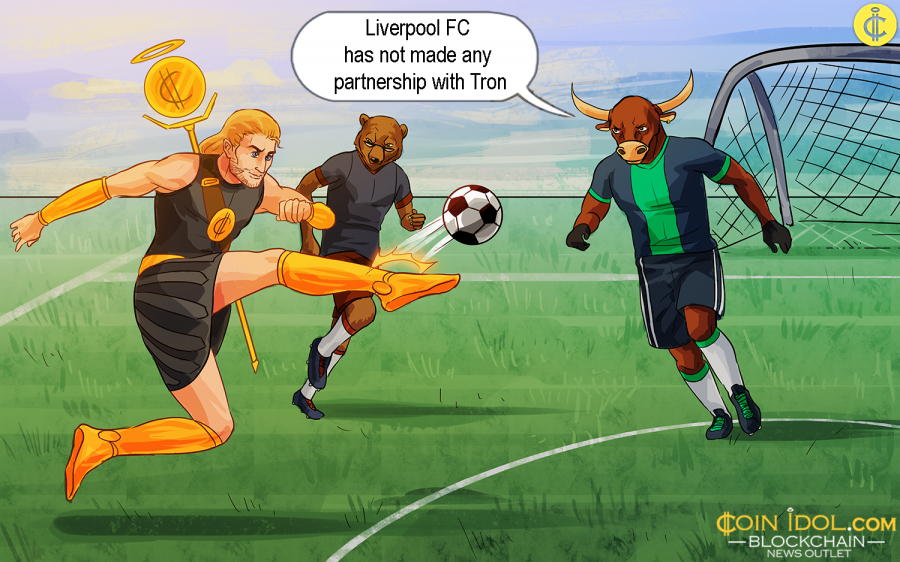 The CEO of TRON, Justin Sun, revealed the company was requested to enter into a partnership with Liverpool Football Club (LFC), but it seems Justin did not understand the situation correctly.

According to a spokesperson of Liverpool FC, the club has not made any partnership with Tron, Sun misinterpreted an unofficial invitation which was sent out to several firms, to understand properly the firm’s business.

Cliff Edwards, spokesperson of Tron revealed the informal letter contained weighty information that the football club had let on and disclosed.

“There was no ask to ‘better understand’ the business.” “The ask was to ‘connect and explore a partnership,’ which is exactly what Justin Sun tweeted,” Cliff revealed.

Thank you for the unique and innovative invitation, Liverpool! I am impressed and I'm looking forward to exploring this #TRON new partnership together! @LFC #TRX $TRX #BTT $BTT pic.twitter.com/7RhFw7QVbX
— Justin Sun (@justinsuntron) April 24, 2019

He also uploaded a video on the tweet which is showing LFC welcoming Tron with the club’s boilerplate greeting stuffs. A red envelope unfolds to show a screen, where Jurgen Klopp, the current LFC manager reveals:

That is what indeed produced all these details and reactions about the ‘partnership’ and what this really involved. The CEO promised to give more light on this issue, but he still maintained that this partnership in question was official.

Also, the head of cryptocurrency exchange Kraken, Jesse Powell, used Twitter to post a screenshot of an email claiming to be from Liverpool FC talking about the partnership which he had refuted and dismissed as a rip-off.

I think we all got spammed with the same sales pitch. I get 100 of these a day. @decryptmedia pic.twitter.com/WK0iHgHpdV
— Jesse Powell (@jespow) April 24, 2019

The co-founder of IAmDecentralised, a Tron-related blockchain startup, revealed that this new so-called partnership in question (going on between Tron and LFC) would mean a lot for the cryptocurrency industry. He is optimistic that the Tron logo will be on the red Liverpool FC shirt at Anfield stadium soon or later.

A partnership between #TRON & Liverpool, the current leader of Premiere League, semi-finalist in Champions League & one of the most legendary clubs in England, would be beyond massive for crypto to say the least.
Can already see the TRON logo on that red @LFC shirt at Anfield
— Misha Lederman (@mishalederman) April 24, 2019

If this partnership reaches fruition, Liverpool will join the Italian Serie A bull Juventus Football Club and Gibraltar semi-professional team, in participating in crypto activities and also being supported by companies that are involved in blockchain and cryptocurrency businesses.