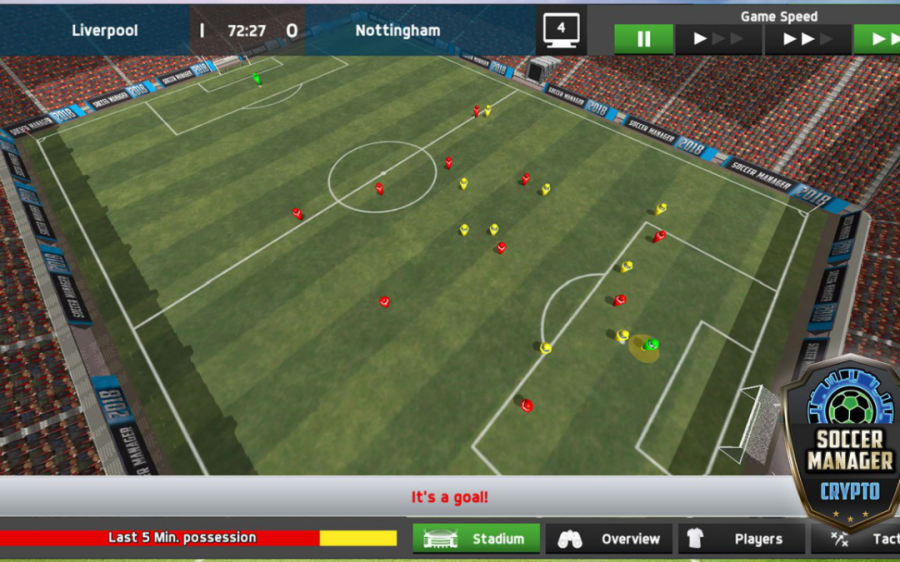 Soccer Manager™ Crypto is a provably fair, completely decentralised football management massively multiplayer game – the first of its kind. Provably fair means that it is mathematically impossible for the platform to cheat its players and everyone follows the same rules that cannot be broken.

Unlike other games, with  Soccer Manager’s blockchain-based approach, players have complete ownership of their football credits, players, stadiums- any value in the game, are similarly capable of being transferred, traded, or sold. For the first time, gamers can experience a real transfer market, where every success they achieve carries a real world value.

Soccer Manager ™ Crypto will run entirely on a revolutionary new Blockchain platform, Chimaera, that takes blockchain gaming one step further than just secure asset storage and management. Chimaera allows the actual game worlds to run on the blockchain.. This has numerous advantages such as: no need for servers, 24/7 uptime, no fraud, no cheating, and in-game items or assets that can be acquired in a provably fair way that gives them significantly more value than items that are created at will by developers without the players knowledge.

Andrew Gore the CEO of Soccer Manager ™. Stated that:

“We’ve been wanting to build a blockchain soccer manager game for sometime but have never found a suitable blockchain platform to host it on. After a lot of research, we came across the Chimaera project whos team have been at the forefront of blockchain gaming for several years.”

It’s mostly believed that CryptoKitties, a cute cat game built on the ethereum blockchain was the first blockchain game and is as complex as blockchain gaming gets, but this is not the case.

The  Chimaera development team were the instigators and original creators of blockchain gaming all the way back in 2013 through the creation of the world’s first decentralized MMO and the first true blockchain game, the  Huntercoin Experiment.

Huntercoin is an entire virtual world that runs unstoppable on the blockchain. Players move around a map, collect coins, fight others and steal their coins, these can then be traded on cryptocurrency exchanges

The  Chimaera team are developing an entire ecosystem where developers and gamers can immerse themselves in next-generation of blockchain games.

Back of the Net

Soccer Manager ™ represents a real Play-to-Earn gaming experience, where players gain and lose cryptocurrency value that can be traded for real world cash. The participants team and players have upkeep and needs that must be attended to. Players must grow their stadium and their fan base just as in any other Soccer Manager game. League Matches are played on average twice a week and the results of each match are determined over the course of around 60 to 90 minutes. Friendly matches and tournaments can be played at any time. Players can challenge opponents directly and compete for SMCs (Soccer Manager Coins).

Soccer Manager ™ is the source of this content. This press release is for informational purposes only and should not be viewed as an endorsement by CoinIdol. We take no responsibility and give no guarantees, warranties or representations, implied or otherwise, for the content or accuracy. Readers should do their own research before investing funds in any company.