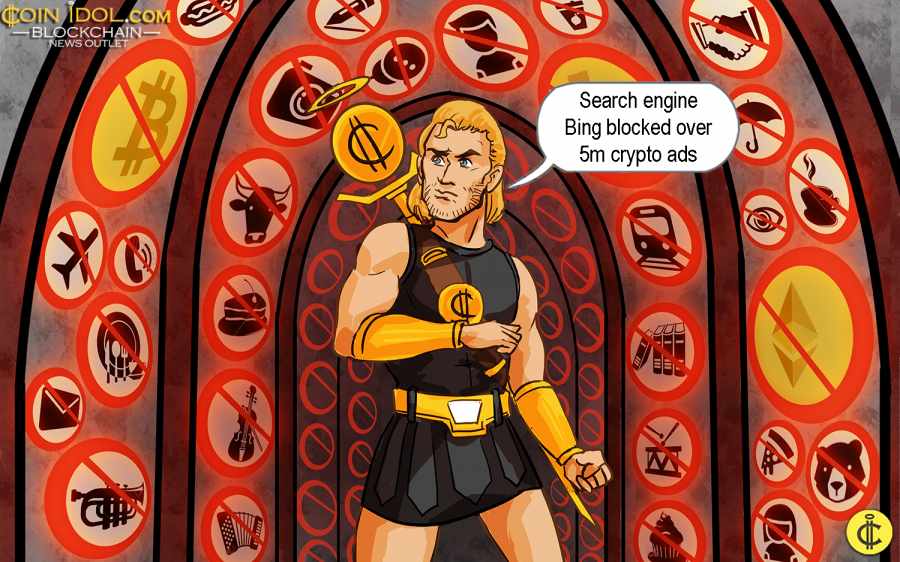 In its report published on Monday, March 25 dubbed “Ad quality year in review 2018,” the Microsoft-owned advertisement platform and a web search engine – Bing – revealed that it blocked more than 5 million crypto-related ads.

The firm’s takedown of illicit accounts more than doubled in last year alone, as it focused mainly on weapons, crypto, and third-party technology support scams.

Bing underlined digital currency as an important area to focus on by putting its efforts and mind to avert ads from breaching its policy rules.

“While digital advertising is extremely powerful and open, it is also horizontal to abuse by bad actors trying to defraud and deceive users by bringing harmful and misleading ads, with persuasive content and acquitted looking URLs that lead to phishing, malware attacks and other types of fraud,” Bing claimed.

Bing includes adverts related to cryptocurrency in a class with technology support scams and other weapon-related stuff. This is due to the lack of regulatory oversight which would confine the intemperate, unbridled and uncontrolled scams.

According to Bing, the pseudo-anonymity of cryptocurrencies such as Bitcoin (BTC), Ripple (XRP), Ethereum (ETH) and others, are a major target by the scam players and hoaxers for cheating end-users. More than 5 million ads have been successfully blocked from Bing due to this crypto content ban.

This hostile event by Bing comes just six months after Google announced that it is considering lifting a ban that it had earlier put on all cryptocurrency ads existing on its platform. Facebook have also started reversing their decision to block the crypto-ads content. Just like Bing, Twitter still holds its stance of blocking all the stuff related to digital currency advertising.

This scenario saw more than 18 million adverts accompanied by around 5,100 websites being blocked as a result of Microsoft’s advertising platform banning weapon ad.

In July 2018, Bing joined the struggle together with other fellow internet bulls to ban crypto-related ads, following its official post in May concerning ‘regulation’. The post stated:

“Because of the lack of regulation in crypto and related products, it poses a major risk to the users with a possibility for bad influences taking part in predatory behaviors and scamming the users.”

The general reason/factor behind the bans is due to lack of transparency vis-à-vis the end product, while the relatively embryonic stage of the crypto phenomenon purportedly left users unfairly and unethically susceptible to scams.

On the side of Microsoft, the development has aimed at blockchain, and the firm is still a potential investor in institutional trading platform known as Bakkt. However, Bing concluded that:

“The start of 2019 presents opportunities for taking our quality and protection efforts even further.”

Tags
Bing Advertising Search Cryptocurrency Platform Million Report Web Scam
Most Popular
Oct 04, 2022 at 09:16
Price
Litecoin Breaks Through Resistance At $54 And Sets Its Sights On The High At $64
Oct 03, 2022 at 16:13
Price
Ethereum Approaches Oversold Region And Targets The Low At $1,098
Oct 03, 2022 at 15:05
Price
Chainlink Price Declines Significantly As It Faces Rejection
Oct 03, 2022 at 14:51
Price
Weekly Cryptocurrency Analysis: Altcoins Struggle With Downward Corrections As Cryptocurrencies Approach Lower Price Levels
Oct 03, 2022 at 12:42
Price
Bitcoin Is In A Tight Range: A Breakout Or Collapse Is Imminent
More