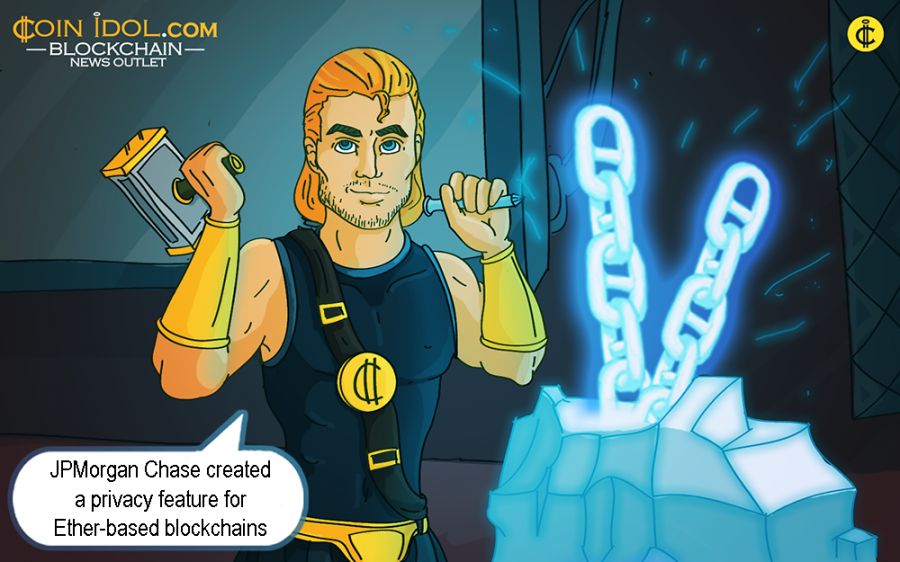 Every individual, company or organization needs privacy in one way or another and that is why the cryptocurrency community has for quite a long time been calling for it. After hearing the major privacy concern in the blockchain and finance sector, JPMorgan Chase assembled its tools and created a privacy feature for Ether-based blockchains which is fully companionable with the smart contracts platform. The novel feature will be working in the same way like Monero’s anonymity, additionally, it will not be displaying the details of both the sender and the receiver, and go on to store the amount transacted in a more transparent manner.

This newly developed payment system is fully-compatible and well-suited with Ethereum and other series of smart-contract platforms. Attackers can target people or firms with weighty balance on their accounts, but with this new privacy feature, it will be possible to take advantage of the “sealed-bid auction, private payment channel, confidential stake-voting, and private proof-of-stake.”

The head of JPM’s Blockchain section and digital currency strategy, Oli Harris, revealed that in this effort, they will offer a verification protocol for the mysterious extension where the sender can cover and camouflage himself and the receiver of the funds and other transactions in a bigger crowd of participants.

Harris also revealed that the additional bout of cryptography to hide users’ information never had any major effect. INew system’s performance is somewhat better and the team is working on enhancing the authentication in solidity smart contracts.

JPMorgan seems to be doing well when it comes to cryptocurrency and blockchain, recently, the financial bull launched its private bank-backed stablecoin called JPM Coin, that will first be used by its employees to make internal payments  and later will be spread externally for public use.

JPM was the first USA banking institution to develop and experiment a virtual token representing a traditional currency. The coin is based on the distributed ledger technology and facilitates prompt transfer of financial payments across institutional accounts. The JPM Coin will be integrated with Quorum Blockchain and it will be operable on many standard blockchain systems. CEO JPMorgan Jamie Dimon used not to be a cryptocurrency fanatic but he later changed his mind after observing and understanding its benefits, in fact, he now strongly believes that “blockchain is real.”

However, the United States based investment bank with its headquarters in New York, believes that governments and banks are in DABDA phase for Bitcoin and other digital currencies including JPM Coin. First of all, they tend not to believe in virtual assets, they even go ahead to put restrictions and bans on them, they later change their minds and start saying that they can be a good option if they are state-backed, but they will in due course appreciate that Bitcoin is the savior.

Tags
Privacy Cryptocurrency JP Morgan Monero Blockchain Smart contract Contract Anonymity Companies Finance
Most Popular
Jan 25, 2022 at 12:24
Price
Litecoin Declines as Price Deepens in the Oversold Region
Jan 25, 2022 at 11:30
Price
Weekly Cryptocurrency Market Analysis: Altcoins in Oversold Regions as Buyers Regroup for a Price Rebound
Jan 25, 2022 at 10:32
Price
Ripple Fluctuates above $0.56 as Bears Threaten to Resume Selling Pressure
Jan 24, 2022 at 12:12
News
30 YouTube Channels Hacked; Is it Another Reason for Bloggers to Switch to Decentralized Streaming Platforms?
Jan 24, 2022 at 11:15
Price
Ethereum is in a Tight Consolidation, May Slide Below $2,300 Low
More