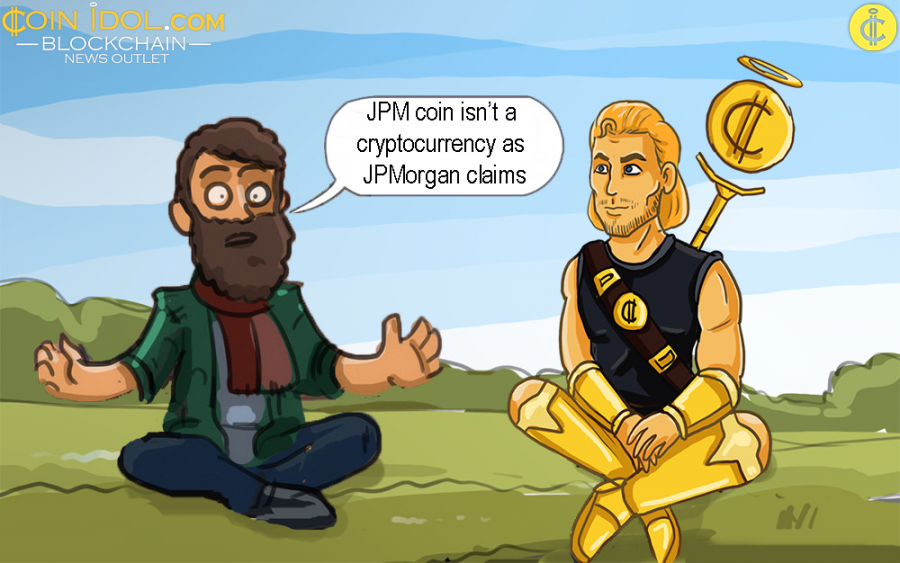 The giant U.S. bank, JPMorgan, declared plans to roll out JPM Coin on February 14 and has shown love for cryptocurrency on Valentine’s Day, notwithstanding Jamie Dimon having criticized Bitcoin (BTC) as being a fraud some time ago. It will be employed to conduct payments between customers and the lender will then labor to transfer international payment on to the distributed ledger technology (DLT), which could make a potential impact on the fintech sector.

As reported by Coinidol, JPMorgan wanted to transfer money at the swift speed at which smart contracts close rather than depending on ancient technology such as wire transfers. The head of the bank’s DLT projects Umar Farooq revealed:

“So anything that currently exists in the world, as that moves onto the blockchain, this would be the payment leg for that transaction,” said Umar Farooq, head of J.P. Morgan’s blockchain projects.
“The applications are frankly quite endless; anything, where you have a distributed ledger which involves corporations or institutions, can use this.”

But is JPM Coin a Cryptocurrency?

The asset is redeemable and tradeable for $1 which implies that it isn’t as volatile as digital currencies like BTC and is largely comparable to a stablecoin – the thing JPMorgan has clearly clarified that its coin isn’t. It was not rolled out for investments purposes, it will only be used to settle payments and debts inside the institution.

Would JPM merely be a cryptocurrency, instead of a crypto asset? In case JPMorgan’s newly established coin functions privately and is only employed for money transfers amongst customers and lenders, then it wouldn’t function on a public network the same manner cryptos like BTC, Ripple (XRP) or Ethereum (ETH) operate.

JPM Coin will operate on a DLT network known as Quorum, which needs permissions and customers have to be first approved by JPMorgan, as per a recent Motherboard article.

Jemima Kelly from FT revealed that because JPM coin will impersonate real currency, DLT may not be required at any point and some people might claim JPM Coin already exists and that it’s merely a deposit by an alternative name.

But why would people call it a crypto when actually it is merely an internal payments system? – for press coverage? It doesn’t make any sense following the volatility seen towards the end of 2017 and the latest attitude towards ICOs, Kelly said.

Is JPM Coin a Serious Threat to Ripple?

Truly, it depends on the way the asset is used and the client who uses it. In a Q&A, Farooq elaborates how JPMorgan’s clients would properly use JPMs.

“When one client sends money to another over the blockchain, JPMs are transferred and instantaneously redeemed for the equivalent amount of U.S. dollars, reducing the typical settlement time.”

This is like Ripple’s xRapid, which uses the crypto XRP as a spanning currency. To wire money using xRapid, a client exchanges fiat currency for XRP, the XRP is conveyed, then the receiver exchanges the XRP for traditional (fiat) currency. Remember, the only difference is that Ripple is not a stablecoin. It’s just a traded instrument and its price can swing and fluctuate extensively. JPMorgan is for sure promoting its asset as having exchange rate stability just which XRP, like other bullish traded coins, for example, BTC and ETH, lack.

Is JPMorgan trying to kill xRapid?

For now, it isn’t clear that this is its main target. First and foremost, JPM will only be applied for payments completely in USDs, which is not the case with xRapid that can handle several currencies plus cross-currency payments.

Secondly, JPM is only available and accessible to JPMorgan’s institutional customers. Clients can use it in sending money amongst themselves, but not to retail clients and (or) non-clients. Therefore, it is a very restricted and limited development to the bank’s internal payment rails.

However, although the currency remains limited to JPMorgan’s institutional customers, JPM would still loom over XRP’s plans. Culminating Ripple’s dreams of global domination might hence be precisely what the giant has in the pipeline. Let’s wait and see how this stand-off will develop.