Over $250,000 Ethereum Stolen From Cryptopia are Circulating 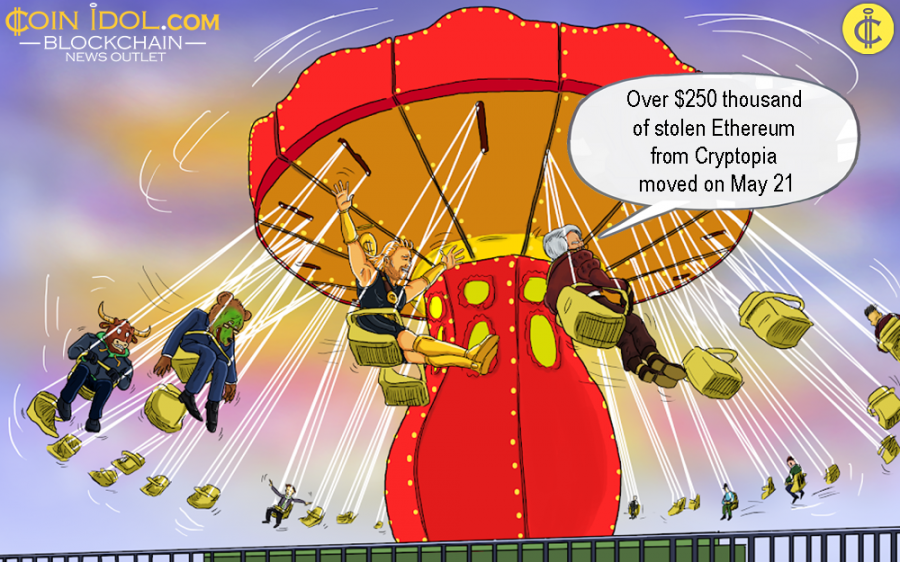 Ether on the Move

Around one thousand Ethereum (1,000 ETH) are said to have relocated to 0x7d90b19c1022396b525c64ba70a293c3142979b7, and this account doesn’t hold any other cryptocurrencies. Remember, almost the same quantity of ETH beforehand was moved from this very cryptocurrency wallet. The hackers who attacked Cryptopia appear to be in total panic as they are stuck with the dirty digital asset, as a matter of fact, they don’t know what to do with the money. The hackers’ situation is indeed the same as stealing an elephant.

The timing of the nudiustertian movement of stolen Ether funds is quite interesting, but basing on what is happening, hackers will soon be caught, identified and revealed to the public. It is a common trend, that each time the crypto exchange is attacked, the first suspects are the insiders (internal job).

One of the addresses which is said to be in connection with this theft, transferred around 499 ETH to a crypto exchange known as EtherDelta, an exchange that was formerly penalized for dealing in unregistered and uncatalogued securities - the address was identified as 0x338fDf0D792F7708d97383EB476e9418B3C16ff1.

Lazarus Hackers at the Wheel

In January 2019, the hacked crypto exchange lost over $18 million to thieves in a period of just fourteen days. Cryptopia has gone into liquidation and went ahead to warn its esteemed users not to hope that they will get back all funds they held before the hack. Furthermore, Cryptopia was unable to meet its debt obligations because of the deadly unexpected attack it faced, which made the interest, confidence, trust and volume of its customers reduce significantly. The community is now asking why the user funds were not available to settle debts. The hacked exchange reopened its usual trading services in March, with 40 trade pairs.

Recently, Cryptopia employed two senior liquidators identified as David. R and Russell. M to provide the exchange with important assurance, tax and advisory services. Cryptopia is not the only exchange to be hacked. Other big exchanges such as Binance, DragonEX, Bitfinex, CoinBene, Mt. Gox, Coincheck, were all attacked and up to now, no one has ever been caught. But, the hackers group Lazarus from North Korea has always been accused to be behind these attacks.

Tags
Cryptopia Ethereum Cryptocurrency Exchange Hack Platform Social media New Zealand
Most Popular
Jan 25, 2022 at 12:24
Price
Litecoin Declines as Price Deepens in the Oversold Region
Jan 25, 2022 at 11:30
Price
Weekly Cryptocurrency Market Analysis: Altcoins in Oversold Regions as Buyers Regroup for a Price Rebound
Jan 25, 2022 at 10:32
Price
Ripple Fluctuates above $0.56 as Bears Threaten to Resume Selling Pressure
Jan 24, 2022 at 12:12
News
30 YouTube Channels Hacked; Is it Another Reason for Bloggers to Switch to Decentralized Streaming Platforms?
Jan 24, 2022 at 11:15
Price
Ethereum is in a Tight Consolidation, May Slide Below $2,300 Low
More