Dark Side of the Coins: Cryptocurrencies on the Darknet 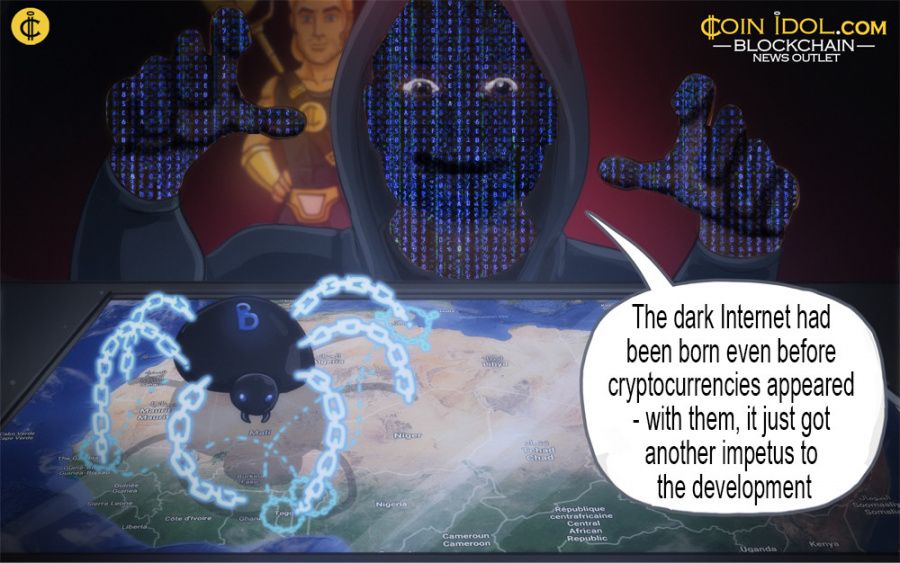 While surfing the Web, not everyone realizes that actually, two parallel worlds exist there: the usual Internet and the darknet, an area much deeper and much more mysterious.

The term “darknet” first appeared in the 1970s and referred to the private networks with a high degree of confidentiality. And though, initially, the "anonymous Internet" didn’t mean something dangerous, gradually it started to go underground and became a means of communication for illegal activities and crime.

The shady corners of the Deep Web resemble the usual Internet a lot, except that it’s impossible to get to the “other "side” via Google search. For this, special protocols ensuring anonymity are needed. Most often, people use browsers like Tor with Onion routing, which hide the IP address and transmit data in encrypted form. Thus, the user gets almost complete confidentiality while being online: visiting any websites and forums, communicating via instant messages. His Internet activities are invisible to the outside world, even to officials and the police.

The name "darknet" is not just an allusion to the far side of the Moon. This overlay network is really dark, with multibillion-dollar turnovers on the black markets. The platforms for drug trafficking, weapons, fake IDs and passports - that’s only a small part of the darknet.

Until recently, “Silk Road” was the most popular black marketplace on the Web. A kind of illegal Amazon, it offered everything - from drugs to killer’s services. In 2013 the FBI managed to shut the site down.

According to Australian studies, 47% of all bitcoin transactions happen on the darknet. And, of course, involve criminal activity.

Cryptocurrency is ideal for illegal operations, providing the necessary level of anonymity. Tracking a wallet’s owner is extremely difficult, despite the fact that in the blockchain everything is transparent and open. Such a paradox. Basically, cryptocurrencies give carte blanche to the outlawed.

Thus, according to an FBI report, the turnover of the previously mentioned "Silk Road" amounted to 9.5 million bitcoins (about 1.2 billion dollars). And that’s just for the two years of the website’s existence. Of course, the bitcoin price at that time was far from the present, but after all, "Silk road" is not the only black market: one disappeared, but others showed up.

One can say the digital money with its anonymous transactions creates an ecosystem where the shadow Internet and illegal trade can prosper.

Indeed, there is much to think about.

Bitcoin is not the only cryptocurrency popular on the Onion network. According to the research performed by analytical company "Recorded Future", Monero is widely used in the Western world, while Russian "colleagues" prefer Litecoin.

Monero, in particular, is already considered to be the darknet queen. In fact, bitcoin transactions cannot be called completely anonymous – they are pseudonymous. If a wallet is associated with the real owner, then each operation can be tracked. For illegal activities, such a "vulnerability" can become crucial indeed.

On the contrary, Monero is designed in such a way that it is absolutely impossible to identify a wallet’s owner. Based on the Cryptonote technology, the Monero network uses group signatures. When a transaction takes place, the owner's address mixes with hundreds of other random addresses, thus ensuring confidentiality.

Many agree with the statement that Monero is an extremely attractive means of payment for malicious people. Tyler Moffitt, a representative of Webroot, a company dealing with cybersecurity, admits:

"It makes perfect sense for the darknet auction site to welcome Monero. It's more secure than bitcoin since the transaction blockchain of bitcoin can be viewed publicly".

Surely, many of us remember the massive ransomware virus WannaCry, which raged in May-June 2017 and attacked computers in more than 150 countries. Well, in the end, the criminals turned all their “earned” bitcoins into XMR (Monero).

It is no surprise that the titans of the "Deep Web" are introducing Monero as a means of payment. For example, monero support was announced at the end of January 2018 by the largest black platform "Dream Market", functioning since 2013.

Unusually enough, the brainchild of Charlie Lee, Litecoin, is also gaining popularity on the dark network. A fork of bitcoin, this coin has similar features and doesn’t provide total anonymity, unlike Monero. Nevertheless, today Litecoin occupies about 15% of all transactions on the western darknet, while in Eastern Europe this figure reaches 35%. The thing is that Litecoin provides fast and cheap transactions, gradually replacing its slow and expensive "big brother".

Officials and security agencies of many countries are seriously fighting against illegal activities on the darknet. Watching such a "successful union" of crime and cryptocurrency, they have become even more sceptical about the issue of legalizing digital money. At least until they introduce a fully-developed mechanism for regulating cryptocurrencies and transactions with them (which, by the way, in some way contradicts the whole philosophy of bitcoin described as by Satoshi Nakamoto).

Of course, there are other reasons that restrain the process of legalization, related to tax issues, money laundering, ICOs and investment risks. However, while in these cases it is possible to come to a decision on introducing AML / KYC procedures and laws that regulate token sales, the situation is completely different with organized crime or drug trafficking on the darknet.

The dark Internet was born before cryptocurrencies appeared - with them, it just got another impetus to the development. Most likely, the banning of digital money (or its full destruction, because the anonymity feature doesn’t actually allow the banning of crypto) will not disroot the criminal activity. It will weaken it  - yes, for sure, but nothing more. The only way is to fight not against coins, but against black markets.

Cryptocurrency is a fuel for the darknet, but a car won’t go without a driver. And these are the criminals who started it. The criminals are the people we must fight, whether with the help the FBI or other intelligence agencies.

Actually, it’s better not to dive into the parallel world of the darknet whatsoever. After all, the darkness might take over.