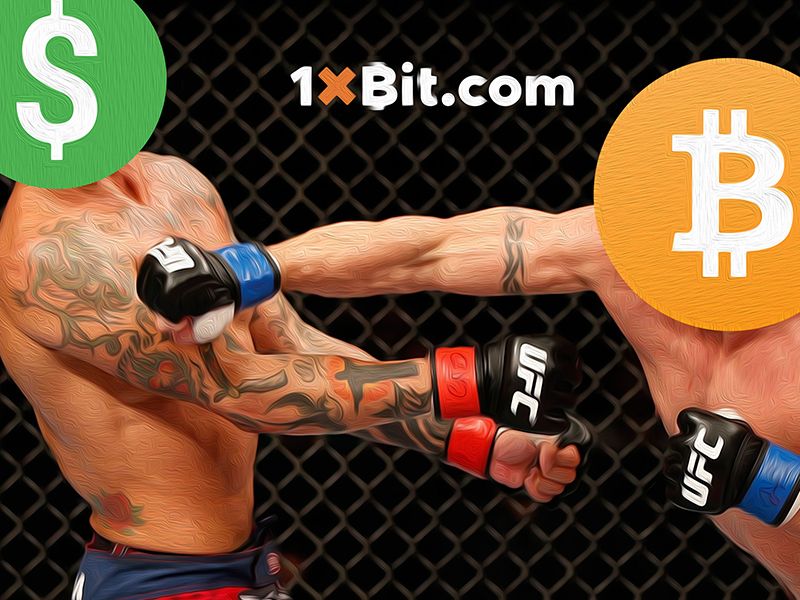 The rate of adoption for cryptos and their underlying technology, blockchain, has grown significantly since the market boom from 2017. Even sports bettors have been exposed to the use of cryptocurrencies.

1xBit is one of the best Bitcoin sportsbooks and provides an unmatched list of sport and events that users can place their wagers on. But the platform is not limited to Bitcoin only, as it offers support for more than 20 other tokens and coins such as Ethereum, Dash and Zcash. Players are able to bet on almost anything, having numerous betting options for each sport.

The website also features a casino, and there is the option to bet on live events in addition to virtual games. 1xBit is a diversified platform for those players that are keen on betting on a wide assortment of different sports, events, and games.

A New Section is Now Available on 1xBit: UFC

The website features various sections for its bettors, the most recent introduction being one that focuses on UFC.  The Ultimate Fighting Championship (UFC) is a famous sports league which promotes mixed martial arts events all over the globe. After acquiring a TV deal and expanding to Australia, Asia, Europe, and new markets within the United States, UFC has greatly increased in popularity and mainstream media coverage. This expansion naturally brings in a larger number of viewers and fans.

Taking note of this popularity surge, 1xBit released a dedicated section to this sport and its respective betting community. 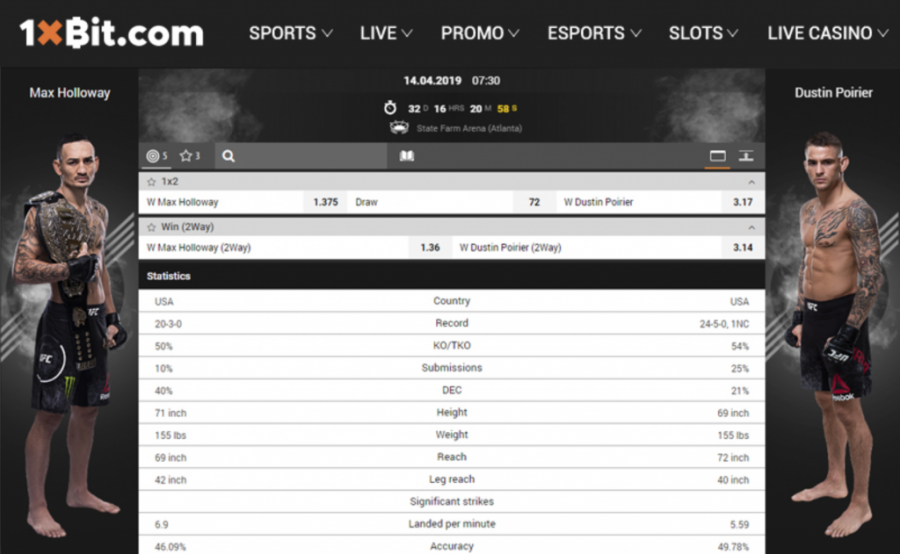 The world of online betting is not without its perils. As players do their best to maximize their earnings by placing the winning bet, the industry is plagued by a lot of unfairness and untrustworthiness. Bookies have been accused of releasing modified odds, stats and enticing promotions and bonuses to deter users from winning.

By using an implementation of blockchain, 1xBit offers a secure and transparent environment for all its customers. As the DLT bookie only accepts cryptocurrencies, all transactions and payments are stored on the respective chains of the coins used in the process. Anyone can revise the recorded information and any entity can not change it.

In comparison with traditional bookies, signing up for an account at 1xBit is easy. Registration can be accomplished with just one click and almost no personal details. Just select the currency account and enter your email and the system will generate a password and user ID which will be sent to your email. Two-factor authentication is an option which can be enabled at this point to protect your account.

Users that are accustomed to sportsbooks know that the regular sign-up process is very difficult and involve detailed verifications.

DLT bookies are able to provide a large variety of categories for betting as the processing of a transaction is more efficient when compared to traditional sportsbooks.

Cryptos in the Octagon

It seems that cryptocurrencies have had their fair share of dabbling with UFC advertising, and from the looks of it, they will not be stopping.

The Litecoin Foundation struck a partnership in December 2018 with Ultimate Fighting Championship (UFC) league to boost altcoin promotion. This made Litecoin the first cryptocurrency to be featured in the octagonal fighting ring of MMA. In 2019, Litecoin sponsored UFC 235 fighter Ben Askren, which showed great enthusiasm and support for the community.

Litecoin claimed to be the first crypto to sponsor a UFC event, and the Litecoin Foundation stated that the “millions of viewers” at such events would aid and increase crypto awareness on a global scale.

A blog post of 1xBit conveyed the sponsorship of Stratis for a boxing match. Stratis (STRAT) is a blockchain as a service platform that builds decentralized apps (dApps) for private blockchain use. The project backed up James DeGale in his fight for the Super-Middleweight title, which happened on February the 23rd.

1xBit’s blog also includes news about the crypto, blockchain and sports scene as well as guides for setting up a crypto wallet and betting function.

Bettors that enjoy using cryptos as payment and have an affinity for picking out winners for UFC matches can now place their bets on the 1xBit platform.

Tags
Betting Blockchain Cryptocurrency Sports Technology Rating Market Adoption Litecoin Platform
Most Popular
May 02, 2021 at 11:54
News
South Korea Announces Testing of CBDC Right After Imposing a New Tax Framework; Is It a Coincidence?
May 02, 2021 at 10:36
News
Chainlink Breaks Initial Resistance at $38, Eyes $44 Overhead Resistance
May 02, 2021 at 09:14
News
Uniswap in Minor Retracement, Set for More Upside Momentum
May 01, 2021 at 12:54
News
Russia is Going to Establish a Special Department for Exploring Artificial Intelligence
May 01, 2021 at 11:58
News
Dogecoin Price Pushes To The Upside; Can Bulls Breach The $0.45 Resistance Zone?
More