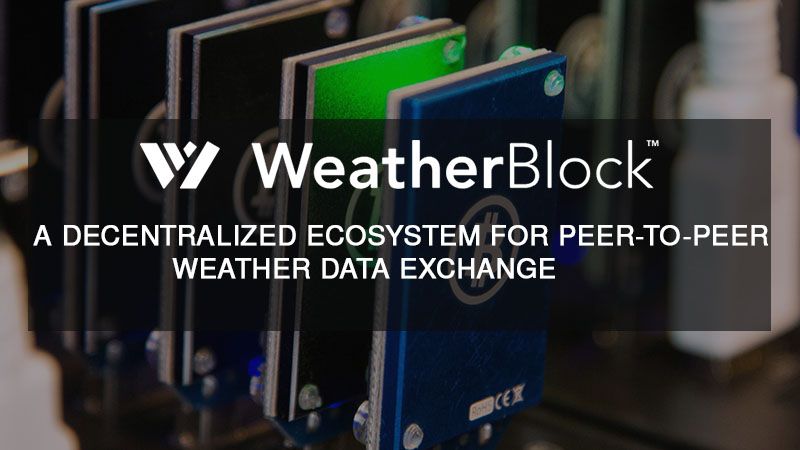 San Francisco, CA., Feb 13, 2018 -- “As ambitious as it sounds, the reality is that if you own a personal weather station today you’re already mining valuable data.” Said Daniel Han, Co-founder and Managing Director of WeatherBlock. “We are simply bolstering the integrity of data and shifting the benefits to the ‘miners’ in a shared economy model.”

The resolution of public meteorological data source is around ten by ten square kilometers using average macro temperature data of the region. This may be enough for ordinary consumers making lifestyle decisions such as what to wear, but industries like agriculture, transportation, renewable energy, smart infrastructure and the future of commercial drone operation have more pressing demands for higher resolution data.

In order to collect higher resolution weather data, referred to as nano data by WeatherBlock, you need a granular level network of accurate weather stations on the ground. The core competitiveness of the weather industry is the quality and frequency of the data, but the lack of hyper-local collection points has been the challenge. It’s simply because deployment of hardware is a difficult task and the cost for any single entity to cover is expensive. Thus, turning to the community for help with distribution of sensors and empowering individuals to moonlight as ‘meteorologists’ may be the most efficient way to collect small data.

WeatherBlock is building a decentralized peer-to-peer weather data exchange using next generation blockchain technology. The foundation proffers to develop a weather ecosystem, combining advanced IoT weather stations with blockchain protocol. Using unified community delegated consensus methods, they can utilize their soon-to-launch WXB token as protocol cryptocurrency for encrypted transactions. It will provide a complete set of solutions from hardware, software and data analytics through their product technology partner BloomSky, who hit the ground running in 2014 by launching the smart weather camera network through crowdsourcing. The noteworthy element of the BloomSky network is the collection of real-time sky images as one additional component to forecasting. In fact, they have a proprietary algorithmic cloud detection and recognition method that is patented. (Visit bloomsky.com to learn more about their current network, products and services.)

Daniel Han believes that blockchain technology will play two roles in the project: one is to strengthen the integrity of the data; the second is the economic incentive mechanism through tokenization, encouraging users to participate in the collection, exchange and verification of small data.

By adjoining the proven concept of crowdsource with the new consensus protocol of the blockchain, the ecosystem will create an entirely new market for weather commerce. The member-based community will be self-sustaining with mathematical governance of integrity proofs that will create friction in shared processing and validation. The new shared economic market using interconnected IoT weather devices will generate block production rewards and consumption incentives, employing publicly verifiable weather data storage and retrieval services. It will comprise of various novel cryptographic schemes that will prove integrity of weather data. Blockchain-based smart contracts will replace the centralized platform-secured transactions and generate certification links to eliminate the possibility of manipulation and misrepresentation. In terms of storage, most of the weather data previously uploaded by users is stored in AWS storage resources. In theory, both BloomSky and AWS can view or modify these data. Based on the blockchain protocol, both the private key and the digital signature of the user will be encrypted in a new node call nexus™ so the data is completely owned by the contributor in a shared economy model.

The existing data exchange systems and the necessity for a new approach to higher resolution data will only become clearer given the current technological and social trends as data production is going to dramatically increase on granular levels. This explosion of data is further contributed to the increasing adoption of IoT and connected weather devices such as BloomSky. The advent of blockchain technology poses a remedy to the current dysfunctional data commerce. It enables transparent systems that can simultaneously give data contributors control over their data while providing weather sensitive businesses the highest quality, ethically sourced information.

WeatherBlock’s vision is for people to monetize their backyard weather. They’re calling to arms for a ‘weatherlution’ from block to block. By running a highly secure, transparent and efficient marketplace on the next generation blockchain platform, commercial drone deliveries may finally be a common service we can all appreciate thanks to your data.