The True Cost of Running a full Bitcoin Node 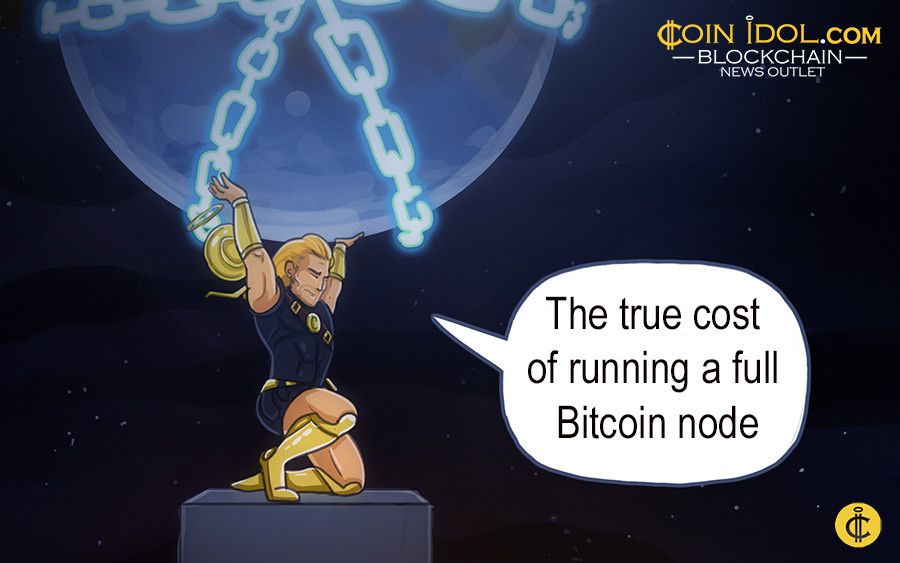 Bitcoin’s existence largely depends on how many people are using the peer-to-peer cryptocurrency. A bitcoin node can be an individual miner minting Bitcoins from his laptop or a chain of companies with complex mining rigs mining Bitcoin on a commercial scale. All these nodes keep the Bitcoin network running.

Bitcoin nodes also have inbuilt bitcoin wallets for management and usage of funds deposited in the wallet.

What is a Bitcoin Full Node?

Many people might still not be very certain about what a Bitcoin full node might look like. Not forgetting the elementary definition of a Bitcoin Node, we can give a description with technical details:
Bitcoin Full Nodes participate in the Bitcoin network. They validate mined blocks to determine whether they follow the rules (valid hashes, transactions add up, etc.). Their opinion on whether a block is valid or not constitutes the network consensus. They also participate in the Bitcoin peer-to-peer network by relaying blocks to other Full Nodes. These functions are important. They enable Bitcoin to deliver a ledger of financial transactions that nobody can alter after the fact.

A Full Node stores the complete ledger, since the beginning, as data files on a computer system. As of the date of publication, those data files exceed 100 GB in size. To be exact, the size is 103,773 MB. See the diagram below (courtesy to Blockchain Size).

The costs and Risks of Running a Bitcoin Full Node

The choice of whether to start mining Bitcoin or not depends on the user’s decision and preferences. Running a bitcoin full node on one's computer implies that someone has agreed to support the bitcoin network.  To get some clarity on that point, CoinIdol.com spoke to Chris Stewart, CEO at SuredBits, a company mitigating risk associated with handling Bitcoin private keys. He said to a correspondent of CoinIdol.com in the comment on Quora that:

“I would say there aren’t any known risks. People haven’t been able to Denial of Service (DoS) attack the Bitcoin successfully — yet. No one has been able to figure out a way to get access to things they shouldn’t have access to on the host machine yet. The costs widely vary. For instance, if electricity is expensive if your country then it will be more expensive. If you don’t prune the blockchain you are looking at taking up ~120GB of disk space on your machine. This seems like a large number —and it is — but this is because that 120GB is literally every transaction that has EVER happened on the Bitcoin network. Syncing will take you a couple days as your computer has to verify that every one of those 120GB of transactions are legit.
Seems like a lot of work, doesn’t it? But let's talk about the benefit. You have financial sovereignty. Your node can tell you when you have received a payment — no need to trust anyone else. There is no middle man. Just you running your own software to ‘be your own bank’. I HIGHLY recommend running a node if you are accepting large payments in Bitcoin.
You can get the node software from bitcoin.org.”

“The Bitcoin's blockchain is quite big and it's growing more and more each day, therefore, the biggest requirement would be the disk space, with at least 120 GB available. I saw people running a Bitcoin node on a RPi, so a 4 cores ARM CPU with 1-2 GB of RAM should be sufficient for home usage. Be careful, as a Bitcoin full node uses a lot of bandwidth.”