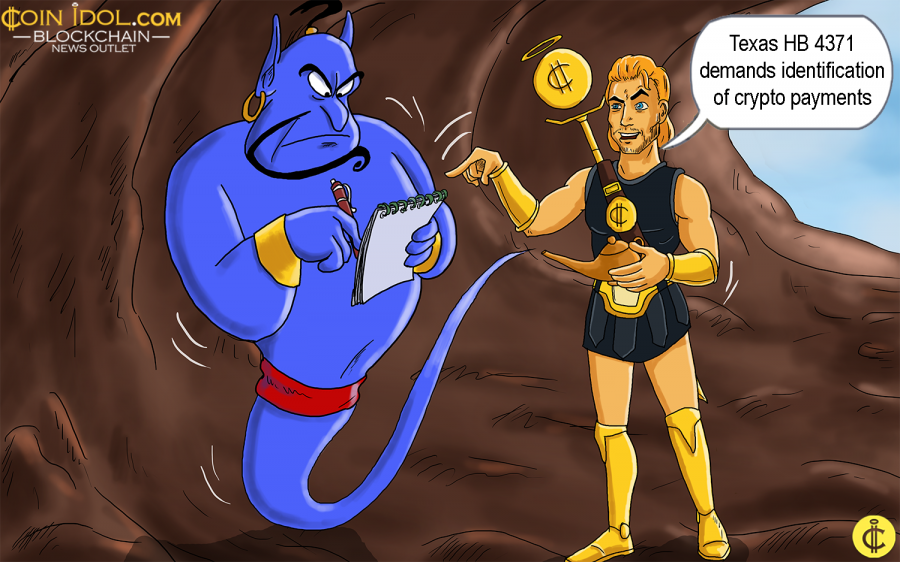 The Texas Republican senior representative Phil Stephenson has filed a bill regarding crypto payments, which proposes that each user who pays using virtual currencies such as Bitcoin, Ether, Ripple, EOS and others must provide their authentic identification.

In Texas House Bill No 4371, Phil took the legalization of digital assets to a completely new level. His bill acknowledged the blockchain as a tool that allows users to create financial aliases.

To avert that from occurring, the legislator proposed that Texas educate its law enforcement agencies on cryptocurrencies and indorse the exploitation of verified identity digital currencies (VIDC).

Congratulations #Texas, you're the first state to formally attack and attempt to ban anonymous use of #cryptocurrency in the US. https://t.co/KHaPgQiq5H
— Drew Hinkes (@propelforward) March 10, 2019

VIDC is the Bill’s Major Subject

The content of this particular bill encompasses legal definitions of digital wallets, cryptocurrencies, VIDC and blockchain technologies. The VIDC is the main topic of focus in this newly introduced bill. VIDC are officially defined as currencies which enables the genuine identity, individuality, personality, etc. of transaction’s sender and receiver to be recognized prior to giving a user full access to the crypto wallet.

Any receiver who accepts cryptocurrency payments – if one isn’t a VIDC, one must make sure the real identity of the sender is known, according to the proposed bill. Furthermore, any cryptocurrency which isn’t a VIDC won’t be used within Texas State. The Sate Securities Board, Credit Union Commission, Texas Dept. of Public Safety and Texas Dept. of banking will combine efforts to massively buoy up the application of VIDC.

In case it is successfully enforced, HB 4371 would make a crypto transaction illicit if the involved sender and receiver are now known to each other. This bill would embolden state departments of banking, credit union commission, and many others to provide tools to customers to differentiate between confirmed and unverified digital currency users. Excerpts read:

“[Texas] may not use a cryptocurrency that is not a verified identity digital currency — The Texas Dept. of Banking, Credit Union Commission, Texas Dept. of Public Safety, and State Securities Board shall collaborate to encourage the use of VIDC.”

Sure. Great efforts, user protection over everything, but might be not of a priority, also constitution wise, one can lay the case that cryptocurrency is essentially communication protocol, anonymous is essentially means encrypted, all forms of free speech, don’t be like France.
— Omar Shibli (@omarshibli) March 10, 2019

There is no way Rep Phil’s HB 4371 can prevent user from downloading digital currency wallets and creating thousands of unidentified pseudo-identities. Although his enforcement agencies be able to put a tracker on every public IP in Texas, there is no single way they can beat users who use VPN services, Tor, and others.

Of recent, Russia’s Duma Committee on Financial Markets also declared that they are planning the adoption of an obligatory identification process for users of cryptoassets.

Of late, State of Utah also presented a DLT-related bill “UT SB0213 aiming at averting blockchain businesses and firms from being considered as money transmitters. Others major U.S. states such as Ohio, Wyoming, California are also dealing with blockchain tech and crypto-related bills in order to level the ground for all the participants.