Ripple Labs Takes Lawsuits to U.S Federal Court, There Are Over 100 Plaintiffs 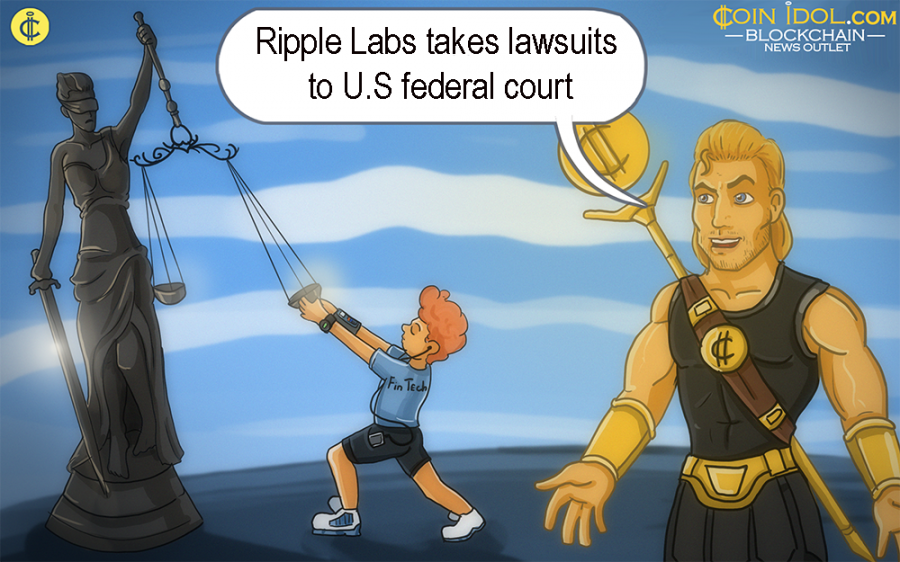 Ripple Labs, based in San Francisco, has now consolidated its lawsuits that are still ongoing into one tractable federal action. This effort has been dubbed "tactical brilliance" and "slick" by Jake Chervinsky, Securities litigation attorney, Kobre & Kim. It now meets all the necessary requirements that are specified under the U.S. Class Action Fairness Act (CAFA).

The blockchain firm is now chasing for three cases to be heard as quickly as possible at the US district court in the Northern District of California, claiming that they qualify as one single federal suit since there are over 100 plaintiffs, whereby only one among these resides in a separate state to that of the defendant. The total money argued is more than $5 million.

The plaintiffs who filed the three suits include Avner Greenwald, David Oconer and Vladi Zakinov, and demand around $167.7 million in damages for the hundreds and thousands of investors cheated. They have sued Ripple Labs and majority of its senior managers. Plaintiffs want the cases to be heard at the State level.

What is it That They are Suing Over?

All lawsuits revolve around the same issue, does Ripple counts as a security?

In May this year, a lawsuit was filed by Ryan Coffey, after he lost $551 by first purchasing and later selling 650 XRP in the month of January, though the suit of course never referred to Coffey's loss rather the XRP status.

He thought that XRP tokens were advertised as a great investment by Ripple, claiming that Ripple holds the biggest proportion and that all parties involved will gain from their increasing value.

According to the suit:

“Plaintiffs do not allege that they lacked information about the nature of these transactions. Nevertheless, Plaintiffs claim that they were somehow injured because the Defendants were allegedly required to register XRP as a ‘security’ with the Securities & Exchange Commission (‘SEC’) but failed to do so.”

Why Should the Case be Moved?

The lawsuit further accused Ripple of going on to bribe Exchanges such that they can list the token. Ryan later cancelled the case in August 2018, and now Ripple is planning to reinstate it and include it in the consolidated one, it will be brought by Zakinov.

The Attorney of Anderson Kill, Stephen Pallet, stated that:

“The conventional wisdom is that state court juries and judges tend to be more sympathetic to plaintiffs… defendants, on the other hand, have a perception that they’ll get a more fair shake in federal court.”

In mid-August 2018, “Securities lawsuits filed over either cryptos or BTC have tripled,” notes the US-based National Law Journal, in a report that places the rise at the door of the U.S SEC which has been cracking down especially on Initial Coin Offerings that have been refusing to identify as securities issuances.

The research was composed by big law firm Lex Machina who seem to have obtained their statistics from a thorough search of the key terms cryptos, blockchain tech or BTC in the conduct of lawsuit filings.

Earlier in 2018, several crypto bulls also sued Facebook, Google, and some other big platforms that prohibited their adverts, as coinidol recently reported.