20% of Italians are Aware of Blockchain and Cryptocurrency 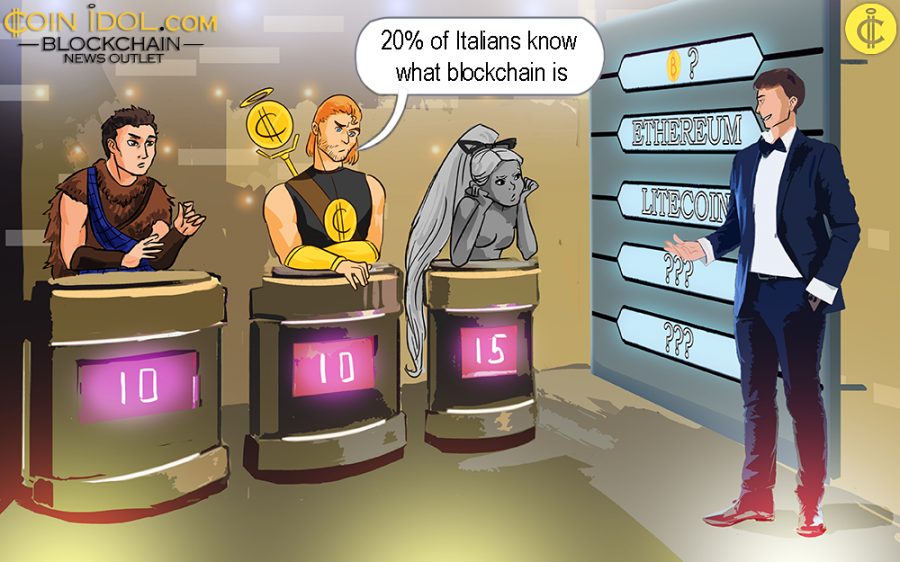 An Ipsos research piece for Digital360 dubbed “From cryptocurrencies to Made in Italy: the image and potential of the blockchain,” that focused its study on the companies’ and people’s perceptions on new technological innovations, shows that 20% of Italians are informed about what the technology is.

The survey that was conducted on 850 interviews between the Italian citizens and 200 managers of firms from various sectors, also highlighted advantages and risks of cryptocurrency and its underlying tech.

Optimism Among the Population

Considering those who have knowledge about blockchain technology, the awareness shows that this innovation is a great opportunity. In fact, 53 percents of the citizens regard it significant for themselves believing it will change their lives positively. Some of the characteristics that Italians mostly associate with these innovations are chiefly security, speed, transparency and openness. The 43% of the population (respondents) are optimistic with this futuristic technology saying that it is important for financial transactions, 33% for cybersecurity, and around 29% for government and PA (public administration).

When it comes to the business managers, 72% think that the technology is crucial for their lives, about 79% regard it to be important in growing and developing the country’s economy. The managers believe that blockchain can be an important application in financial transactions by about 71%, around 50% in supply chain and distribution, and 47% in government. This information indicates that in Italy, there is a high positive propensity on new innovations including cryptocurrency, blockchain, DLT, smart contracts, artificial intelligence (AI), internet of things (IoT), and others.

Italy has some great potential and great researchers in the field of technology, and the government is trying to take advantage of this technological evolution, though it is still a big challenge. People with the ability to innovate new things or improve anything concerning technology will have an added advantage when seeking for the jobs.

The technology is now out of the phase of promises and set to become a reality for business. The growth of interest and awareness among Italians is positive, which suggests a further push in the near future. Although still few people have fully understood the great potential it is able to express in terms of creating new business models, as one of the pillars of the digital revolution.

The role of institutions and politics on these issues is extremely important: it is positive that Italy is among the first to regulate blockchain and smart contracts on a legal level and to start a regulatory process. And the initiative of the ministry of economic development ( MiSE) is significant, starting with the two groups of experts dedicated to Blockchain and AI, to promote the development of knowledge and concrete applications.

However, the lack of skills, as well as the difficulty in assessing the expected benefits and the scarcity of available resources, which has blocked the development of these new significant projects. The government should work harder and invest more money in innovations. Remember, you reap what you sow.