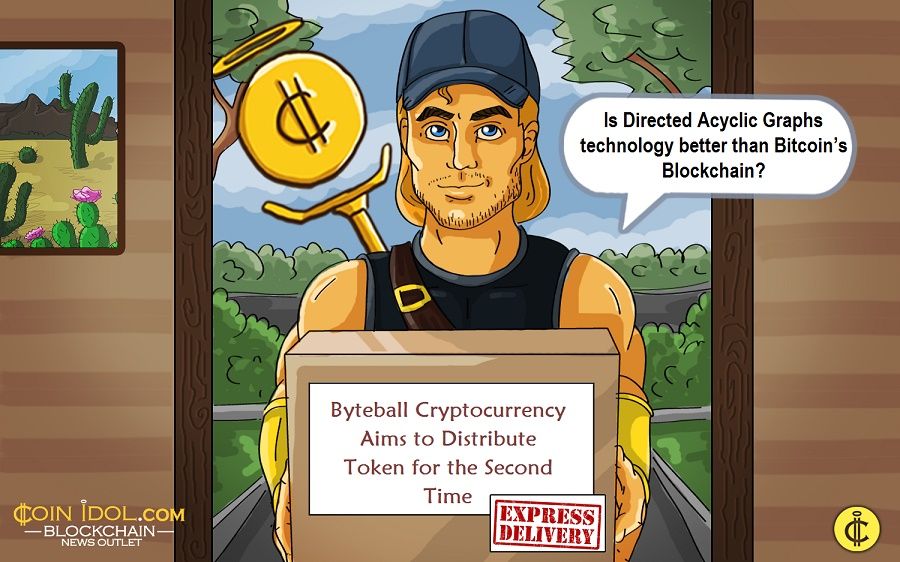 Byteball, a Russian cryptocurrency platform based in Moscow, has announced an upcoming distribution of its Bytes crypto tokens. The first round of the distribution took place on Christmas day, December 25, 2016, and the second round is to take place on February 11, 2017, at 00:33 (UTC) hours according to information on Byteball’s website.

In an attempt to move away from the Blockchain technology, which Byteball claims is slow and affected by block size, Byteball has incorporated Directed Acyclic Graph (DAG). Which it claims will solve the problems related to block size and propagation time between nodes.

Byteball claims they employ Directed Acyclic Graphs (DAG). Coinidol.com spoke to Anon the Peerchemist, one of the developers of Peercoin cryptocurrency, about the advantages with regards to transaction time and block size the platform can handle when compared to the Blockchain, he responded in a statement:

“DAGs are fragile and can easily split into indefinite amount of fragments who don't know how to make something out of the mess. Bitcoin and other coins has concept of miner or minter which periodically states "ok this is truth now, go on ”DAG does not have that. if you want something fully p2p and decentralized but slow and rigid - go with the blockchain.”

What is the major Difference between Blockchain Technology and Directed Acyclic Graph Technology?

To assess the difference in capabilities between the Blockchain technology as used in the Bitcoin network and the Directed Acyclic Graphs (DAG) being used by Byteball, Coinidol.com spoke to Faisal Ramdan Mulyadi, a software developer at Dunia, a financial information website. He said:

“In mathematics and computer science, a Directed Acyclic Graph (DAG), is a finite directed graph with no directed cycles. That is, it consists of finitely many vertices and edges, with each edge directed from one vertex to another, such that there is no way to start at any vertex v and follow a consistently-directed sequence of edges that eventually loops back to v again while Blockchain is a distributed database that maintains a continuously-growing list of ordered records called blocks.”

Do you think Byteball is more secure than Bitcoin?

In a press release, Byteball claimed their cryptocurrency unit, the Bytes, are more untraceable than ever which could be a thumbs up to many analysts. Coinidol.com asked Hanninton Wamala a software analyst at the Ministry of finance in Kampala, for a comparison between the Byteball traceability and that of Bitcoin. He responded by saying:

“An analysis of successful attacks on technologies that use blockchain are more pronounced than those that use Directed Acyclic Graphs. For exam IOTA seems far much more secure than bitcoin. I would say byteball Bytes are more secure than Bitcoin in my own opinion.”