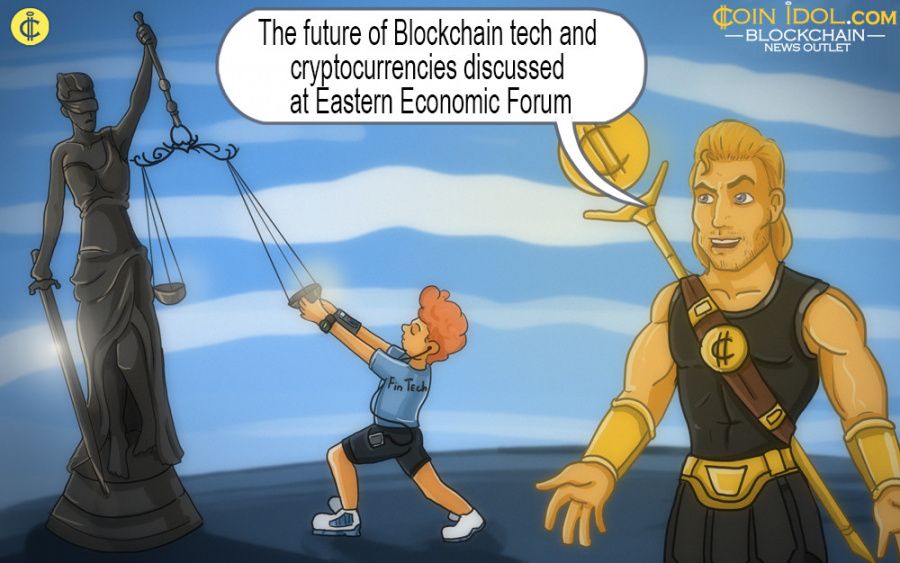 Blockchain technology attracts the attention of the world’s economic leaders. The Eastern Economic Forum, 2017, last week dedicated a full session to Blockchain and new technologies in the financial sector of the Asia-Pacific region.

Coinidol.com gives a short review of the Blockchain section of Eastern Economic Forum that took place in Vladivostok, Russia.

At the Eastern Economic Forum, experts from all over the world discussed the possible uses of Blockchain and advantages that it can bring to the development of modern economics.  According to them, the understanding of Blockchain and DLT in Russia is growing, however, there are still a lot of issues that should be defined by the government and businesses.

According to a survey taken at the Eastern Economic Forum, a majority of participants in the section dedicated to Blockchain technology believe that the most important issue today is to set clear regulatory guidelines for both cryptocurrencies and Blockchain-related businesses.

Boris Titov, Presidential Commissioner of the Russian Federation for the Protection of Entrepreneurs’ Rights, stated that Blockchain will change the world and may have an even greater potential than the Internet. He said:

“Today we can’t define what will be the scope of use of Blockchain technology.”

Future of Blockchain based national cryptocurrencies

Alexander Borodich, the Founder of Universal Blockchain Platform in Russia, pointed out that today the use of Blockchain technology is not only cryptocurrency but also various of other fields of use. Such as personal verification, the possibility of tracing any product from the manufacturing stage to the point of sale or even, if the product was broken, it allows us to find out what was done wrong at the production stage, to eliminate similar defects in the future.

“We don’t know all the aspect of the development of [Blockchain-related] field in the future, that is why we must move very carefully. First, the regulation that would allow storing and exchanging cryptocurrencies. Japan has already done it. It means a development of regulations that would minimize risks to investors but limits its [use] in the regions. Similar regulatory we have with the foreign currencies: citizens may store it, exchange it but can’t use it as a payment method on the domestic market. We pay for a taxi, buy products in a local shop or set business contracts with other residents of Russia using only national currency.”

Boris Titov also mentioned that most of his colleagues agree with this positions. It also means that restaurant businesses in Russia that have already started accepting cryptocurrencies will have to follow the regulation when it is taken. This would also require stepping away from the anonymity of the crypto wallets, all data should be transparent, and more over it will mean new requirements to cryptocurrency exchanges.

“Secondly, we believe that mining should be allowed and regulated in Russia. Especially the question of the taxes. Today, our new mining company allows us to place mining chips – special security chips – into mining rigs that would automatically take [tax] percentages in the currency that is mined, like Bitcoin, to the government accounts instantly.”

According to Boris Titov, the third regulatory question is ICO and investments from abroad. There are no sanctions on ICO and it should be used. He said:

“We must legalize ICO. China has banned ICO and the US decided that ICO must be regulated as traditional IPO, but we believe that it is wrong. The requirements that are now placed on IPOs are excessive. In past years the world has set too many requirements to IPO that today are actually excessive but doesn’t guarantee the avoidance of risks.”

He stated that the requirements to ICO should be first focused on the verification of the token issuer. Also, the personal and corporate risks of the company issuer should be transparent. But the questions of the projects recoupment and other requirements that are used to IPO should not be used to ICO today.

Direct investments in this area have recently exceeded $2 billion USD, in more than 500 companies. Russia is now facing a boom of cryptocurrency mining and Blockchain startups number growth.

Sergey Gorkov, Chairman of the Bank for Development and Foreign Economic Affairs (Vnesheconombank), believes that the cryptocurrency and mining trend that we observe now plays a positive role in the further development of the Blockchain technology. Today, even 14-17 years old teenagers actively participate in workshops and hackathons, and manage to propose interesting Blockchain-based projects.  However, the process in yet not enough fast and is far away from the mass adoption, and exactly cryptocurrencies will play the role of an impulse for further development of Blockchain technology.

The speed of transactions is still a question

Today world’s major banks and IT industry giants launch more projects on Blockchain and DTL, stated Antonio Fallico — President, Conoscere Eurasia Association; Chairman, Board of Directors, Banca Intesa. However, he pointed out that banks still are not satisfied with the speed of transactions using popular Blockchain (like Bitcoin and Ethereum) and have a lot of questions about the privacy of transactions. The question of regulatory is also still not clear in most of the countries, which showers the development of FinTech field.

The development of new Blockchains and new standards for DTL technology is one of the key issues today stated Igor Bulantsev, Senior Vice-Presiden of Sberbank and a Head of Sberbank CIB, confirmed that Sberbank works on about 20 Blockchain-related pilot projects at the moment.