China’s Digital Yuan Has No Official Launch Date, Though in Progress 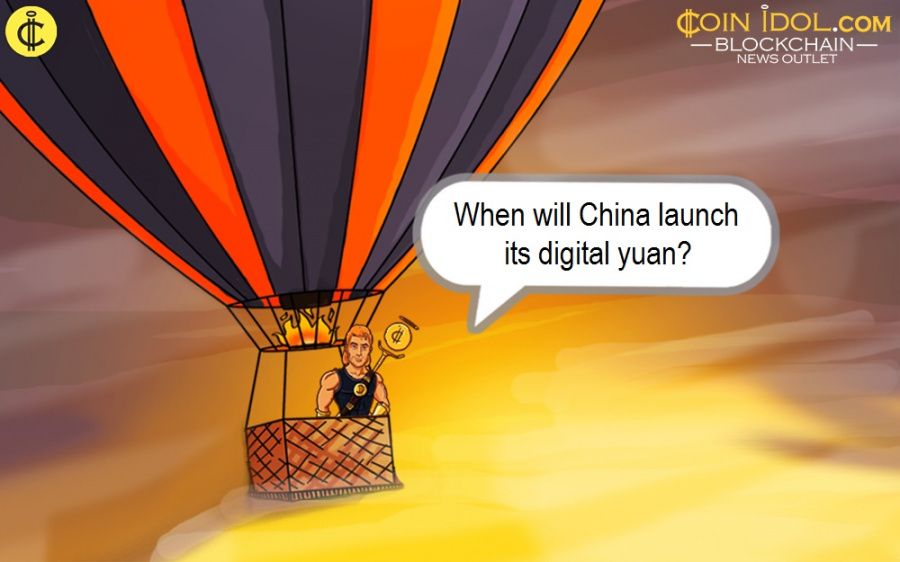 Although pilot tests for the digital Yuan have been launched and are happening progressively across four large Chinese cities, the governor of the Chinese Central Bank in a recent report by Xinhua news claimed no official date had been set for the launch of the long-awaited project.

Gone are the days when the word "crypto" was considered a “taboo” in China and any mistake mentioning it in the streets or on public transportation could raise eyebrows. Any crypto-related dealings in the communist country were considered illegal but this could be no more in the future once the country launches its own Central Bank Digital Currency (CBDC).

The CBDC is a digital yuan which is hoped to replace paper money. The idea first emerged in 2014 but was sped up when Facebook announced its plan to launch Libra, also another digital currency. The work progressed even much faster since the outbreak of the COVID-19 pandemic when countries realized the need for digital currencies in the fight against the spread of the virus.

At the peak of the pandemics, China was even thinking about taking paper money out of circulation as banknotes might serve the spread of coronavirus. However, soon enough the government realized the move would have dramatic consequences for the country’s economy, so they decided to put cash on quarantine and disinfect paper banknotes as well as coins. Nevertheless, the need for a digital alternative became obvious.

Coinidol.com, a world blockchain news outlet, recently reported that pilot tests for the digital yuan had kicked off across four large Chinese cities including Shenzhen, Chengdu, Suzhou, and Chen Xiong'An.

Despite the tremendous work done so far, the Chinese Central Bank Governor Yi Gang told reporters that there is no official date to unveil the digital yuan. Mr Yi praised the CBDC project, saying it is perfectly timed as more and more people yearn for legal tenders for the increasingly growing digital economy.

“The R&D and application of a legal digital currency help meet the public demand for legal currency in today's digital economy and improve the convenience, security and anti-counterfeiting level of retail payments,” Yi told the state-owned news agency, Xinhua on Tuesday.

China has concentrated on getting its CBDC through despite the inconveniences brought about by the spread of COVID-19. Many sources close to the country’s Central Bank rumoured that it could be the means of payment for the COVID-19 stimulus package.

The US is also considering the same as a means of providing government relief in the future. In April, the US Congress passed a bill that could see the US $ 2 trillion COVID-19 stimulus package wired to recipients through a "FedAccount," some sort of a digital dollar wallet, hence bypassing bank checks and transfers. Should that proposal by lawmakers go through, all subsequent government stimulus recipients would obtain their relief in a digital form starting January 2021.

Will blockchain and CBDCs go together?

The CBDC’s run on the wheels of blockchain technology and blockchain development certainly creates favourable conditions for the growth of CBDCs. Blockchain presents many advantages to digital currencies including transparency, speed, and safety. Nevertheless, as per a survey by the Central Banking magazine, 71% of central banks exploring the possibility to launch their own CBDC are not going to base it on a blockchain. The thing is that the institutions want to make their digital currency much more centralized, so blockchain won’t help them in this.

Nevertheless, China seems to favour the technology. China’s National Congress, an annual assembly of Chinese Communist Party leaders last week proposed the establishment of a blockchain development fund, a step forward to not just blockchain technology, but digital currencies such as the CBDC. The country also launched its blockchain network now open to both domestic and international users, while a number of its sectors are now either piloting blockchain systems or also enjoying it.

Much as the official date for the launch of China’s CBDC for public use is not yet known, the current pace at which the project has progressed coupled with the recent blockchain developments is especially a clue that it could roll out anytime soon.