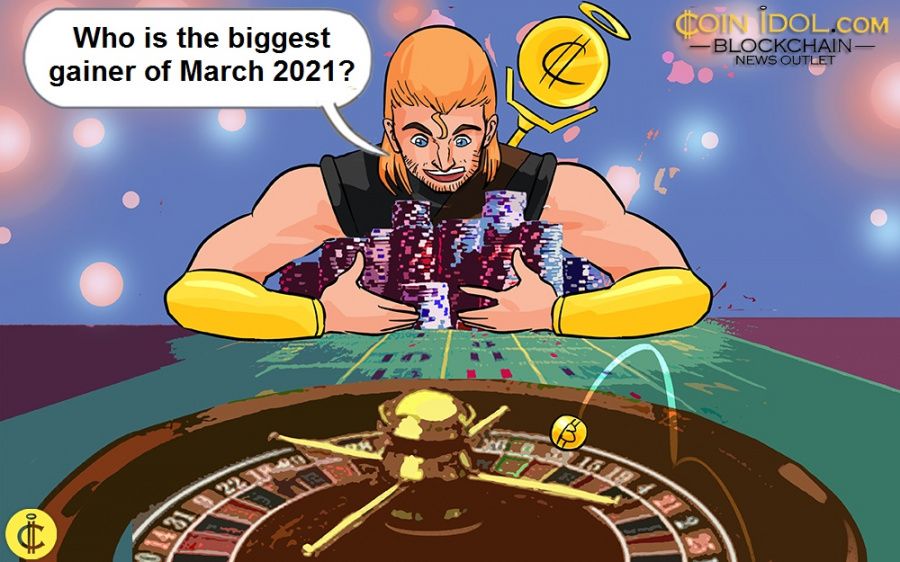 The month of March has seen many popular cryptocurrency gain much traction.  We have seen cryptocurrencies such as Filecoin, TRON, Qtum and OMG Network trade like hot cakes. CoinIdol, a world blockchain news outlet, analyzed the market to define five biggest gainers of March 2021.

Many popular digital coins including USD Coin (USDC), Bitcoin (BTC), Binance Coin (BNB), Ethereum (ETH), Litecoin (LTC), Dash (DASH) and others, have been accepted by mainstream financial industry and this caused a drastic gain in their prices.

Visa Inc. started accepting its USA customers to use USDC for payments using its payment network and this triggered the price of USDC stablecoin to increase from $0.9992 to $1.00.

In the same month, PayPal announced it has launched a new feature called Checkout with Crypto to allow its USA clients to use their cryptocurrency holdings to make payments with the help of its payment network and this effort also led to a boom in the crypto market.

A Venezuelan satellite TV provider Simple TV also showed interest in cryptocurrency. The company announced that it has started to accept its over four million clients to pay TV subscriptions in the form of digital currencies starting with specific coins including BNB, DASH, LTC, ETH, BTC and the prices  these coins gained. 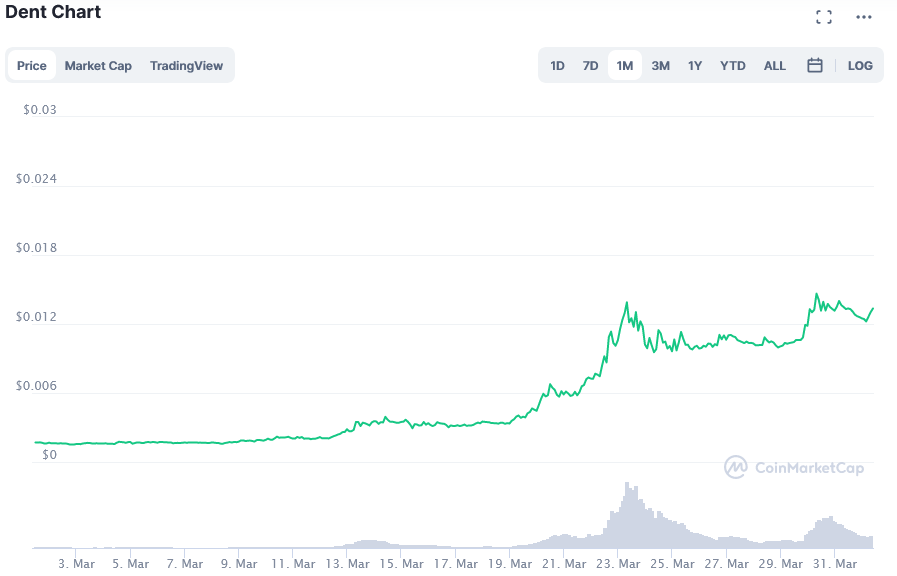 DENT is being supported by various crypto asset exchanges such as HitBTC, KuCoin, Binance, FTX and Upbit.

Based on the charts and trends of DENT’s price, the coin that operates on the Ethereum platform is to touch $0.1114 price cap, the level it last hit on January 9, 2018.

Chiliz (CHZ) was officially rolled out in 2019 and is now in Rank #42. CHZ is among the coins that operate on the largest distributed ledger technology (DLT) for online sports and gaming crowdfunding. 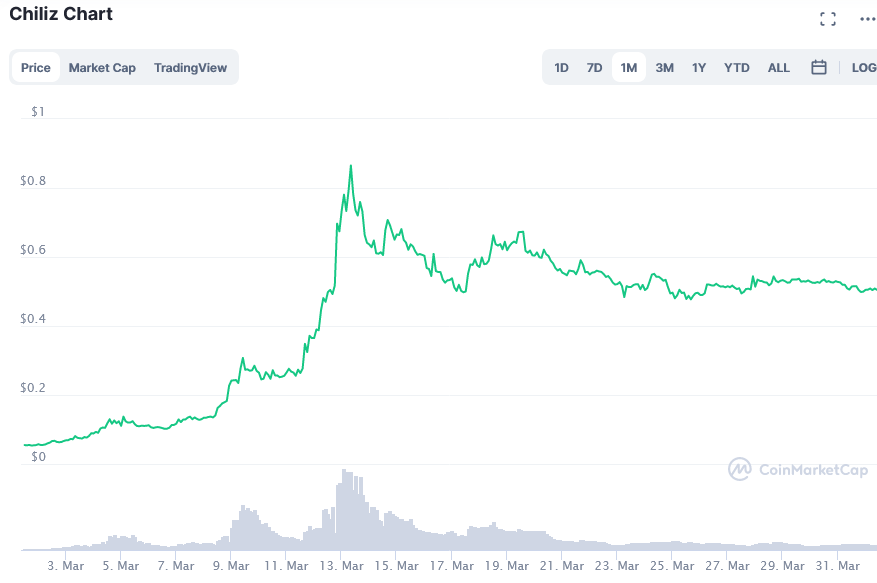 With the online betting, gaming and sports industry increasing its adoption and use for cryptocurrencies, Chiliz could sign a further increase. The trend shows that CHZ cryptocurrency could touch and trade above $1.00 price level.

Harmony (ONE) is currently in Rank #63 by crypto market cap. Throughout March 2021, ONE’s price gained over 537.52 percent. Harmony can be accessed and traded on many exchange platforms like KuCoin, Binance, Bitcoin.com Exchange, Huobi Global and HitBTC. 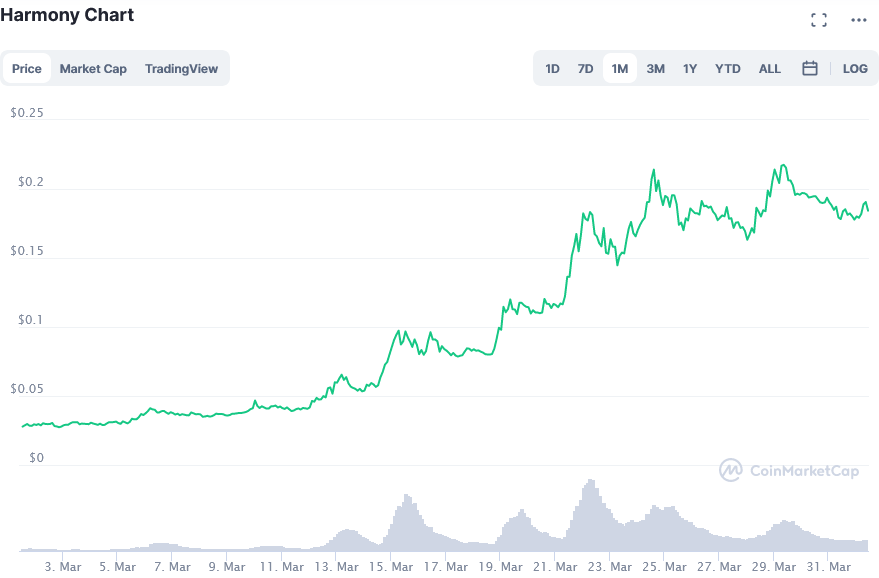 Harmony is a giant DLT platform created to facilitate the development and utilization of DApps (distributed applications).

ONE recorded its ATH on March 29, 2021 ($0.2164), meaning that March has been a good trading period for this coin. ONE crypto is now competing with other digital currencies such as Bitcoin BEP2, Zcash and Pundi X in the market.

Holo (HOT) was created to be distributed so as to lower down the threats kindred giving any one entity a lot of power. Holo cryptocurrency which ranks #40 by MC is the number four performer of the top 100 virtual coins in the world. During the last 30 days, HOT has skyrocketed by about 531.94%. Holo’s monthly low and high was $0.002478 (March 5) to $0.019 (March 30) respectively. 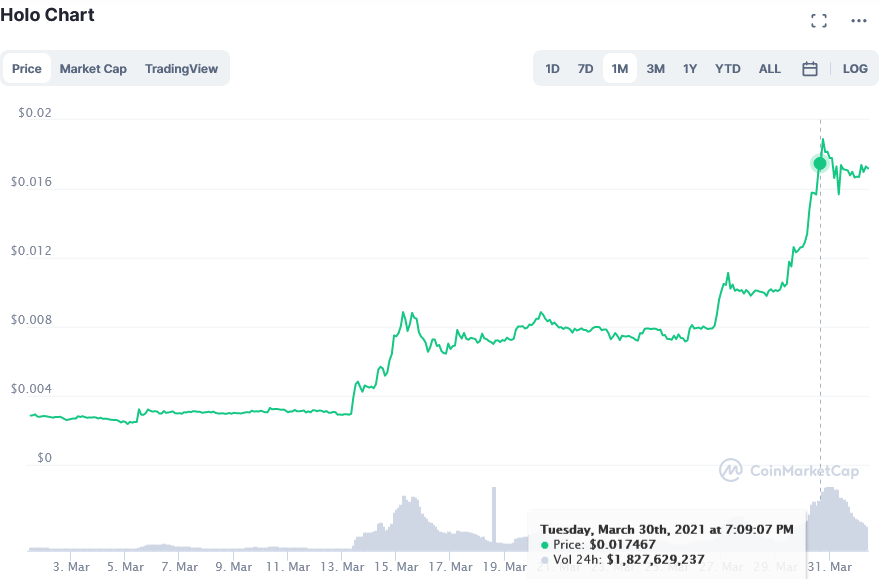 Holo is currently being traded in a variety of cryptocurrency exchanges including Gate.io, HitBTC, Binance,  Paribu, and Uniswap (V2).

If it continues with this trajectory, the value of Holo, the coin that operates on the centralized internet and Holochain platform, is to trade above $0.02.

Ankr (ANKR) is in Rank #82 by crypto market cap. The coin is traded in most of the top exchanges including  Upbit, Binance, HBTC, Huobi Global, and Huobi Global. In the past 30d, ANKR managed to gain almost 474.61 percent. 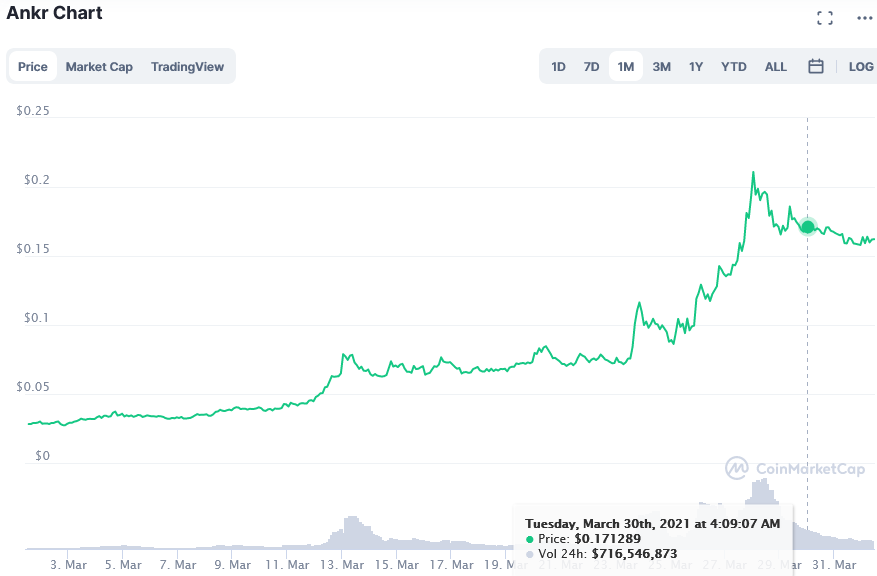 The Covid-19 pandemic has given a chance to the cryptocurrency industry to exercise its potential. Ever since the pandemic started, the market has grown by over  89.4 percent, and this is a clear indication of growing adoption and use of digital currencies globally.