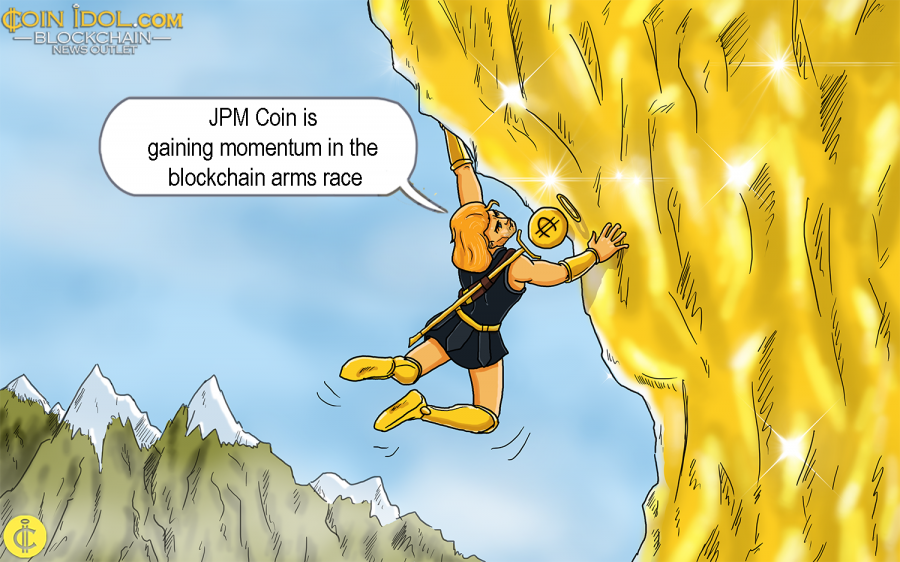 The newly created cryptocurrency “JPM Coin” by JPMorgan (JPM) is gaining momentum in the blockchain arms race amongst the giant United States (U.S.) Federal Reserve (Fed), at a higher rate. It’s the first bank to develop its own digital coin. The coin is pegged to the U.S. dollar.

Recently, JPMorgan announced that it had created JPM Coin, a digital currency that allows users to transfer funds promptly, and also push its weighty global transactions as part of its major wholesale payments commerce.

JPM reveals it could increase its usage of DLT if the prompt payments through its coin turn out to be more valuable.

Every Stakeholder has a Different Approach to Blockchain

JPM is not the only financial institution to internally pilot and test blockchain technology, other bulls such as Goldman Sachs, Citigroup, Bank of New York Mellon and Northern Trust have tested blockchain in varying case uses and are also working on cryptocurrency-based custody services. Citigroup has even experimented blockchain in its Treasury & Trade Solutions commerce.

The ex-head of JPM blockchain strategy Franklin Bi said that individual financial institutions are yearning to have full ownership of the upcoming immense technology which can effectively ‘overwrite’ the present payments facility.

“Having an alternative gives you a seat at the table,” revealed Franklin. “I think that is one of the motivating factors behind all of the multifaceted activity that’s happening in this space where it seems like every stakeholder from every angle has their own approach.”

Apart from JPMorgan, other banks have been quiet on their research as watchdogs and regulators develop an effective regulatory framework to guarantee the safety of this nascent technology. U.S. regulators and other authorities have been highly interested in solving the issue of vulnerable cybersecurity of companies and information privacy and will be addressed while using distributed ledgers.

Transformative Potential of Crypto and Blockchain

The Fed is also working on its own DLT network. Although the Fed has no major interest in issuing a private cryptocurrency, Lael Brainard, the Fed Governor has fronted actions on advancing its payments system.

“Because of the transformative potential of cryptocurrency and DLT technologies, the Federal Reserve is actively monitoring digital innovations in the financial system,” Governor Lael said.

However, Franklin believes it will be a slow race and he anticipates that the blockchain & cryptocurrency industry is still 10 – 15 years and a ‘terrific effort’ from a comprehensive renovation of the payments system.

JPM Coin is redeemable for $1, simply meaning that it is not as volatile as other cryptoassets such as Bitcoin. In other words, JPM Coin is a stablecoin, as Coinidol reported. The cryptocurrency will operate on a DLT system popularly known as Quorum, that asks permissions and every user has to be first permitted by JPMorgan.