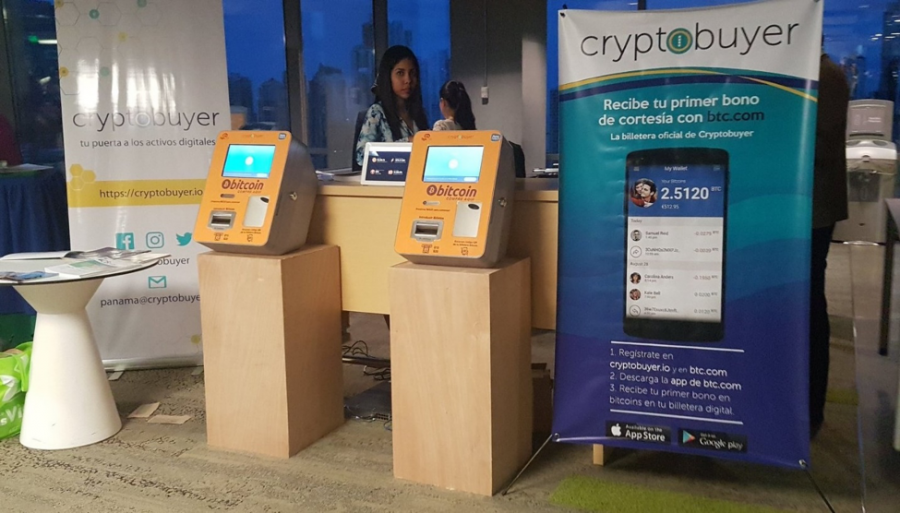 Cryptobuyer installed the first Bitcoin ATMs in a commercial bank as it announced plans for expansion, ICO, and the new Blockchain Academy Latam.

June 22, 2017, Panama City, Panama – Cryptobuyer, a leading cryptocurrency and digital assets company in the Latin America has gained the distinction of being the first company ever to install Bitcoin ATMs (BTMs) in a commercial bank after two of its BTMs found a place in the premises of Banistmo Bank’s headquarters. The installation of BTMs followed the recently concluded Panamanian Association of Fintech event. Cryptobuyer was one of the participants at the second edition of the event which was hosted by the second largest bank in Panama, Banistmo. The event witnessed widespread participation from the members of banking and finance community and the general public.

The CEO, Jorge Luis Farias was part of a panel of experts discussing the scope and applications of blockchain technology at the event. The panel discussion garnered the attention of over 300 participants from various industry sectors. The participation of Cryptobuyer in the Panamanian Association of Fintech event coincided with a recent report on Bloomberg covering the company and its use of blockchain technology to solve real world problems in the lives of people in emerging countries like Venezuela – a nation that is currently affected by hyperinflation and capital controls.

Farias, along with the CEO of Tigo CTM Cindy Zimmerman and the founder of Guldcoin Ira Miller, both technology partners of Cryptobuyer showcased the two BTMs installed within the bank. These state-of-the-art machines supporting both Bitcoin and DASH were well received as many people in attendance lined up to test the equipment. The company plans to install more than 20 of these Bitcoin ATMs across Panama and rest of South America as the first phase of its effort to create a cryptocurrency ATM network in the region.

The Global Business Developer at DASH, Daniel Diaz also took part in the panel and spoke about the advantages of DASH as one of the most promising cryptocurrencies. Cryptobuyer, recognizing the cryptocurrency’s potential announced support for DASH during the same event. Other prominent members in attendance at the event included Yari Romero, the CIO of CBChains.com – a venture capital, startup, and blockchain consulting firm, Alejandro de la Torre from BTC.com, Felipe Echandi Founder of Quanto mobile digital payments application and PanaFintech, Alejandro Palomar of Blockchain 360 Solutions and KPMG’s Glenn Tjon.

BTC.com’s Alejandro de la Torre, who came all the way from Amsterdam demonstrated the use of Bitcoin wallet and gave away over 100 gift codes, to be redeemed on BTC.com wallet for Bitcoin. Similarly, Palomar enlightened the audience about Blockchain technology while Tjon touched upon the impact of distributed ledger technology on global organizations.

After the panel discussion, Cryptobuyer announced its entry into the Ciudad del Saber (City of Knowledge) technology and innovation campus to set up base alongside 180 world-class companies and organizations including the likes of the United Nations, Copa Airlines, IESA and Hewlett-Packard. Cryptobuyer while setting up its headquarters in the technology hub will also develop Blockchain Academy Latam to impart cryptocurrency related education, training, and certifications to individuals, companies and organizations from Latin America and rest of the world.

And finally, the big news. The company also announced its plans for an ICO in the coming weeks as the company looks forward to expanding its business model and operations with a soon-to-be-launched product. More details about the ICO and the new product launch will be announced soon.

Cryptobuyer is a leading digital assets company working on providing simple, fast and robust solutions involving cryptocurrencies. The company offers solutions that connect virtual currencies to day-to-day, real-world interactions. The company also provides cryptocurrency and blockchain consultancy services to individuals, groups, businesses and organizations. Cryptobuyer is a partner of the Bitcoin Foundation of Venezuela and the Panamanian Fintech Association.

Cryptobuyer is the source of this content. This press release is for informational purposes only and should not be viewed as an endorsement by CoinIdol. We take no responsibility and give no guarantees, warranties or representations, implied or otherwise, for the content or accuracy.  Readers should do their own research before investing funds in any company.