Is the Coronavirus Outbreak a Positive Event for the Cryptocurrency Market? 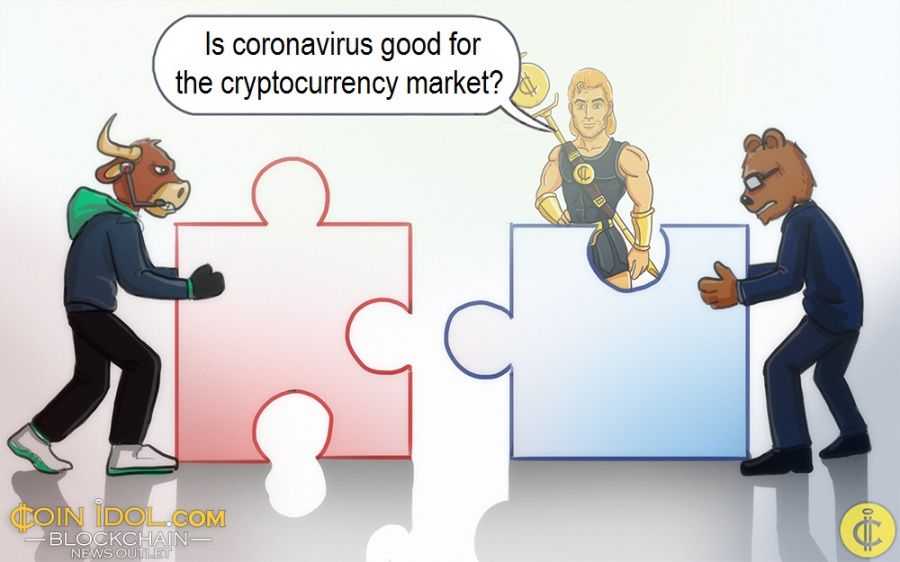 While the stock markets are shaking, the price of cryptocurrencies rises, despite partial red. The coronavirus that is bringing China to its knees and worries the whole world certainly influences the former, and in all probability also the cryptocurrency market. Not everyone is convinced, though. Let's analyze the situation.

The Current Price of Tokens

Since the beginning of January 2020 the price of cryptocurrencies have been following an uptrend that has brought the market cap of the sector from $190 billion to the current $287.9B. Obviously the graph shows retracements, and a reversal of the trend in the week between 18 and 24 January, followed by a recovery that seems to have already stopped in part.

The price of the main cryptocurrencies, starting from bitcoin, are in fact at the time of writing in positive territory. The gain of the market however proves to be contained, if we consider the constitutional volatility of this market.

Then there are exceptions, starting with Ethereum. The trend of the main altcoin most likely influences the news on the next issue of futures - not yet confirmed -. Litecoin also remains in positive territory, as well as Monero and Tezos.

Aside from today's uptrend, which could be a retracement, the price of cryptocurrencies has benefited from the contribution of new capital for over 65 billion since the beginning of 2020. Or rather: an examination of the graphs of the last half of 2019 reveals that it is more accurate to speak of capital returned. In fact, last September, before the flash crash of 24, the market cap was over $260 billion.

Why is the Cryptocurrency Sector Going Up?

Over the past few years, the price of tokens has shown that these digital assets are perceived and used by traders mainly as a store of value and as speculative instruments.

Alongside these roles, for several cryptocurrencies, Ether in primis, there is an additional role linked to another function that characterizes some blockchains, namely smart contracts and Decentralized Applications (DApps). The "real" purpose of bitcoin and other cryptocurrencies to provide a peer-to-peer (P2P) means of payment is much less relevant, at least for number 1. The exception is Ripple, the cryptocurrency developed to facilitate interbank transactions.

Obviously, when the cryptocurrency market is the subject of important bad news, the price of cryptocurrencies drops. But it has also been noted that when the stock markets fall instead, there is a good chance that the price of binary currencies will go up. The reaction of the traders is obvious: unfavorable positions are closed to open them where it seems safer and more profitable to invest.

China's Coronavirus (CoV) is slowing down the second most important economy in the world, the reopening of the stock exchanges of the Asian giant after the Chinese New Year has been postponed and the repercussions on other stock markets have not been lacking. Forecasts are pessimistic worldwide. Several sectors, including luxury, are already confronting the contraction in demand. And the surge in sales of health masks certainly does not compensate.

In this context, not even the growth of the safe haven par excellence is surprising: Gold. During 2018 and 2019 it happened that the noble metal and the BTC digital gold showed converging trends. The reason is simple: the queen of altcoins is believed to be an increasingly reliable investment. Slowly, it began to work alongside Gold in its safe haven investment role. Halving will follow in a few months (May this year). The question, in this regard, is not whether this will raise its price, but how much it will do. Black swans aside, of course.

At the moment, however, we can be sure that it is the Coronavirus rather than the perspective of halving that influences the price of cryptocurrencies. The dominance of bitcoin is in fact around 65-66%, lower than that of December.

However, several industry experts believe that the price of cryptocurrencies and the Chinese situation are completely misaligned. The reason? Whales, which manipulate the Bitcoin and digital asset market by representing its main catalyst.

In several cases the whale effect seems full-blown. For example, there are suspicious and slightly too frequent relationships between the value of Bitcoin and the expirations of its futures. And the mega handling of Ripple is well established and notoriously disastrous for its listing.

So a question must be asked. Are the whales factor and the CoV irreconcilable? The answer in my opinion is no.

We have seen many times how bad and good news (US-China trade war, US-Iran tensions) influence the digital asset market with a reach greater than that of other sectors. Among those with the greatest impact are the news concerning China. The absence of legislation affects, it is true. But a sentiment far more emotional than that which characterizes the markets where mainly professionals operate seems to do it. And whales definitely belong to the latter category.

In conclusion, there are whales and their manipulations, and there is a coronavirus that can increase the price of cryptocurrencies. Without antithesis.