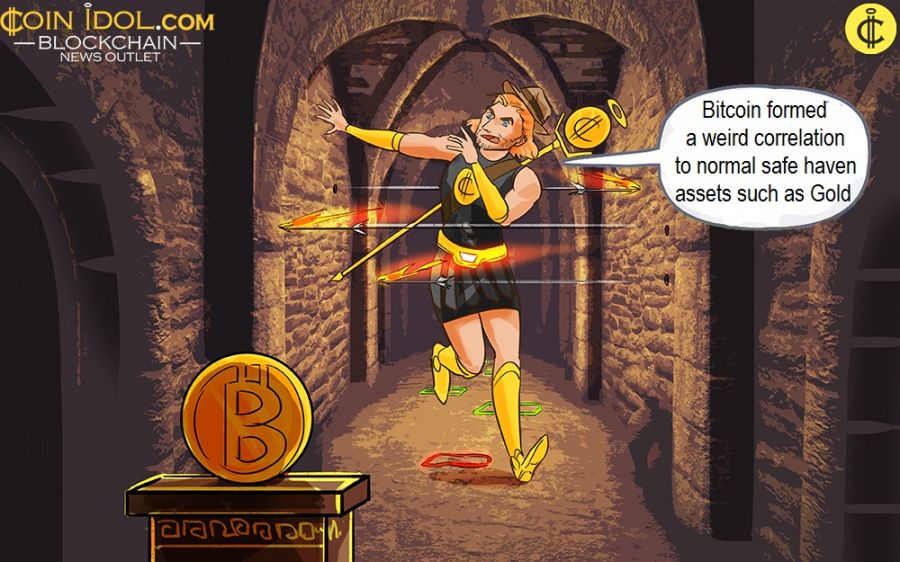 In the past few days, Bitcoin formed a weird correlation to normal hide-out assets such as Gold, when its trading price skyrocketed as political turmoil between the United States and the Middle East region started increasing earlier this year, and the price began plunging as tensions slighted relaxed. Due to the fear of losing their holdings, it is expected that most people living in both regions, decided to seek safe haven in cryptocurrencies especially BTC, and because of that its price had to surge.

There is a time when Bitcoin gained momentum hit and surpassed the $8.3k cap, however, when the situation started to calm down, the cryptocurrency broke below $8k overnight, and now, market experts have started to note that the coin could be in for a considerably bottomless pull back, and further stated that this could put it use in great jeopardy.

At press time, Bitcoin is changing hands at around $8,100 which is an almost 5% drop considering its notable 7-day high of $8.4k that happened on Wednesday January 8. The current market cap is standing at $146.3 billion and the trading volume is at $28.9 bln. The entire market capitalization is at $214.4 billion, and overall volume at $94.5 bln, according to coinmarketcap data. Bitcoin is not willing to stop dominating the entire cryptocurrency market, that is why its dominance is above 68%. 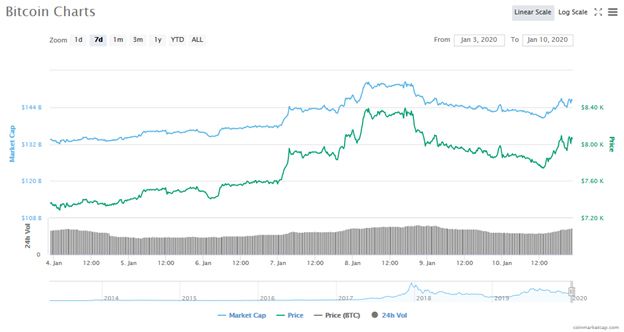 The major rally actually began in early-January when the United States drone strike on a top Iranian military leader Gen Qasem Soleimani, and the rally gradually amassed traction until Jan 7, when giants hit and surpassed the resistance which existed at $8. level. This price, which consequently became a key support level, was finally cracked below on Wednesday when whales bolstered their trading pressure.

The rise in trading pressure especially selling appeared immediately after the world discovered that – for the moment – the U.S. doesn’t seem to have plans of hitting back against Iran for their missile attack on an Iraqi military base.

Tags
Bitcoin Price Trading USA Assets Cryptocurrency Gold Market Volume
Most Popular
May 03, 2021 at 15:03
News
China Eyes February 2022 Beijing Olympics for Digital Yuan Launch but Is It Still Viable Amidst COVD-19 and Rising anti-China Movements?
May 03, 2021 at 14:17
News
Ethereum Rallies Above $3,000, Breaches More Resistance Levels
May 03, 2021 at 13:00
PR
Everything You Want to Know about Stellar, and Why it’s Getting Added to 1xBit
May 03, 2021 at 12:17
News
Bitcoin Reclaims $58,000 Support as Bulls and Bears Resume Price Tussle
May 02, 2021 at 11:54
News
South Korea Announces Testing of CBDC Right After Imposing a New Tax Framework; Is It a Coincidence?
More