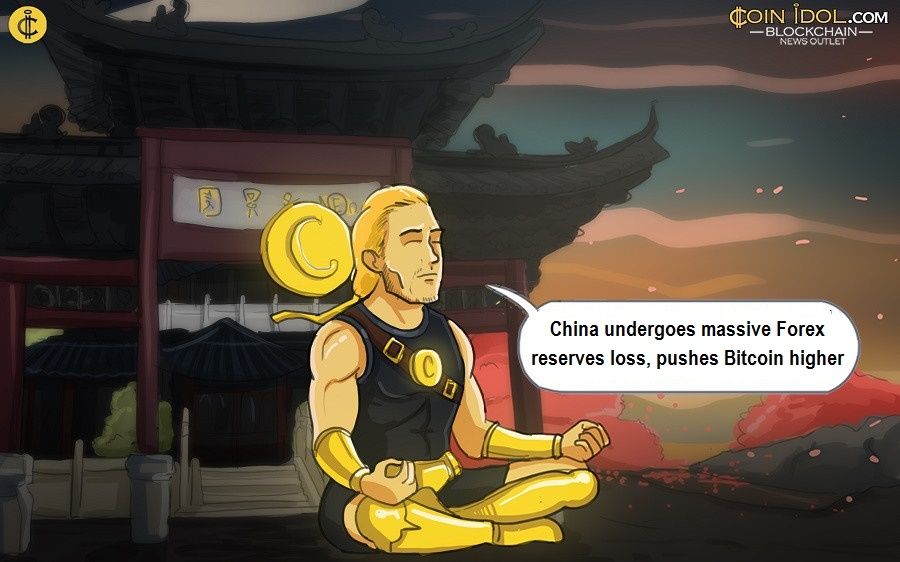 China is losing a good portion of its forex Reserves in, what is considered to be by many people, an attempt to raise the value of the Chinese Yuan. China, which got hit by hard monetary issues through most of 2016, still continues to struggle to completely offset its economic woes.

After a series of attempts by the Government of China to put a halt to the capital outflow crisis, things have continued to worsen economically for China. With the forex reserves at six-year low with only $3 Billion, China seems to be heading in a bad economic direction.

In assessing the relationship between Bitcoin and the problem of reduction in the Forex reserves of China, Coinidol.com spoke to Eugene Lukianov, founder of Notibuyer, a mobile personal assistant, on how bad economic climate can be good for Bitcoin. He commented:

“Bad economic climate right now plays in favour of Bitcoin’s acceptance by more people involved in it on the highest level as well as on lower levels, because old approach does not work anymore, effectiveness falls down to the bottom and intermediaries (banks, governments etc.) do not cope with time challenges. So the time of new economics have come, a healthier, transparent and peer to peer. And in this case, a good and new economic climate plays in favor of Bitcoin.”

Can Bitcoin bridge the wide gap that is most likely going to be left by economic hardships?

Unemployment, reduction in wages and closure of many companies can arise as a result of bad economic conditions. Coinidol.com spoke to Ammar Arsyad, the CMO at Remitano UK, a global bitcoin exchange platform, about whether widespread Bitcoin activities could help minimize the effects of these impacts. He responded by saying:

“Bitcoin will thrive as a new economy as long as there is demand for it. As the bitcoin industry continuously grows with the demand of users and corporations adopting and the blockchain technology, bitcoin will be here to stay. As for the question of will it provide a significant economic support in situations of economics crisis. The answer can be both yes and no. Yes, it can provide support as long as there is a demand for it and a supply that can support the demand. No, if the economic crisis undermines the buying power for the demand. Such as the current situation affecting the China market. Ultimately people still prefer to have cash in hand as a medium. But Bitcoin will continue to thrive regardless because the whole ecosystem surrounding the technology will provide self-sustainability in the long run.”

How crucial are foreign reserves to the economic stability of a country?

On the importance of foreign reserves for the economic stability of a country, Coinidol.com spoke to Parastar Doctor, Deputy manager at DoorstepForex.com, an online Foreign Exchange Marketplace. He said:

“Countries of the World trade with each other, during this trade the payment is made and received in multiple currencies. Example: If the USA and India trade with each other and India exports tea to America. America cannot pay India in US$, they would need to pay India in India's own currency i.e The Indian Rupee. For this purpose, USA would have vast reserves of INR with them, so trade between India and The USA would be smooth and seamless.”