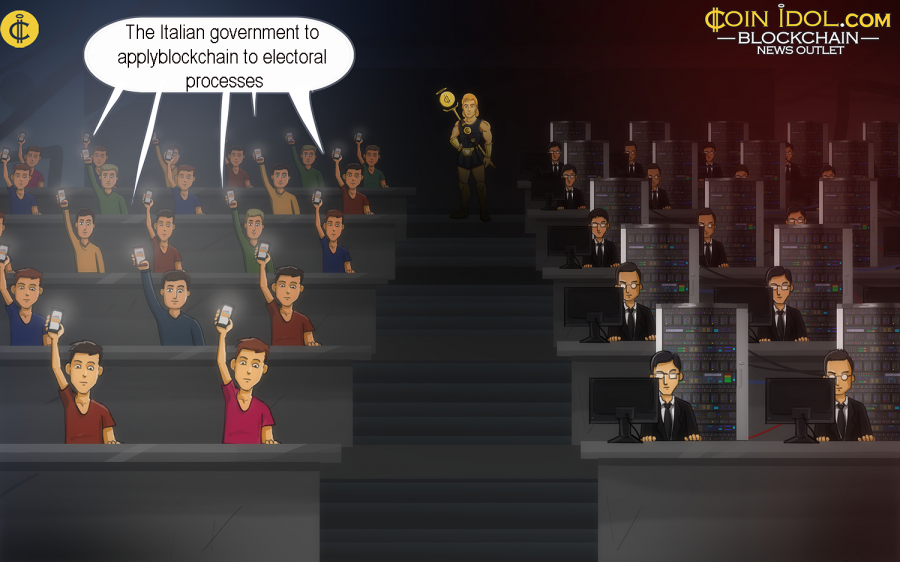 Democratic life can be influenced by innovations such as Blockchain technology, Cryptocurrency, Artificial Intelligence (AI) and others, though there are still many unanswered questions and hunches related to these infant technologies. Now the Italian government wants to apply blockchain to electoral processes in order to enable citizens living across the globe to participate in voting, Fortuneita reports.

To intensify the topic, the Blockchain Italy Summit was set up, which will exemplify the function of decentralization and disintermediation managed by the distributed ledger technology (DLT), following the rationales of “Tokeneconomics.” The meeting is scheduled for Tuesday, February 5 at the Sala della Lupa in the Chamber of Deputies.

Different governments have started delving into blockchain to apply it in their voting processes. For instance, the Thailand government agency NECTEC developed a DLT-based solution to digitalize the voting exercise in the country, as Coinidol reported last month.

“NECTEC developed DLT for e-voting that can be applied to national, provincial or community elections, as well as business votes like the board of directors. The aim is to trim fraud and maintain data integrity,” said Chalee Vorakulpipat, head of the cybersecurity lab at NECTEC.

New Change in the Voting Process

Senator DP Laura Garavini, who with the parent firm DP in the Constitutional Affairs Commission Gennaro Migliore and the Vice-Presidents of the Observatory on the use of Alternative dispute resolution (ADR) systems, are pushing for a reform of foreign voting which employs blockchain technology in the voting exercise of Italian nationals across the globe.

The reform is extremely important because Italians overseas have been missing out on voting, and of those who do participate, their votes have sustained irregularities. The Democratic Party (DP) has been asking for so long how to make the voting process more secure and transparent for all Italian citizens in the world, thanks to blockchain for making this dream come true.

The correspondence voting mechanism has to be the same as the existing one, according to the proposal. The difference will come on the replacement of the electoral certificate, that has been causing a spectrum of problems hence making the voting exercise very complicated.

According to Garavini, around 10% of the total voters voted incorrectly, leading the number of invalid votes to increase. It will be replaced by two stamps, two adhesive Qr codes which the eligible voter will use to the two envelopes that will unchanged.

There will be the entire identification information of the eligible voter in the Qr code, after the voter finishes casting his vote and prepared the envelope ready to be sent, he/she will make a phone call to a switchboard that is fully guided by an AI, requesting for an identifying detail will begin the exercise managed by blockchain.

In this way, according to the Senator of DP:

“Each card will become traceable and recognizable, there will be no risk of 'hoarding' of cards as happened in the past and will start a virtuous process of securing the vote. An extremely safe and convenient process (the process of stripping will be much faster) that will wipe out the risks of fraud that unfortunately have occurred in the past."

According to Francesca Tempesta, DLT can be an instrument for cultural revolution that:

“Starts from the failure of centralized institutions to efficiently guarantee the citizen justice and social solidarity, to which we can return graze to immutability, decentralization, security and transparency in the management of data that the Blockchain allows, being a technology that safely allows the creation of large distributed databases, made of data and transactions between nodes of a computer network.”