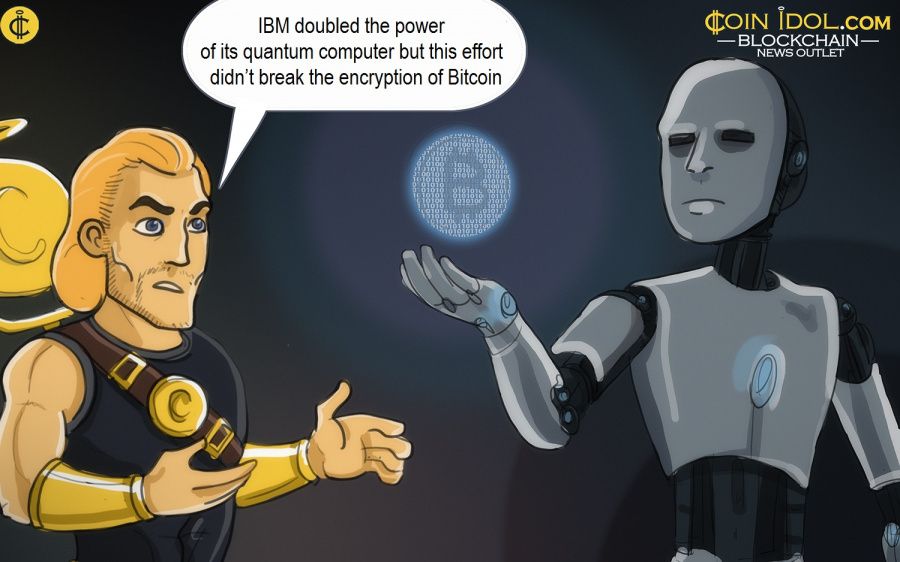 International Business Machines (IBM), an American multinational information technology firm, has managed to double the power of its quantum computer (QC) but this effort didn’t break the encryption of Bitcoin (BTC), the original blockchain-based cryptocurrency.

During the CES 2020 conference that happened on January 8, the company revealed that it fruitfully completed a Quantum Volume (QV) of 32 with the help of its 28-qubit quantum PC called Raleigh.

In a nutshell, Quantum Volume is the metric used to define the intricacy of snags which can be deciphered and worked on by a QC. The QV can be employed to relate the performance of various quantum PCs and the information tech company has successfully doubled this value on a yearly basis, ever since 2016 (four years now).

The computer machines have for a good time been addressed as one of the powerful novelties happening within this very century, with budding applications in well-nigh every single sector such as healthcare, internet of things, artificial intelligence (AI), blockchain, financial modeling, etc.

Even though IBM's state-of-the-art advancements can be thought of as momentous progress, QCs can at this time only be applied for very definite errands, for instance, these machines are many miles in front of the universal classical PCs that we have been familiarly using. Per se, major fears have been developed thinking that these gadgets could be at one point in time be applied to break the cryptography employed to safeguard digital assets such as Bitcoin remain speculative, at any rate for the time being.

It is also claimed that since the system is designed completely around cryptographically protected transactions, then, it requires a much more powerful QC to crack and fissure the encryption that is applied to produce the private keys for BTC. As a matter of fact, as per the paper released in June 2017 by several authors including Martin Roetteler, the type of a quantum computer requires to command processing power of about 2,500 qubits in order to breakdown the 256-bit encryption being used by BTC.

Remember, the most powerful QC that we have now only has about 72-qubit processor, and this implies that it will take more time (in years) to touch encryption-intimidating levels. But that doesn’t rule out the rate at which IBM and Google are trying to double the computing power year-in-year-out, hence becoming major threats to Bitcoin and the entire cryptocurrency community.