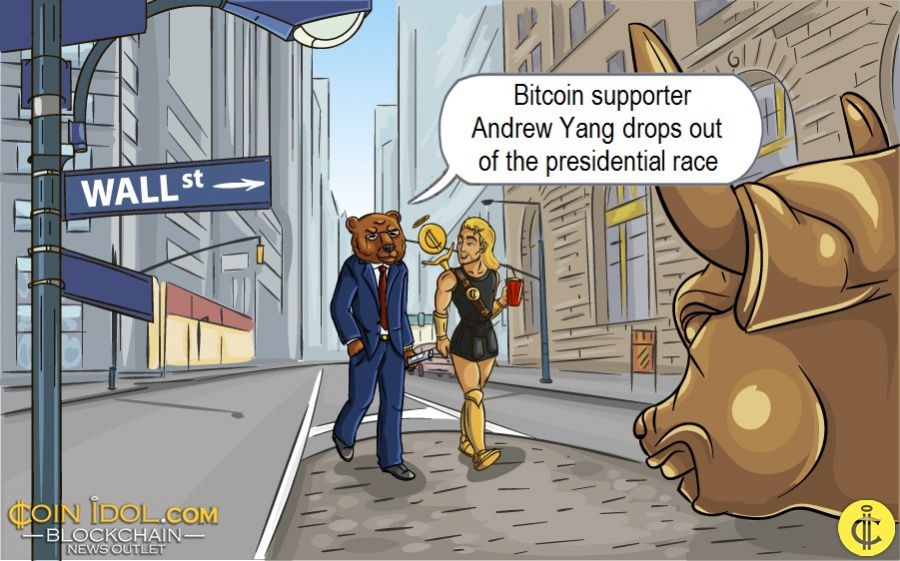 Andrew Yang, the Bitcoin supporter running for US president, dropped out of the presidential race with just nine months left until polling day. Yang who came into the limelight in 2017 after declaring his intentions to run for president is popular for supporting crypto especially bitcoin. Andrew cited small followers as the main reason for dropping out of the competitive upcoming elections.

Presidential candidate Yang got to be known on the campaign trail due to his ambition of introducing a minimum income for every American and his intense support for Bitcoin. Andrew suggested that during his regime, the government would pay every adult American $1000 preferably in Bitcoin every month.

Candidate Yang said the basic $1000 income for every adult would be part of his agenda to achieve universal basic income for all. On the other hand the candidate also planned to introduce new regulations to harmonize activities within the crypto space. Andrew also declared plans to regulate to encourage innovation within the blockchain industry.

At the moment the American government still holds that Bitcoin and other cryptocurrencies are illegal in the country. In his campaign Andrew mentioned that cryptocurrency and Blockchain significantly contributes to the US economy. For that reason he wanted to introduce a clear guideline to control these emerging technologies in the United states.

Andrew Yang announced his love for cryptocurrency earlier in 2017 and gained much support from the crypto community online. As coinidol.com, a world blockchain news outlet, has previously reported, Yang believed cryptocurrency could facilitate the creation of a transparent society. Thousands of cryptocurrency supporters on twitter followed the YangGang HashTag. However it’s important to note that just a small percentage of these people are eligible US voters. He was supported by some prominent personalities of the community, with Elon Musk being one of them.

Nevertheless his policy’s faced criticism from opponents who thought differently about his economic policies. Many of his economic knowledgeable critics opposed the idea of the government giving free money to every adult citizen saying it's unsustainable. Others on the other hand said his support towards Bitcoin is worrying as none of the richest 1% Americans don't agree with Bitcoin and Cryptocurrencies.

Although Mr. Yang's online supporters are in their millions, he realised he actually had very few supporters eligible to vote in the US elections. With a stiff competition poised by popular candidates Yang lacked the numbers to continue with his presidential campaigns. During the Iowa Caucus Yang counted zero delegates and scored barely 3% in New Hampshire.

Tags
Bitcoin USA Presidential candidate Cryptocurrency Elections Government Income Blockchain Support
Most Popular
May 07, 2021 at 12:43
News
Ripple Faces Stiff Resistance at $1.70 High as Bears Attempt to Sink XRP to $1.00 Low
May 07, 2021 at 10:39
News
Revolut Users Will Gain Stronger Control of Their Bitcoins with New Withdrawal Feature
May 07, 2021 at 09:27
News
Binance Coin Retraces to $600 Support and Resumes Upward Move, Further Upside Momentum Likely
May 06, 2021 at 12:32
News
Bitcoin Struggles to Sustain Above $58,000 Support, Lacks Buyers at Higher Price Levels
May 06, 2021 at 11:35
News
Ethereum Is Growing on a Wave of Investment
More