US City Riviera Beach Paid $600,000 in Bitcoin to Cyber Criminals 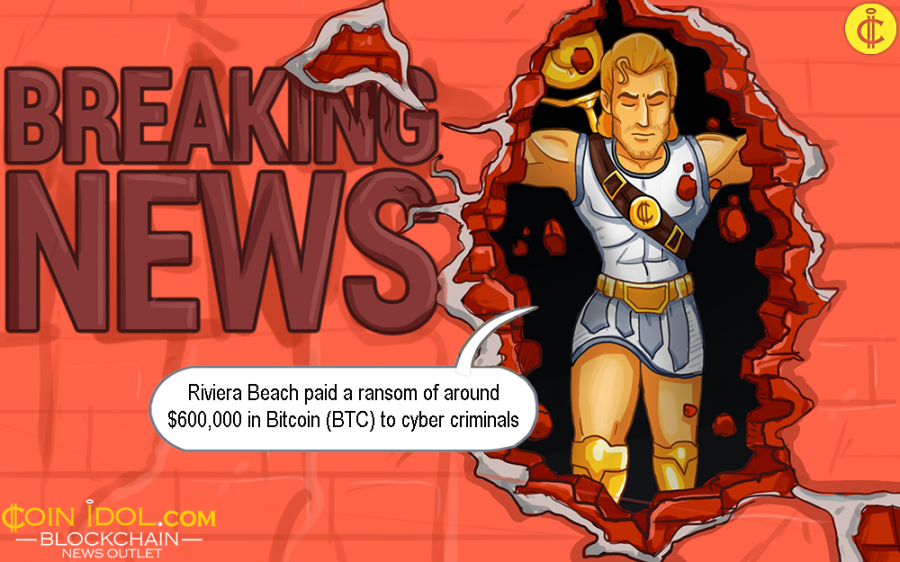 The United States (US) City Riviera Beach, Florida, paid a ransom of around $600,000 in Bitcoin (BTC) to cyber criminals. The anonymous hackers took control of the city’s systems a few weeks back as part of a perturbing tendency striking a multitude number of administrative systems in the US. The attackers demanded the ransom to be paid in Bitcoin, the world’s oldest cryptocurrency.

These conspicuous cyberattacks have made different people and digital asset exchanges from different US cities to fall victims and many of them have actually registered weighty losses. Some of the attacks have been done using malevolent ransomware, that hackers install in the devices of users or exchanges, with the aim of accessing their user account details including private keys, usernames and others.

Be Aware of Hackers

So far, the biggest and worst case scenario is that which appeared in the city of Baltimore where the attackers managed to shut down the government systems and over 10 thousand computers were compromised for a couple of weeks, and this scenario led the city to lose more than $10 million.

While other cities are still confused as whether to pay the ransom or not, one major city has conceded to the demands of the malicious hackers. Riviera Beach has decided to pay $600k in Bitcoin to still unknown attackers, according to Engadget news outlet. The Q1 2019 saw a significant increase of payouts of ransoms to reach around 90%. Remember, the number of victims soared by 500% in 2018, according to the Kaspersky Lab statistics.

Paying the required ransom is assurance that hackers will restore the records belonging to the victims such as Riviera Beach, they can actually decide to demand for more and more ransom since it is too hard to be traced and brought to book. The operation of attacking the city’s systems using the ransomware was fruitful because one of the workers from the police department unknowingly opened up a venomous email containing the ransomware. Every activity was paralyzed to the extent that 900 dispatchers were unable to enter any calls into their network systems.

Paying the Ransom in Bitcoin

According to a report by the Associated Press, the city is going to pay this sum of money to hackers following advice from the city’s security consultants, and all the payments will be handled by the insurance provider of Riviera Beach. However, the city will spend over $941 thousand as a maintenance cost to replace all the affected computers and hardware.

Last year, a town in Canada known as Midland also met hackers' requirements to restore up their computer systems, so as it can run again. The town has around 17,864 and a population density of 447.3/km2.

In a similar way, its computers were infected with a malevolent ransomware and left the computers and other systems not working for more than two days. Under the advice of the town’s cybersecurity specialists, a demanded ransom was paid.