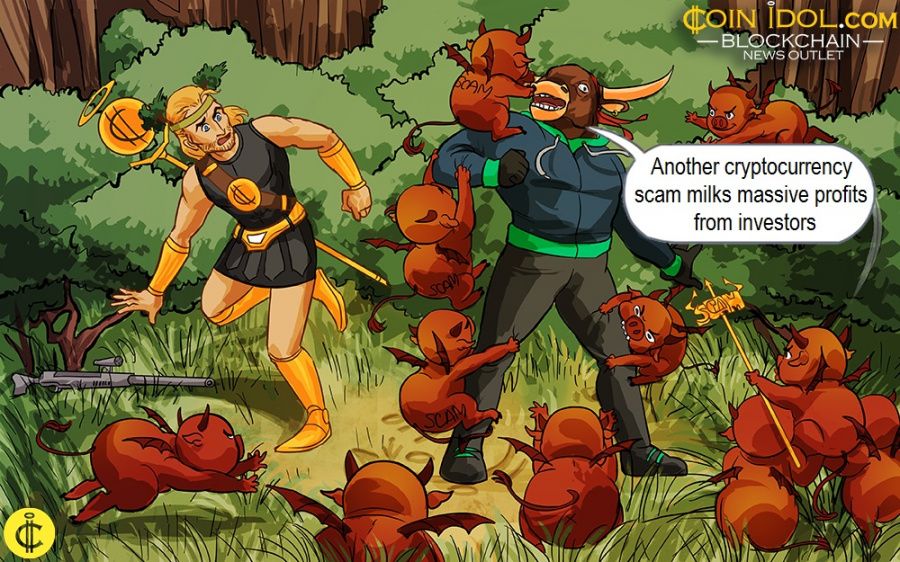 A lot of cryptocurrency users, especially new investors have been scammed left right and center to invest their funds in fake projects related to digital currencies. There is an ongoing cryptocurrency project called “The Billion Coin” that has or continues to milk massive profits from innocent investors.

The investors are being promised abnormal profits (returns) in a shortest time, but it’s now over five years and counting, and no single investor has ever accessed just a single coin from his or her invested money.

The project claims that The Billion Coin (TBC) is not like the other public decentralized market driven tokens available in the market (such as Bitcoin), that the project is private and centralized, introducing the first ever "Abundance-based" coin into the world, aiming at ending poverty in all parts of the globe.

Taking advantage of people’s ignorance over the new innovations

The introduction of blockchain and cryptocurrency technologies is something that has been in this world for not too long. Because of that, those players who are technologically ahead of others in this space have always taken advantage of others, whether in a bad or good way.

The TBC project has been attracting and persuading investors to open up accounts using a certain digital wallet, and then send money to your new account. Users are told that in order to withdraw your money, you have to first pay for a “send button” which is worth $10 USD or else you wait until the project reaches a billion number of verified users within the TBC community and then access, withdraw and use your funds.

Users are being instructed to pay for the “send button” by sending either Bitcoin (BTC), Litecoin (LTC) or Ethereum (ETH) to a specified receiving crypto addresses, and then copy and paste the details of the transactions to their team in order to verify the payments to have your “send button” active and withdraw the funds if you want or wait for it to accumulate (to get higher profits at the end), as you wait for the target amount of users to reach.

As displayed on their website, the project claims that the value of its TBC will never plummet and shall always surge by 1% to 5% every day until it finally hits € 1,000,000,000 per 1 TBC. 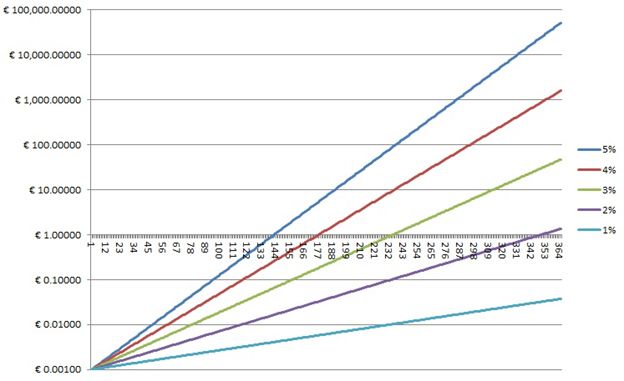 The minimum amount of money you can use to open a TBC account is around $100 and there is no limit. The project has managed to attract many investors from different countries of the world. Some of the countries with a lot of users include Philippine, Nigeria, Uganda, Kenya, the USA, the United Kingdom, South Korea, Ukraine, Spain, China, etc.

TBC lacks digital signatures, has no Chain Proof of Work, and also lacks real Nodes. Generally, it’s all cooked up to fool the beginners and fabricated to smartly steal people’s money. A victim whose names have been reserved opened up an account and invested around $100. After sometime, the amount only increased for a few days and then stopped increasing till now as you can see on the screenshot below. However, until now, the money can’t be withdrawn from the wallet. Investors don’t know where to run to or what to do in order to claim back their money. 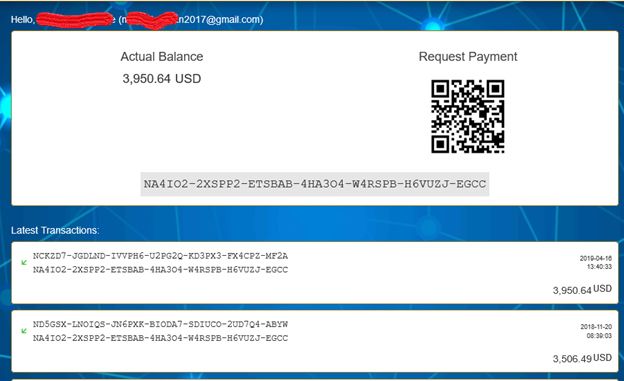 Some reviews from TBC users

Owners of the coin are not even sure they can go to courts of law or have the company dragged in by any financial regulatory agency to give more clarity on the ongoing mischief. A Youtube user named “C” also commented:

“I got scammed completely out of almost $400 is there any way that we can press charges that have got to stop you from scamming people out of their money.”

Most of the victims have lost patience and hope. Some have counted it as a loss. But amidst all the challenges in the world like Coronavirus and the current economic crisis, the fraudster(s) behind the project continue to exploit the community. A redditor known as sos755 commented:

“If you go to the site, you can see that it is obviously a pyramid scheme. The only way you can get your money back is to find some other sucker to buy them from you at an even more ridiculous price than you paid.”

Most people in the cryptocurrency community are showing pessimism on this matter. For instance, one person on bitcointalk called batang_bitcoin reacted:

“It's a total scam and you should think again about supporting that scam coin, it's just a way to make those people believe that it is a real altcoin in the cryptocurrency market. If I were one of the victims, I would find some other interesting altcoins that have realistic goals.”

The scammers know that conducting illegal activities is heavily punished by law but they have still turned a blind eye on this one. For instance, the US authorities punished Attorney Mark Scott for having participated in one of the popular Ponzi schemes OneCoin, by imprisoning him, as Coinidol reported. In order to protect their citizens, some countries including Italy, have actually been blocking and seizing the websites and social pages promoting such scams.

The US Securities and Exchange Commission (SEC) also implicated an ex-Washington senator Dave Schmidt and two other people after being caught involving themselves in a fake scheme and if found guilty they might serve up to 20 years behind bars. Joshua Garza was ordered to be living in prison for 21 months, followed by 36 months of supervised release by U.S. Attorney’s Office District of Connecticut, and also fined around $9 million over Paycoin and GAW fake scheme.

For the case of The Billion Coin project, different authorities have been working closely and undercover to get the full details of the company or person operating this investment-taking scam. And according to the data gathered by the Securities and Exchange Commission of Philippines, the project has been operated by Kris Kringle and it is not authorized to operate anywhere in the world.

“The public must be wary that any promise of ridiculous rates of return with little or no risks is an indication of a Ponzi Scheme where monies from new investors are used in paying fake “profits” to earlier investors. Also, any promise that defies the normal financial logic is surely unreliable and sketchy”, states the document by the Securities and Exchange Commission of Philippines.

There are Nigerian merchants and shops claiming to be buying, selling and accepting TBC as a means of payment when purchasing goods and services. For instance, a shop called Kavwin Nigeria, claims to be accepting the coin. Other online shops that accept the coin in question include Gadgetslite; Blaizmail; and Ww8.danayanggrocery.com.

Albeit, all of their media pages on Twitter and Facebook are long dead and anyone willing to join it will just send money to a dead project. 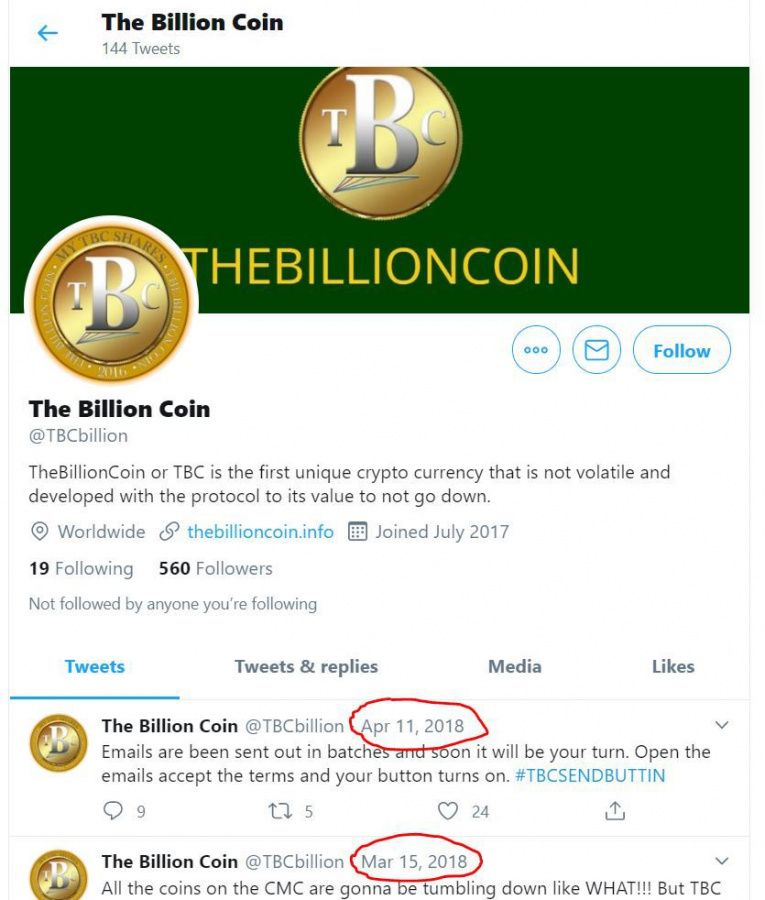 Despite the TBC scam seems to be dead, some fraudulent actions are still ongoing, and new investors continue to multiply like a wildfire. However, no investor is getting or earning from this project legitimately, those who are earning are doing it by scamming other new/ignorant friends/users/investors to buy on a peer-to-peer (P2P) system, in so doing, the numbers keep on expanding.